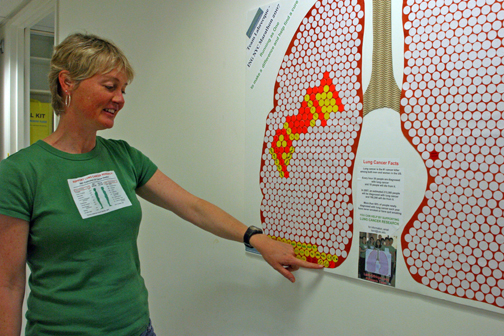 In the war on lung cancer, Keck School of Medicine researcher Ite Laird-Offringa surveys the battlefield and zeros in on promising targets.

Laird-Offringa, associate professor of surgery and biochemistry and molecular biology, recently received a second R01 grant from the National Cancer Institute�a five-year, $1.5 million award to search the genome for DNA-silencing methylation changes during the progression of lung adenocarcinoma, currently the most common lung cancer in the U.S.

Funded by a separate two-year grant from the Joan’s Legacy and Thomas G. Labrecque Foundations, Laird-Offringa is also examining a select few genes already known to undergo methylation during the disease.

The researchers are especially interested in small lung lesions known as atypical adenomatous hyperplasia, or AAH. Laird-Offringa said the tiny lesions, which make an afflicted lung appear to have too many cells, could be cancer precursors, especially if their cells share some of the same abnormal gene methylations as adenocarcinoma cells.

“There’s a lot of methylation in a full-blown case of cancer,” she said. “AAH lesions might not have as much methylation and gene silencing yet, but could eventually develop into cancer.”

Laird-Offringa added that bronchial alveolar carcinoma could be an intermediate stage between the barely-noticeable AAH lesions and the invasive adenocarcinoma.

Identifying any cancer precursors before they turn into their deadliest forms could save more lives�many patients are diagnosed with lung cancer only after the disease has reached a late stage and more than 160,000 Americans fall victim to the disease each year, according to the American Cancer Society.

“The fact that so many people are dying from this disease is a major driving force behind our search for early molecular diagnostic markers,” Laird-Offringa said.

SIDEBAR:
Fighting cancer a step at a time — for 26.2 miles

Ite Laird-Offringa, associate professor of biochemistry and molecular biology and surgery at the Keck School, understands more than just the science of lung cancer—she knows the heartbreak involved as well.

The names of two uncles who succumbed to the disease occupy yellow stickers on a poster depicting a pair of lungs that documents the fundraising efforts of Laird-Offringa and her 75-year-old father, Gerben Offringa.

The two hope to raise at least $2,500 each for the Thomas G. Labreque Foundation, a non-profit lung cancer research support organization that has funded a two-year research project in Laird-Offringa’s laboratory.

Together with Labrecque supporters from across the country, they plan to run the 26.2-mile New York Marathon on Nov. 4 and draw attention to lung cancer research.

For $10, $20 or $50, one or more yellow, orange or red stickers with a dedication can be placed on the poster, filling the blank spots that represent the gaps in lung cancer funding, Laird-Offringa said. Multiple stickers with single letters can also be purchased to spell out a larger message.

Checks made payable to the Thomas Labrecque Foundation (please include “Team Laird-Offringa” in the memo) may be sent to Ite Laird-Offringa, USC/Norris Cancer Center, Room NOR6420, 1441 Eastlake Ave, Los Angeles, CA 90089-9176.