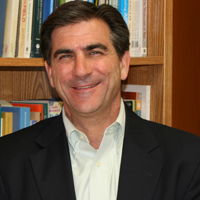 The study was conducted by Thomas W. Valente, associate professor of preventive medicine at the Keck School of Medicine.

A new study by USC researchers suggests that some TV may be good for you.

Researchers found that a storyline on the long-running NBC drama ER that dealt with teen obesity, hypertension and healthy eating habits had a positive impact on the attitudes and behaviors of viewers, particularly among men.

The study, published in the Sept. 14 Journal of Health Communication, offered researchers a rare opportunity to evaluate the impact of health messages in entertainment, said Thomas W. Valente, associate professor of preventive medicine and member of the Institute for Health Promotion & Disease Prevention Research at the Keck School of Medicine of USC.

“This study demonstrates the importance of interventions and programs targeted at a population level,” Valente said. “We have so many public health issues to deal with, we can’t restrict ourselves to any one strategy. We have to do everything and anything we can to help people improve their health.”

The storyline depicted an African-American teen, diagnosed with hypertension during a visit to the emergency room, who is advised to eat more fruits and vegetables and to get more exercise. The story aired over three episodes from April 29 to May 13, 2004.

The impact of the episodes was evaluated using three separate datasets, one of which provided data on a sample of 807 prime-time viewers before and after the episodes aired. An independent firm collected surveys from viewers, measuring whether their self-reported behavior and their nutrition attitudes, knowledge and practices were impacted by the storyline.

Results showed that ER viewers were 65 percent more likely to report a positive change in their behavior after watching the episodes. The results also suggested that the storyline had modest impacts on knowledge, attitudes and practices, Valente noted. Those who watched ER also had a five percent higher rate of knowledge about nutrition than those who did not. Researchers accounted for a number of factors, including age, sex, ethnicity, income and education.

Interestingly, the effects were stronger for men than they were for women. Researchers theorized this may be because men started with a lower baseline knowledge of the information shown in the episodes, Valente said.

While the overall impact may be relatively small, the study highlighted the potential of entertainment television as a medium for health communication, Valente said. It can be particularly helpful since people who are heavy TV watchers are more likely to be at risk for obesity, he noted.

“People get their information from entertainment,” Valente said. “It’s not a magic bullet. It’s a small piece of the puzzle, but we’d be silly to ignore its potential.”

Public health experts should also be involved in shaping the health messages that go out to viewers, he said. For the ER storyline, writers from the show contacted the Hollywood, Health & Society project at the USC Annenberg School for Communication’s Norman Lear Center to request information on the prevalence of hypertension and heart disease among overweight teens.

The findings of the study highlight why such programs are necessary to public health efforts, Valente explained.

“We should do everything we can to help ensure the accuracy of health messages in the media,” he said.

Funding for the study came from the Centers for Disease Control and Prevention.