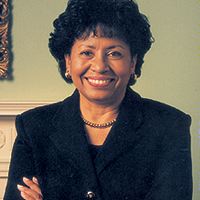 To the ringing applause of friends, family members and alumni, nearly 9,000 graduates will receive their degrees at USC’s 120th commencement ceremony May 16.

Brown University President Ruth Simmons will deliver the commencement address to more than 40,000 graduates and visitors.

A gifted educator and administrator, Simmons is the first African American president of an Ivy League institution. Early in her career, Simmons served as assistant dean and then associate dean of graduate studies at USC.

The day’s festivities will begin at 8:30 a.m., with the processional march into Alumni Memorial Park. The commencement ceremony will start at 9 a.m., with Rabbi Susan Laemmle, dean of religious life, delivering the invocation.

President Steven B. Sample then will confer 4,558 bachelor’s degrees, 3,519 master’s degrees, 833 doctorates and 105 graduate certificates. Those numbers include students who finished their degree programs in the fall of 2002, as well as those who will be completing course work over the summer.

In addition to Simmons, three members of the Trojan Family will receive honorary degrees. They are:

Mary Ellen Avery, president of the American Association for the Advancement of Science, is the Thomas Morgan Rotch Distinguished Professor of Pediatrics (emeritus) at Harvard Medical School and a pioneer in the field of newborn medicine; and

Philanthropist and USC trustee Wallis Annenberg, vice president of the Annenberg Foundation, representing the second generation of a family that has committed more than $300 million to the advancement of the university.

Valedictorian Kevin Huoh also will speak during the proceedings, which will be Webcast live via the Internet.

Following the main ceremony, most graduates – along with their families – will disperse to the satellite ceremonies of their respective schools.

Graduates and visitors can expect a few changes in the commencement proceedings this year, said John Callaghan, now serving his 11th year as director of the event.

For the first time, Ph.D. recipients will march in the main processional from the newly renovated Bovard Auditorium, just ahead of faculty members. In previous years, they had entered from the side to take their seats.

“We feel that they deserve this,” said Callaghan. “It should enhance the processional enormously.”

Another difference: ROTC graduates will be sitting among fellow graduates. In past years, they were seated separately, in front of the ceremony platform.

“Merging them makes them much more a part of the academic units,” said Callaghan. Accordingly, ROTC instructional officers will walk with the faculty during the processional.

On a sentimental note, Callaghan said, Tillman Hall, who for 26 years served as university marshal, will march as one of the marshals for the university faculty. It is likely to be his last appearance in this role.

Preceding the commencement ceremony are two days of festivities and recognition events.

On May 14, the Phi Beta Kappa Initiation Ceremony will be held at 1:30 p.m. in Bing Theater.

The May 15 proceedings will start at 9:30 a.m. with the Graduate School Doctoral Hooding Ceremony at Bovard Auditorium.

That evening, the Chicano/Latino and Black Students ceremonies will get underway at 8 p.m., at Howard Jones Field and Bovard Auditorium, respectively.

The centerpiece of Thursday’s program is the annual Baccalaureate Ceremony, which will begin at 5 p.m. at Bovard, followed by the Baccalaureate Dinner at 6:30 p.m. at Pardee Way.

This year’s baccalaureate speaker is Professor Nicky Singh, chair of religious studies at Colby College in Maine. Singh is the first Sikh to speak at the event.

The 1,200 seats made available for the dinner sold out quickly. “It’s become a marvelous tradition in just five years,” said Callaghan.