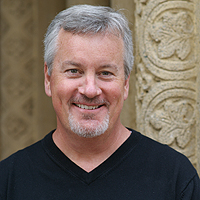 In contrast to what is often inferred from the geologic record, carbon dioxide did not cause the end of the last ice age, a new USC study published in Science suggests.

“There has been this continual reference to the correspondence between CO2 and climate change as reflected in ice core records as justification for the role of CO2 in climate change,” said paleoclimatologist Lowell Stott, the study’s lead author and a professor of earth sciences at USC College.

“You can no longer argue that CO2 alone caused the end of the ice ages.”

Deep-sea temperatures warmed about 1,300 years before the tropical surface ocean and well before the rise in atmospheric CO2, the study found. The finding suggests the rise in greenhouse gas was likely a result of warming � but not its main cause.

However, the study does not question the fact that CO2 plays a key role in climate.

“I don’t want anyone to leave thinking that this is evidence that CO2 doesn’t affect climate,” Stott cautioned. “It does, but the important point is that CO2 is not the beginning and end of climate change.”

While an increase in atmospheric CO2 and the end of the ice ages occurred at roughly the same time, scientists have debated whether CO2 caused the warming or was released later by an already warming sea.

The best estimate from other studies of when CO2 began to rise is no earlier than 18,000 years ago. Yet this study shows that the deep sea, which reflects a good picture of oceanic temperature trends, started warming about 19,000 years ago.

“What this means is that a lot of energy went into the ocean long before the rise in atmospheric CO2,” Stott said.

But where did this energy come from? Evidence pointed southward.

Water’s salinity and temperature are properties that can be used to trace its origin � and the warming deep water appeared to come from the Antarctic Ocean, the scientists wrote.

This water then was transported northward over 1,000 years via well-known deep-sea currents, a conclusion supported by carbon-dating evidence.

In addition, the researchers noted that the increases in deep-sea temperature coincided with the retreat of Antarctic sea ice, both occurring 19,000 years ago, before the northern hemisphere’s ice retreat began.

Finally, Stott and colleagues found a correlation between melting Antarctic sea ice and increased springtime solar radiation over Antarctica, suggesting this was the energy source.

As the sun pumped in heat, the warming accelerated because of sea-ice albedo feedbacks, in which retreating ice exposes more of the ocean that can absorb heat from the sun, much like a dark T-shirt on a hot day, and this results in more melting.

In addition, the authors’ model showed how changed ocean conditions may have been responsible for the release of CO2 from the ocean into the atmosphere, which like the albedo feedbacks, also accelerated the warming.

The link between the sun and ice age cycles is not new. The theory of Milankovitch cycles states that periodic changes in Earth’s orbit cause increased summertime solar radiation in the northern hemisphere, which controls ice size.

Stott and colleagues arrived at their results by studying a unique sediment core from the western Pacific composed of fossilized surface-dwelling (planktonic) and bottom-dwelling (benthic) organisms.

These organisms � foraminifera � incorporate different isotopes of oxygen from ocean water into their calcite shells, depending on the temperature, and by measuring the change in these isotopes in shells of different ages, it is possible to reconstruct how the deep and surface ocean temperatures changed through time.

If CO2 caused the warming, one would expect surface temperatures to increase before deep-sea temperatures, since the heat slowly would spread from top to bottom. Instead, carbon-dating showed that the water used by the bottom-dwelling organisms began warming about 1,300 years before the water used by surface-dwelling ones, suggesting that the warming spread bottom-up instead.

“The climate dynamic is much more complex than simply saying that CO2 rises and the temperature warms,” Stott said. The complexities “have to be understood in order to appreciate how the climate system has changed in the past and how it will change in the future.”

Stott is an expert in paleoclimatology and was a reviewer for the Intergovernmental Panel on Climate Change. He also recently co-authored a paper in Geophysical Research Letters tracing a 900-year history of monsoon variability in India.

The study, which analyzed isotopes in cave stalagmites, found correlations between recorded famines and monsoon failures, and found that some past monsoon failures appear to have lasted much longer than those that occurred during recorded history. The ongoing research is aimed at shedding light on the monsoon’s poorly understood but vital role in Earth’s climate.

Clues to End of the Last Ice Age