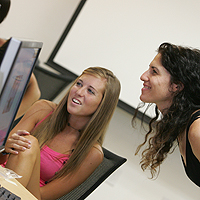 Though many people recently were stunned when an Associated Press-Ipsos poll reported that more than one quarter of American adults did not read a single book in the past year, Holly Willis wasn’t surprised in the least.

“The primacy of static print is over,” said Willis, the newly installed managing director of the USC Institute for Multimedia Literacy. “That’s not to say text is dead. To the contrary, it’s combining with the media of today � sound and image � to create meaning in ways we’ve only begun to understand.”

Perfecting that understanding has been the core mission of the institute for the past decade. Born out of a discussion between USC School of Cinematic Arts Dean Elizabeth M. Daley and filmmaker George Lucas in 1998, the institute has grown from a small research project in the former USC Annenberg Center for Communication to a full-blown organized research unit within the School of Cinematic Arts.

“Our base in the school is natural, given that we’re dealing so extensively with sound and image,” Willis said. “However, the IML goes well beyond film production, borrowing equally from the interactive media and critical studies divisions so that our students are adept in thinking across multiple media platforms with critical sophistication.

“Indeed, we want to make sure there are applications for the entire university in everything we do,” she continued. “So we’re not about teaching how to make film or television. We’re about mastering the core elements of these media and understanding how images and sound serve to build an expanded form of literacy that includes critical reading and writing practices, as well as visual and computational literacy. We think this expanded literacy is absolutely vital for informed participation in the 21st century.”

Since its founding, the Institute for Media Literacy has worked with more than 100 faculty members at USC and beyond, in addition to scores of K-12 teachers, to hone the philosophy and teaching methods of a literacy based on multiple media � from text to audio files and other database-based resources.

“What sets the IML apart from traditional ‘media literacy’ initiatives is that it’s not centered on interpreting how others are using such media,” said professor Anne Balsamo, who preceded Willis as the institute’s managing director and who now will be in charge of the organization’s research efforts.

“Rather, the IML is focused on enabling our students and scholars to be creators in their own right. To explore themselves, their world and the part they have in it,” added Balsamo, who also serves on the faculty of the Interactive Media Division and has a joint appointment in gender studies in USC College.

Building on its long history of working directly with students, teachers and scholars, one of the institute’s major concentrations is its collaboration with USC College to conduct “Multimedia in the Core” classes. The joint effort unites general education courses with a hands-on practicum using an expansive media lab in the heart of the Taper Hall of Humanities. More than 200 students have taken courses since the program’s inception in September 2006.

“Last year Provost Nikias gave the IML and the College a mandate to prepare our students to be fully capable of expressing themselves in the modern world, to communicate with an array of tools beyond the written word,” Willis said. “Over the past two semesters, we’ve seen students with little prior media experience produce work that is nothing less than phenomenal.”

“We have two state-of-the-art multimedia labs with around 22 computers in each one,” he said. “Students can also check out video cameras, still cameras and audio recorders to do multimedia production. Some have even returned after a semester to take more of the core multimedia program classes.”

Those classes run the gamut. Students in a geology class studying earthquakes are making Flash animations to illustrate how earthquakes function, while students in the “Religions of the West” class are creating interactive essays.

The institute also offers a four-year Honors in Multimedia Scholarship program designed to teach students across the university to craft scholarly multimedia projects in their majors. In addition, the institute’s staff is currently exploring other innovative areas, including the development of educational spaces within Second Life, a multi-user virtual environment. Their experiments range from creating virtual classes to a special project that visiting assistant professor Peggy Weil is doing to represent the experience of being in the U.S. military prison at Guantanamo Bay.

When it was released, many people interpreted the AP poll about the decline of book reading as a negative sign. But the flip side is that use of other kinds of media such as online video sites, blogs and other digital outlets has grown exponentially. With some 10 years of expertise in this area, Willis believes the institute is well suited to prepare USC students to master the dramatic shift that sound and image have in today’s communications environment.

“Students enter USC with such amazing skills, but often they’re not significantly thinking about the devices they have in their possession like cell phones, iPods and laptops,” Willis noted. “Part of what we do is help take a step back and look at what you do when you present yourself in an online network, for example. How can we use these pervasive tools in smart ways and in academic settings?

“In short, how can we mobilize images, sounds and interactivity into all areas of our scholarly work here at USC?”

Paving the Way for Multimedia Literacy