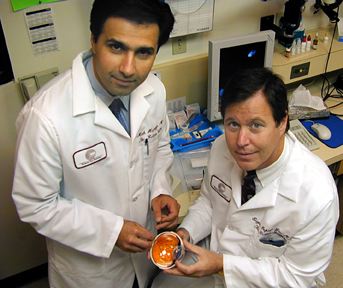 Researchers from the Keck School of Medicine, the Doheny Retina Institute and Second Sight, LLC, are reporting on the initial results of their groundbreaking, FDA-approved feasibility trial of an intraocular retinal prosthesis that appears to be able to restore some degree of sight to the blind.

“We have successfully completed enrollment and implantation of three patients in the trial,” said Mark Humayun, Keck School professor of ophthalmology.

“And we have found that the devices are indeed electrically conducting, and can be used by the patients to detect light or even to distinguish between objects such as a cup or plate in forced choice tests conducted with one patient so far,” he added.

The results were presented at the Retinal Prosthesis I session of the annual meeting of the Association for Research in Vision and Ophthalmology, or ARVO, held May 4 through 9 in Fort Lauderdale, Fla. Humayun, who was moderator of the session, also presented a paper detailing the results of the trial.

In addition, he and his group from USC’s Doheny Retina Institute displayed six posters in sessions throughout the week.

The microelectronic retinal prosthesis used in this first phase of the trial is intended to stand in for the damaged retinal cells in people suffering from such blinding diseases as retinitis pigmentosa and macular degeneration.

The implant measures 4 millimeters by 5 millimeters, and is studded with 16 electrodes in a 4-by-4 array. The device has been developed by Sylmar, Calif.-based Second Sight, LLC.

The retinal prosthesis—a sliver of silicone and platinum that is often incorrectly referred to as an “eye chip”—is attached to and sits atop the retina.

It works by electrically stimulating the remaining healthy retinal cells via the array of electrodes; the retinal cells, in turn, pass on the visual information to the brain via the optic nerve.

Initial tests in the three implanted patients have shown that they can perceive light on each of the 16 electrodes.

Testing conducted so far in some of the patients with the microelectronic implant revealed that they were capable of detecting when a light is turned on or off, describing the motion of an object, and even counting discrete objects.

The first tests of the prosthesis in all three patients involved computer-generated points of light sent directly to the implant, said Humayun.

Over time, they were “graduated” to images received by an external video camera. These images are sent to the intraocular electrode array attached to the retina via a receiver that is implanted behind the patient’s ear during the implant surgery. The signal is then recreated by stimulating the appropriate electrodes in the prosthesis.

Testing on the three patients is ongoing, said Humayun.

“We plan in the near future to look at how useful the prosthesis can be in activities of daily living,” he noted.

The National Institutes of Health/National Eye Institute and Second Sight, LLC, provided funding to support the research and development of the retinal prosthesis implanted in this trial.

The National Science Foundation, the Department of Energy, the Office of Naval Research, the Whitaker Foundation, The Foundation Fighting Blindness, the Defense Advanced Research Projects Agency and Second Sight, LLC, have provided other funding toward the development of a retinal prosthesis.