The Los Angeles Times Festival of Books — the largest literary and cultural festival in the nation — gets underway Sunday with four weeks of online events through Nov. 13.

Here are links to Festival of Books events featuring Trojans; the full schedule is online.

People Have the Power? Electoral Politics and Democracy

Roots to Routes: Immigration and Race in L.A.

Civic Memory and the Future of L.A.

Chicken of the Sea by Viet Thanh Nguyen and Ellison Nguyen

A reading and conversation with the author and illustrator, 11-11:45 a.m. Sunday, Nov. 1
Watch online

The festival, in its 25th year, traditionally takes place in April on the USC University Park Campus but was rescheduled due to the COVID-19 pandemic. Last year’s event drew more than 150,000 attendees over two days to USC, the festival’s home since 2011. 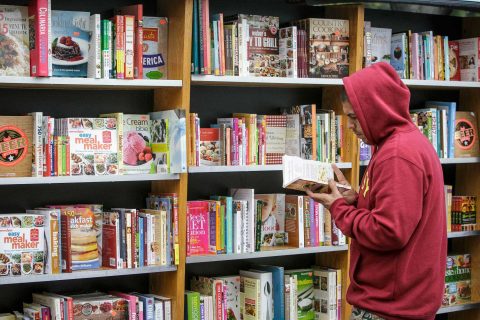 This year’s schedule of events — all free to the public — features 25 panels and readings over 25 days, highlighting writers, poets, artists, storytellers and bookstore exhibitors.

In addition to the Trojan Marching Band on Sunday, students from the USC Kaufman School of Dance will perform at 5 p.m. Nov. 6.

The complete schedule is posted on the festival website, where you can preregister for each event.

The Festival of Books is a partnership between the Times and USC. In April, a dozen authors were awarded this year’s Los Angeles Times Book Prizes, awards that are usually presented during the festival.

Next year’s festival is scheduled to take place on the USC University Park Campus on April 17-18.

In its 25th year, the annual L.A. Times Festival of Books is scheduled to return to USC this fall.

The event — the nation’s largest literary and cultural festival — traditionally draws more than 150,000 people to the USC University Park Campus.

The event — the largest literary and cultural festival in the nation — attracted more than 150,000 people.