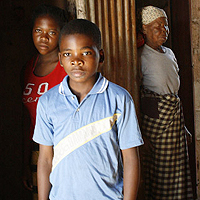 Project participant Latifa shot this image of a family in Mozambique.

Latifa was 6 years old when she was orphaned by AIDS. Today, she and six siblings live in their parents’ one-room home in Maputo, Mozambique, with their 18-year-old brother as head of the household.

In August, the now 11-year-old Latifa and 25 other AIDS orphans in Maputo worked with American photographers and filmmakers to document their lives. Her photos have been published online, and her story is being shared with readers around the world.

The project, conducted by Venice Arts, is among a burgeoning movement of “participant-produced” photography and film programs that give traditionally marginalized and underrepresented communities a direct way of communicating about their struggles and accomplishments, raising awareness that can lead to social change.

Venice Arts is teaming with the USC Annenberg’s Center on Communication Leadership and the USC Center on Public Diplomacy to launch the Institute for Photographic Empowerment, a unique university-community partnership to support the study and practice of participant-produced documentary projects in photography, film and digital media.

“A social phenomenon is emerging in countless communities and countries that we think deserves to be celebrated, replicated, studied and identified,” said Geoffrey Cowan, University Professor and director of the Center for Communication Leadership.

“The institute combines the resources, energies and contacts of Venice Arts and USC Annenberg. Venice Arts has compiled a remarkable record in the United States and the world – from helping the homeless document their lives to giving voice to women in Africa who are living with HIV-AIDS. At USC Annenberg, scholars are studying the impact of these images on communities and individuals.”

Cowan and the other principals of the institute – Lynn Warshafsky, Venice Arts’ co-founder; Joshua Fouts, director of the USC Center on Public Diplomacy; Neal Baer, executive producer of the NBC series Law and Order: Special Victims Unit and a Venice Arts’ board member; and Jim Hubbard, acclaimed documentary photographer and Venice Arts’ creative director – announced the institute’s creation at a press briefing this month.

“This is an extraordinary opportunity to develop a growing field by bringing a cross-section of people together in practice, study and research,” Warshafsky said. “More importantly, it provides new opportunities for those of us who have been working in communities for many years to better advocate for social change and to support those who tend to be the most voiceless amongst us by lifting up their powerful visual stories for the world to see.”

The Institute is the first of its kind and will serve as a resource for photographers, filmmakers, academics, researchers and project participants to share best practices and develop this important and burgeoning field. It will:

Hubbard began putting cameras into the hands of homeless and Native American children through his Shooting Back project more than 20 years ago. Instead of having outsiders – documentary photographers – produce the work, his method has the subjects themselves take the pictures.

The USC Annenberg School will offer its first class on this topic in the Spring 2008 semester. Taught by Hubbard, the course is titled “Visual Communication and Social Change” (COMM 499).