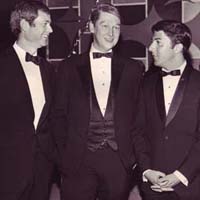 In 1967, a movie review in The New York Times described The Graduate as a film “you’ll have to see” perhaps twice to savor all its sharp, satiric wit and cinematic treats.

Forty years after its debut, not even the movie’s producer Larry Turman could have imagined how the film would be watched over and over, still resonating with audiences worldwide.

“It would be presumptuous of me to know why the film has achieved its reputation, but it clearly hit the zeitgeist of the times then and that seems operative in today’s world,” said Turman, who has been director of the Peter Stark Producing Program for 16 years.

Based on the novel by Charles Webb, directed by Mike Nichols and written by Calder Willingham and Buck Henry, The Graduate revolves around Benjamin (Dustin Hoffman), a young man worried about his future who finds himself seduced into an affair by the wife of his father’s business partner, the infamous Mrs. Robinson (Anne Bancroft), while unexpectedly falling in love with her teenage daughter (Katharine Ross).

Instantly drawn to Webb’s book and its theme of materialism versus following one’s heart, Turman � already a successful producer of films such as The Young Doctors (1961), starring Fredric March, and I Could Go On Singing (1963), with Judy Garland � optioned the rights with his own money. With no major studio interest and questions surrounding the film’s worth and comedic elements, Turman “slogged forever to get the financing.”

After watching Nichols’ Broadway hit Barefoot in the Park, a production “just oozing good direction,” Turman knew the “modern and hip humor” of the future Oscar-winning director was the perfect quality he was seeking in the person at his picture’s helm.

“We were smart and lucky both,” recalled Turman, when asked about the film’s cast and how he and his team considered more than 200 young men for the role of Benjamin. “It’s an uphill climb if an actor is not right for a role. Casting is an essential responsibility for any producer,” he said.

The filmmaking process of The Graduate was collaborative in every sense of the word, with Turman working with everyone from the writers to his choice of Simon and Garfunkel for the film’s classic soundtrack. The producer was “always accessible. If there was a problem that required my attention, I was there in 30 seconds.”

In today’s film arena, where the producer credit has become negotiable and a plethora of names scroll across movie screens, Turman said it is still important to never devalue a person’s role.

“It all begins because one person said “I want to make this into a movie and I know how,” Turman observed. “No matter what, the producer got that picture made.”

Recounting how Westwood theatre owners sought to book The Graduate only after the picture was a hit, Turman said it is important to realize that with the exception of blockbuster franchises such as Spider-Man and Harry Potter, predicting what will score big at the box office is an ongoing mystery.

“No one knows how to chase the money,” he said. “It’s a wonderfully exciting high-stakes crapshoot.”

And with the film’s upcoming 40th anniversary shining a bright light on The Graduate, ranked No. 7 on the American Film Institute’s list of America’s 100 Greatest Movies, Turman is proud that his project has held up over time.

“Recently, there was an ad in Variety that likened Knocked Up to The Graduate,” Turman said. “Forty years later, people are still calling it a great picture and evoking it when discussing today’s films. It means nothing in the great scheme of things, but it’s a warm and gratifying feeling.”

Still Seductive After All These Years