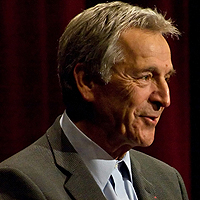 Costa-Gavras discusses his career at the Norris Theatre.

Award-winning director, screenwriter and producer Costa-Gavras, 74, was presented with the second Eisenstein Award during the opening reception of a two-day festival of his work at the USC School of Cinematic Arts on Sept. 28.

Named after the Russian director and film theorist Sergei Eisenstein, the award has been presented only once before, in 2003 to French filmmaker Agnes Varda.

“The lessons gleaned from sources like our distinguished recipient tonight are what make the difference between a filmmaker and a better filmmaker,” said Dean Elizabeth M. Daley to the guests gathered at the Norris Theatre, including the director’s wife Michele Ray-Gavras and daughter Julie Gavras. “He is also an inspiration to generations of women and men who are refining their talent at USC. We are so proud to honor him tonight.”

Internationally celebrated for nearly four decades, Costa-Gavras has shed light on many of the most egregious violations of political and human rights throughout the world. By merging timely political issues with a keen talent for the thriller genre, the director consistently has exposed the injustices of oppressive, violent and corrupt societies throughout the 20th century.

“Z captured the attention of audiences worldwide, demonstrating to financiers that films with political themes could be simultaneously provocative and solid box office,” said Associate Dean Michael Renov. “The tautness of the dramas he creates, the compelling performances he elicits from his actors and the grittiness of the mise-en-scene he composes � it is the extraordinary cinematic realization of these themes that we honor shere tonight.”

Echoing the evening’s theme of theory and practice, Costa-Gavras said it was always important for him to start from theory and philosophy when approaching his work.

“I am deeply honored to have this award,” he added.

With that, the festival was under way with a screening of Missing (1982), followed by a brief Q&A session between the filmmaker and the audience.

On Sept. 29, the director’s 2005 film The Ax opened the afternoon festivities. The movie was followed by 2002’s Amen, after which production professor Jeremy Kagan moderated a panel discussion about political cinema with the director, his wife Michele,professor Steven J. Ross, chair of the USC College history department, and professor John Michalczyk, chair of the fine arts department at Boston College and author of Costa-Gavras: The Political Fiction Film.

The weekend concluded with Costa-Gavras introducing a screening of Z.

A Filmmaker’s Highpoints: From A to Z