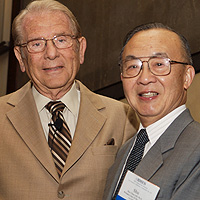 “I have devoted my life to addressing a variety of unmet or underserved medical needs,” Mann said. “To address these needs, I have founded and led some 15 companies. Of these, I have sold seven, taken two public and all the others are still evolving.”

Mann, whose companies have created and marketed biomedical devices such as pacemakers, neurostimulators, insulin pumps, cochlear implants and retinal implants, noted that he had no business background and no entrepreneurial expectations when he began working as a young electro-optical physics scientist 51 years ago.

The U.S. Army helped him start his first company, Spectrolab, so he could help them with an antitank missile guidance control system.

Mann covered a list of key requirements for success in business that included capital, leadership, management, people, marketing, manufacturing and “the product itself.”

“What usually happens is that a researcher discovers a new technology and decides to use that discovery to create a product or business,” Mann said. “By contrast, the path I have generally pursued is in reverse. I have usually first identified an unmet need and then I try to come up with the most promising technologies to address that market need.”

Diabetes is a case in point. Mann identified a need and then aggressively developed and marketed the technologies to meet the need. He made insulin pumps to help patients better manage their blood sugar levels.

“The epidemic of diabetes today is frightening and, if we do not find a solution, these diseases, especially type two, will not only devastate humanity but will likely bankrupt the world,” he said.

Positive feedback from patients about Mann’s insulin pumps, sold by MiniMed, led him to form another company, MannKind Corp., to work on more advanced diabetes therapies. The company has created an inhaler that allows patients to deeply breathe in a proprietary insulin formulation delivering insulin much more rapidly to the bloodstream than is possible with injections. The system is in phase III trials in the United States, Europe and Latin America.

“I have been fortunate in creating a number of successful medical product enterprises,” Mann concluded. “What I try to do is to identify an underserved market, to perform robust due diligence to assure a likelihood of success and only then to create a diverse development and support team with adequate resources.”