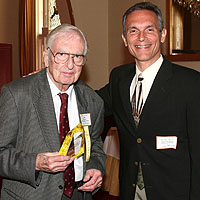 USC’s Half Century Club honored professor emeritus Herb Farmer ’42 with its Most Active Alumni Award at the club’s luncheon for the class of 1957 during Trojan Parents’ Weekend.

As caretakers of USC history and tradition, Half Century Trojans are uniquely positioned to promote the Trojan spirit and strengthen the bonds that connect USC alumni across generations. The Alumni Association invites the distinguished group into the Half Century Club beginning with its 50th class reunion.

“In the running world, there are marathoners and there are ultra-marathoners � those who run distances of 100 miles or more,” said Associate Dean Michael Renov to the gathered guests, which included Provost C. L. Max Nikias and members of Farmer’s family. “Herb Farmer is the School of Cinematic Arts’ ultra-marathoner.”

Before presenting the former professor of film technology and distribution with his award, Renov touched upon Farmer’s extensive equipment archives, which people will see as part of the rotating collections in a public space adjacent to the new cinematic arts complex.

“I’ve been on campus since I came to USC as a freshman in 1938, and this award means a great deal to me,” said Farmer, who has marveled at the changes he’s seen on the University Park campus over the years.

Renov added, “In many ways, Herb has been the glue that has held together the USC School of Cinematic Arts. He is our memory, the custodian of our hallowed past and the bridge to a dynamic future.”