One-third of all registered voters say jobs and the economy is their most important issue in deciding which presidential candidate to vote for, the latest USC Dornsife Daybreak Poll shows.

When asked which candidate they trust more to handle jobs and the economy, registered voters give President Donald Trump a 4 percentage-point advantage over former Vice President Joe Biden. But on uniting the country and healing racial divisions and on COVID-19 response, Biden has an advantage of 22 points and 14 points, respectively.

Voters were asked if they feel discomfort in discussing their choice of presidential candidates with family, friends, acquaintances and pollsters, an issue that was significantly associated with late deciders for Trump in the 2016 Daybreak Poll. Pollsters found very little difference in the comfort levels of Trump and Biden voters.

“In 2016, the Daybreak Poll found Trump voters to be significantly less comfortable with discussing their candidate choice than Hillary Clinton voters, particularly among acquaintances and if contacted by a telephone poll,” said Jill Darling, survey director of the Daybreak Poll. “This year, we see very little difference between Trump voters and Biden voters. The undecided voters are more reticent, but very few voters remain truly undecided.”

The national probability poll was conducted by the USC Dornsife Center for Economic and Social Research among 4,580 registered voters who are members of its Understanding America Study panel. The poll has an overall margin of sampling error of plus or minus 2 percentage points. 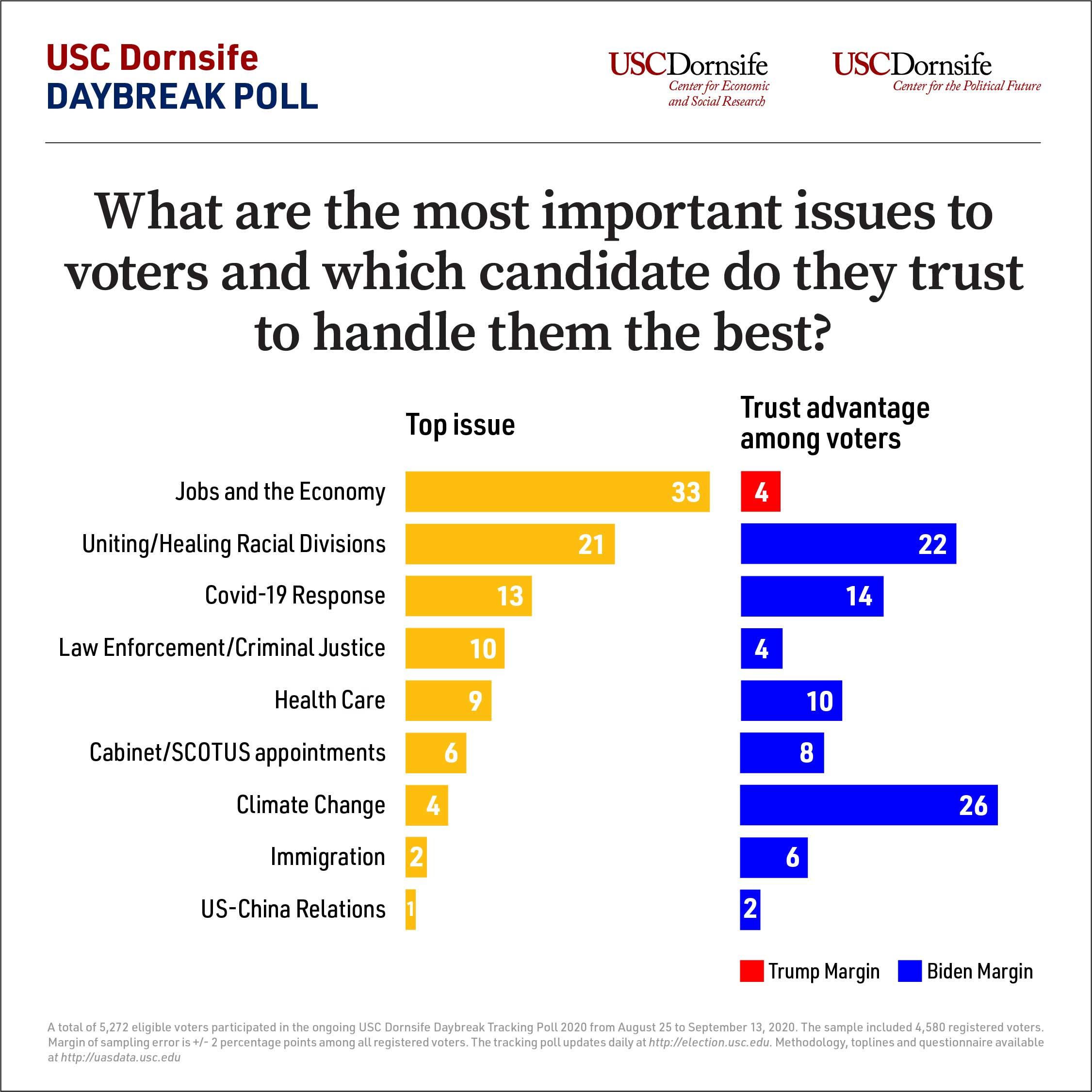 Half of Republican voters and those who say they’re voting for Trump, along with just under half the voters who lean toward voting Republican, chose jobs and the economy as their top issue.

In contrast, Democrats were more divided on their top issue. “Uniting the country and healing racial divisions” was chosen by a third of those identifying as Democrats and Biden voters, and by just under a quarter of those who lean Democrat. That issue ranked second among all registered voters, as well as among GOP leaners, independents and undecided voters.

“People are sharply divided on lines of partisanship, not only about what candidate they favor but on what issues are most important to them,” said Robert Shrum, director of the USC Dornsife Center for the Political Future.

Law enforcement and criminal justice was picked second most often by Trump voters and Republicans in general. “The Trump campaign’s focus on riots and protests as problems in the cities are resonating among Trump voters and Republicans,” Darling said. “However, potential swing voters are more concerned about uniting the country around racial unrest.”

In contrast, immigration — which dominated the 2016 presidential race headlines with Trump supporters’ chants to “build the wall” — barely registered among any category of voters as the top priority. Neither did climate change and U.S.-China relations.

People are sharply divided on lines of partisanship, not only about what candidate they favor but on what issues are most important to them.

The poll was conducted before Trump visited California, where massive wildfires have magnified the issue of climate change.

Although jobs and the economy took the top spot among all registered voters and among Republicans and Trump voters, uniting the country was the top issue for nearly 1 in 5 voters who lean Republican, and a similar percentage of independents and undecided voters.

“The poll results reveal that Biden has an issue that everybody, including Republicans, cares about: uniting and healing,” said Mike Murphy, co-director of the Center for the Political Future. “It’s a very clear roadmap for Biden. If he can make it more germane and move it further up the importance scale, that’s pure gain for him.”

It’s (not just) the economy, stupid

Pollsters also asked voters who they trusted more to deal with these issues. While voters gave Trump the edge by 4 percentage points on jobs and economy, they trusted Biden more on all of the other issues — many of them by double-digit margins.

“It’s clear that Biden owns ‘uniting and healing’ — as well as climate change — for the small percentage of people who chose that as their most important issue,” said Darling. “But he also has a 10-point advantage on health care — an issue that ranked high in importance for swing voters.”

“What’s amazing to me about this poll is Trump’s lead on the economy has steadily eroded,” said Shrum. “And the president is campaigning heavily on law enforcement and criminal justice — an issue where Biden actually has a four-point advantage.” 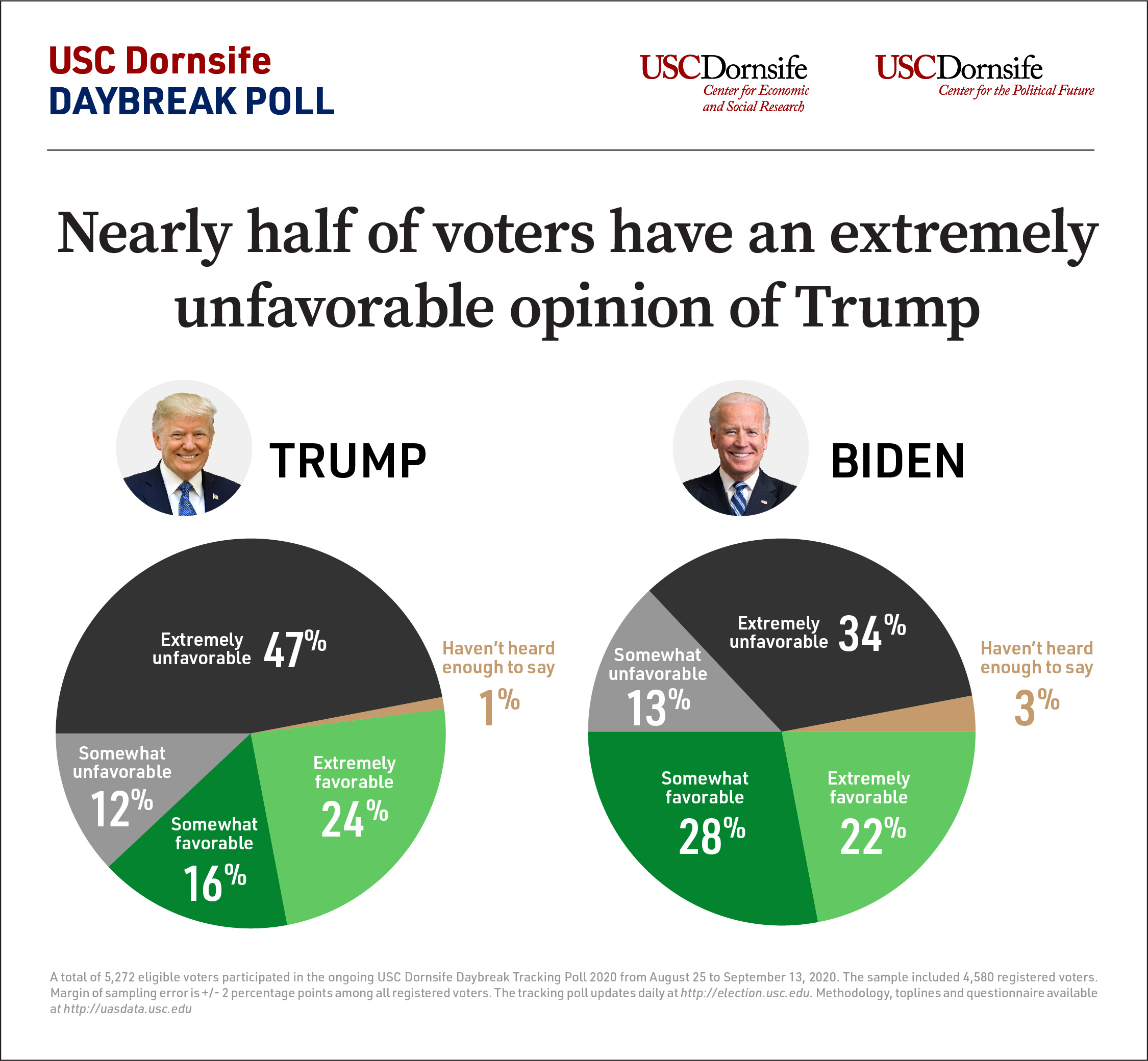 Biden has an overall favorable impression among half of the voters, while only 40% of voters have a somewhat or extremely favorable opinion of Trump.

Independents have a net negative impression of both candidates, by similar margins, but they are four times as likely to say they haven’t heard enough about Biden to form an opinion.

On a related issue, Biden voters were more likely than Trump voters to say their choice was motivated by opposition to the other candidate. Among Biden voters, 53% say they are supporting their candidate, while 47% say they are voting mainly to oppose Trump.

“Trump continues to be the unwitting get-out-the-vote machine for Democrats,” Shrum said.

A much larger majority of Trump voters are voting for him: 85% say they are supporting their candidate and only 15% are voting mainly against Biden.

USC Dornsife’s latest Daybreak Poll finds Joe Biden with a 13-point lead in the suburbs and tied with the president among white suburbanites.

This year’s version of USC’s groundbreaking Daybreak Poll will provide three ways to estimate how Americans may vote in the 2020 presidential election.

As fires rage, climate change is back on the election agenda

Will this be the year when American voters make their choice based on climate policy? USC experts examine how extreme weather and wildfires may influence the 2020 election.

USC poll: Biden leads on everything but jobs and the economy