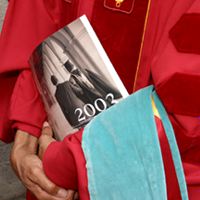 Nearly 9,000 USC students celebrated their graduation May 16 as speakers inspired them with personal tales of triumph over adversity and called on them to make their mark on the world as “proud members of the Trojan family.”

But the traditional pomp and circumstance were tempered by sobering and inspirational speeches by Valedictorian Kevin Huoh, an aspiring physician who endured more than 90 surgeries as a child, and commencement speaker Ruth J. Simmons, president of Brown University who ascended from poverty in rural Texas to become the first African-American president of an Ivy League institution.

Huoh, 22, maintained a 4.0 grade point average while pursuing a bachelor of science degree in psychobiology and a minor in art history from the USC College of Letters, Arts & Sciences. He earned academic awards, volunteered at a hospital and mastered several musical instruments.

Those achievements, while remarkable, paled in comparison with the hardships he endured as a child born with cystic hygroma – a rare condition that caused a large, benign tumor to grow in his lymphatic system. He credited USC doctors at Childrens Hospital Los Angeles with saving his life and putting him on the path to a career as a doctor.

“As I reflect on my own path, I realize that my personal experiences in large part dictate the person I am today,” he said. “These experiences also reveal a very special bond that I will forever share with USC.”

Because his tumor obstructed his airway, he told the rapt crowd, doctors said his chances of survival were slim. His desperate parents brought him to USC doctors, who gave them renewed hope, Huoh said.

Eight years and more than 90 surgeries later, Huoh had a second chance at life – an opportunity he did not squander.

“Like a good doctor, this university has helped all of us to achieve a better quality of life and given us the foundation to pursue an even better life in the years to come. While we take this moment to celebrate our four years of successes, we must remember that the future will bring great challenges.

“Never forget that you are Trojans now and forever,” he said.

Ruth Simmons, former associate dean of USC’s Graduate School who became Brown University’s president in 2000, also had high praise and words of wisdom for the graduates.

“You are all, I understand, the most illustrious graduates in the history of this great university, unmatched for your brilliance, your virtue, your daring and your devotion to USC,” Simmons said, noting that this was a homecoming for her.

“During those pivotal years [as associate dean] here, I honed skills that led me to the presidency of Brown.”

Simmons, an elegant string of pearls adorning the collar of her robe, spoke fondly of her memories at USC – particularly the pre-football game pageantry and the university’s academic excellence.

This comment prompted a rowdy cheer: “I’m still annoyed, even today, when I run into people from Stanford and UCLA – they think they’re so hot! Once a Trojan, always a Trojan.”

Simmons, who grew up in extreme poverty in segregated East Texas, spoke about how her personal insecurities were replaced by a budding recognition of her potential and an unprecedented rise through the ranks of academia.

“I often felt … deeply troubled by how little I thought I had to offer and I suspect that some of you have come to this day having serious, similar doubts,” she said.

Universities do their greatest work when they test students and teach them that their failures make them stronger, Simmons said.

“People make a lot of the fact that I’m the first African American to be president of an Ivy League university,” she said. “But I actually believe that it is nothing to be the first …. It’s far more meaningful to know whether one carries out that role in the full context of how one has been shaped as a human being.”

Crediting education as the key that opened her door to a different future, Simmons stressed the value of looking past students’ backgrounds, toward their potential.

“We can change and improve society far more effectively if we apply the elixir of education to the extraordinary wealth of human potential around the world,” she said.

Simmons described what it is like to be a black woman in the president’s office at Brown, where the portraits of bewigged white men from America’s colonial period stare down at her.

“Frankly, I have to say these men never imagined that descendants of slaves would have the potential … to lead their glorious university,” she said, noting that their presence doesn’t bother her, but affirms her belief in “the power of the future to be different from the past.”

Simmons encouraged the graduates to achieve their potential and apply the knowledge they gained at USC, though she cautioned them to keep their personal happiness in mind.

“The more important people I meet, the more distressed I am by the fact that one can rise to prominence and wealth and success and still be a miserable human being, “ she said.

“Pay attention to happiness, the happiness that stems from living openly and freely, feeling pride in who you are, loving with constancy and truth, serving others with conviction and modesty….

“May you bring out the potential in others and always, always find the best within you. Good luck and God’s speed.”

Simmons was one of four honorary degree recipients this year. They were:

� Wallis Annenberg, philanthropist, USC trustee, vice president of the Annenberg Foundation and representative of a family that has committed more than $300 million to the advancement of the university;

� Mary Ellen Avery, president of the American Association for the Advancement of Science and a pioneer in the field of neonatal medicine; and

Crow – who ascended the commencement platform dressed in an elaborate headdress of eagle feathers then traded it for a traditional mortarboard – let out an exultant cry when he received his degree.

The chief’s enthusiasm was felt by graduates and visitors alike.

David Lasky, 22, a cinema-television grad, dreamed of making it big in Hollywood from the time he was seven-years old. Raised in Brooklyn, N.Y., Lasky was a fan of both USC and movies.

“I always knew I wanted to come to USC’s School of Cinema-Television,” Lasky said. “I knew that USC was where the great filmmakers got their start, like [George] Lucas, [Robert] Zemeckis and Barbara Corday.

Lasky’s sister, Silvia Lederman, said she has had an emotional week.

“I’m overwhelmed and filled with unbelievable joy,” Lederman said. “I’m so glad David is part of the USC family. He is the first to graduate from a four-year college in our family. It’s really an accomplishment.”

Accounting grad Olanrewaju Kupoluyi, 24, and his sister Tope, 23, wore something special under their graduation robes, something that best expresses their heritage.

“These are traditional Nigerian dresses,” said Tope, who was born in Detroit but whose parents immigrated from Nigeria. “I thought it was fitting to wear them on this day because it’s all about celebration.”

“And they represent our identity and heritage,” Olanrewaju – “Lanre” for short – added.

Their mother, who wore the dresses and an African tunic, said seeing both her children graduate from USC doubles the excitement.

“I’m going to have a big party. My prayers have been answered. Now all four of my children have college degrees. That’s something to celebrate.”

Charles L. Stevenson, a 21-year-old accounting major, said the thrill of graduating was still sinking in.

Stevenson who was raised in Oakland, Calif., already has a job at the accounting firm Ernst and Young.

“My time at USC was definitely an eye-opening experience. It showed me what the world is really like. I’m so glad my parents are here. They mean everything to me.”

Vishal Kudchadkar lived in India before being accepted into the School of Engineering’s master of computer science degree program.

“I was nervous but excited about coming to America,” said Kudchadkar. Now that I’m here, I love it.

Filmmaker Sara Rashad, who earned her master’s degree from the School of Cinema-Television, is “prepared for the real world” thanks to her USC experience.

“It took a long time, but it’s all paid off,” she said. “I could not have done the work I did in Egypt without the technical training I received here.”

Egypt was where Rashad worked on her master’s thesis, an award-winning film titled “Tahara,” which means “purification” in Arabic.

“USC gave me the confidence and determination it takes to stay ahead in the film industry,” said Rashad.

Following the main ceremony, most graduates – along with their families – dispersed to the satellite ceremonies of their respective schools.