Since your appointment was announced, what has your life been like?

It’s been hectic. I’ve been wrapping up in Miami and saying goodbye to patients. And I’ve had an obligation to make that transition as smooth as possible—that’s a huge responsibility. But it’s also a very exciting time transitioning here, meeting new people and coming into a new university community. USC has been tremendously welcoming—there really is such a thing as the Trojan Family. It’s not just a catch phrase.

How is your family doing with the transition to Southern California?

My wife, Janet, moved out a week and a half after I accepted so our boys, Ben and Sam, could start school. She’s the hero because she had to leave her job at the University of Miami on short notice and come out here and set up the household while I’ve been shuttling in between. We have bought a house in Pasadena. 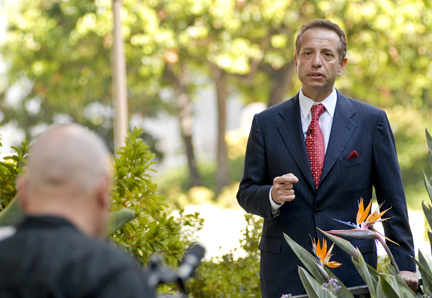 What’s the most surprising difference you’ve noticed about Southern California—compared to Miami or anywhere else you have lived?

I’ve always been an East Coaster—I’ve never worked more than two miles from the Atlantic Ocean—so California is exciting and different. It has actually always struck me as its own country in many ways. It’s enormous—most people don’t realize it has a population of 34 million—and it’s really almost an independent entity. I lived in Boston for almost 30 years and people were surprised when I moved to Miami, but I liked the excitement and the cultural diversity—and that’s a key feature of L.A. as well.

You’ve been to some Trojan football games—what did you think of them?

It was exciting. I’ve always been a sports fan, especially of baseball—I’m a Red Sox fan—and college sports. I love Trojan football and the social events surrounding it. It’s a great way to meet people, and it’s a great way to get people into the Trojan family and USC. Now that I’m here in Los Angeles, I’ll switch my national league affiliation to the Dodgers, but my American League affiliation will be the Red Sox.

You’re an expert on the U.S. Postal service. Are you a stamp collector? How did this interest evolve?

I grew up in a suburb of Buffalo, New York, and for entertainment back then we had no Internet, video games or computers. We had a black-and-white TV set with three stations, the evening newspaper and a mailbox. In that environment, a great thing to do was mail away and get stamps. I was 10 or 12 when I started, and it’s a great hobby because you learn about American history, world history and geography. My interest in stamp collecting evolved, and eventually I wrote for philatelical magazines and began collecting rare U.S. stamps.

Who was the most influential person in your youth?

My parents. Dad was an electrical engineer for Westinghouse Electric. Dad’s priorities were always science, education, the family. Mom was a housewife. I had a very conventional upbringing, but my parents’ value systems were focused on education and becoming a professional. My parents are still alive and have been married going on 60 years.

What do you consider your most important career accomplishment?

I was co-inventor of optical coherence tomography, developed with investigators from MIT and Harvard. OCT has changed in a profound way the clinical management of patients with retinal disease and that’s something I’m very proud of—it’s a great example of bench-to-bedside research.

In the administrative sense, I’ve been chair of two ophthalmology departments over 16 years and I think I left each of them better than the day I got there. One, [The New England Eye Center at Tufts University] I took from a very small place and took to the top 10. The other [Bascom Palmer Eye Institute at the University of Miami School of Medicine], I took from Number Two to Number One.

You accomplished a number of great things as head of the Bascom Palmer Eye Institute in Miami. How is that organization similar to/different from the Keck School of Medicine of USC?

Bascom Palmer is a large operation—a $130 million budget, a hospital and multiple clinics and it’s similar to the Keck School in that it focuses on medical research, teaching and patient care. The scale and diversity of issues is greater here than at Bascom Palmer, especially in terms of providing great patient care and access as well as financial viability.

What attracted you to the dean’s job at the Keck School?

The major thing that attracted me was the commitment of the administration at USC to take the Keck School to the top rank of American medical schools. It’s making a real commitment to build a USC-owned academic medical center and to expand the research enterprise and to recruit additional outstanding clinicians and scientists from throughout the U.S.

It was an opportunity to participate in leading a medical school at a very propitious time in its history. There is a real call to action at USC that’s not always the case at medical schools. I wouldn’t be interested in going to a medical school that didn’t have the interest in transformation and growth.

What are the key challenges facing you as you begin your deanship?

To provide strategic direction to the school and to provide an atmosphere of optimism about the future of the school. Also to participate in the successful resolution of the USC University Hospital matter, to recruit new clinical and basic science leaders to join those we already have, and to expand our clinical and basic science research enterprise. I’m interested in building the brand and the reputation of health care delivered by USC doctors and hospitals throughout Southern California.

What do you want the Keck community to know about you?

I look forward to meeting more of them, as well as students, residents and alumni and others.

What healthcare issues are you most passionate about?

Providing a single standard of care for rich and poor—that’s a big one.

Number two, to provide high quality, easy access to doctors. Easy to get someone on the phone, to make an appointment—making the system user-friendly and getting the clinical infrastructure to make that happen.

Is there something you have tried or done that surprises people when they hear about it?

I backpacked across the state of Massachusetts on the Appalachian Trail with my family in 2006. I hiked 100 miles with my family of four. I also ran the Boston marathon in 1999.

What are your favorite recent books?

I’d say The 900 Days : The Siege of Leningrad, by Harrison Salisbury—I like history. And, I’m a fan of Phillip Roth and I enjoyed his recent book, The Plot Against America. A Walk in the Woods, by Bill Bryson, strongly influenced our family’s decision to hike the Appalachian Trail.

What is your favorite recreational/outdoors activity?

Running. I like mid-distance running. I did three half-marathons this year and I run about three to 10 miles a day, depending on the day. One of the great things about moving to California is that it has the best running weather in the world. No snow and ice, no humidity…. And there are hills, which I like.

15 questions for Carmen Puliafito, new dean of the Keck School of Medicine