With the color and power of a fireworks show, the Trojan Marching Band and Spirit Leaders fired up freshmen Friday with an online show that conveyed the USC spirit.

While some first-year students arrive well versed in the SoCal spell-out, the lyrics to “Fight On” and movements that animate the stands, most do not. Friday’s event gave a full introduction to the spirited rituals that make every Trojan game something to remember.

“In 51 years, I’ve learned the value of the Trojan Family,” said Arthur C. Bartner, longtime director of the Trojan Marching Band. “The fight song seems to bring people together. The best part is always the student body response.”

Often called the Spirit of Troy, the Trojan Marching Band provides the soundtrack to Trojan games and events. Appearances in 13 movies have earned them the moniker “Hollywood’s Band,” along with a collaboration with Fleetwood Mac on the 1979 album Tusk that resulted in a platinum album, a first for a collegiate marching band.

Two new songs were performed for Friday’s event. In a live online poll, “Rockstar” by Da Baby featuring Roddy Ricch was named the winner. It now enters the repertoire.

The fight song seems to bring people together. The best part is always the student body response.

A demonstration of the band’s participatory choreography, a performance by the USC Song Girls and pep talks from three USC head coaches filled out the program. Traveler also made an appearance.

You may have wondered why band members and fans kick the bases of three flagpoles on their way to the Los Angeles Memorial Coliseum for luck. Bartner himself isn’t sure.

“Nobody understands how it happened,” he said. “Through the years, this developed into one of the great traditions in college football. The other one that is really covered by every network that picks up our games is the stabbing of the field with a sword by our drum major.”

Adjusting to the sound of 2020 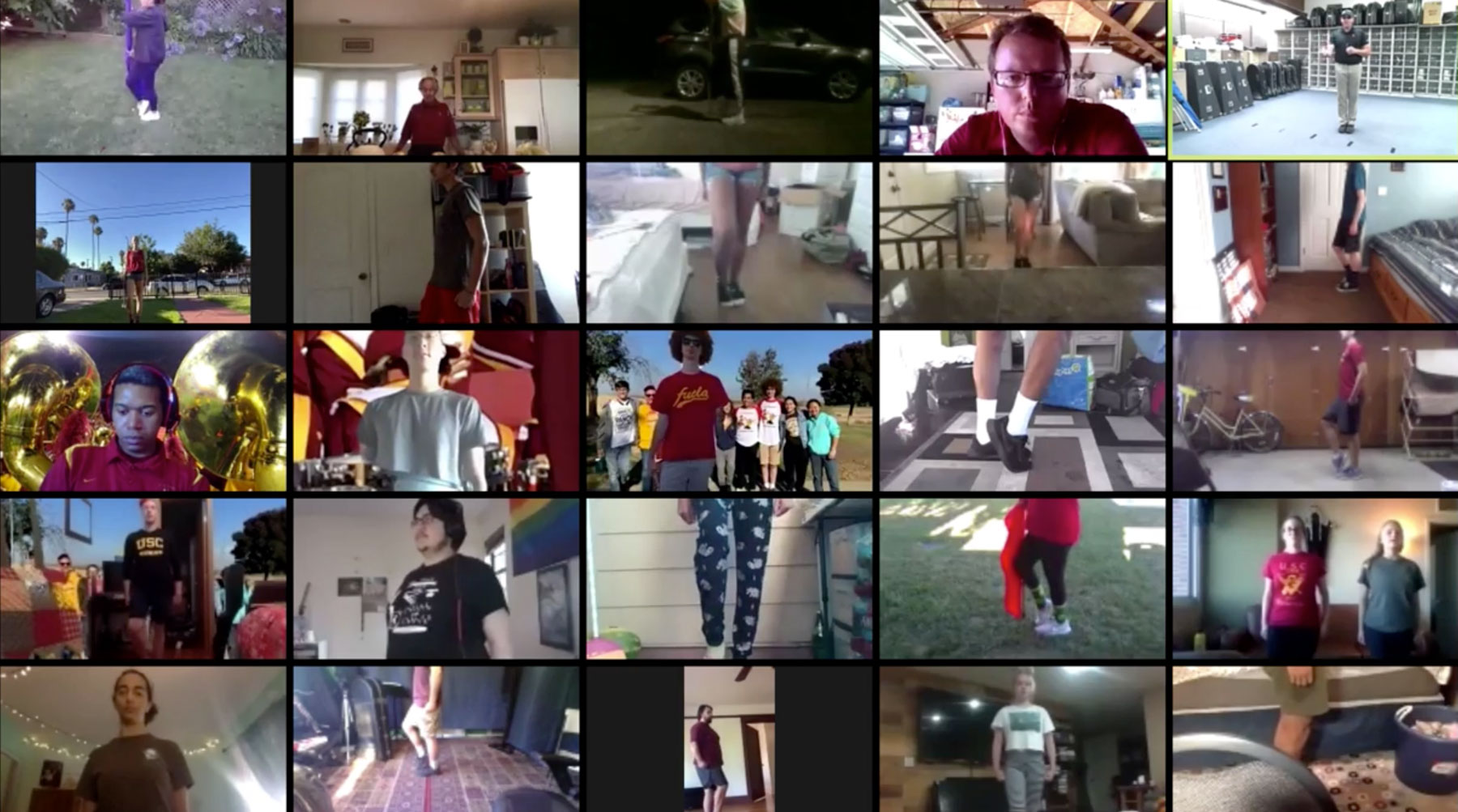 Like every student, staff and faculty member, the band has adjusted to an off-campus existence. This year’s band camp was held online for more than 250 musicians after a colossal effort to get instruments into the hands of every band member. Internet lag and time zones across the globe added more challenges.

“We have students in Hawaii, the East Coast, then we’ve got students on the African continent and East Asia,” Associate Director Jacob Vogel said in a recent interview with ABC News Los Angeles affiliate KABC-TV.

Like all Trojans, the band is looking forward to reuniting in person with precautions in place. That includes a bag that goes over instruments.

“Any of the aerosols that are coming out of the keyholes or the bell are going to be absorbed,” Vogel said. “It’s like a face mask for your instrument.”

The one-of-a-kind 2020 season has created a new tradition of sorts: a 25-tile Zoom performance of university anthems. In that format, “Conquest” provided the finale for Friday’s event.

“We have a stand tune for every situation, and good things happen when we play,” Bartner said. “We always seem to get the ball back.”

A quartet of new Trojans discuss how they overcame personal challenges and found themselves heading to USC.

Students and parents take trips across L.A. from the comfort of home

Thanks to Zoom, you can now learn all about Los Angeles on the USC Office of Orientation Programs’ Facebook page.

Kicking off this week, the schedule — with everything from ceremonies and seminars to concerts and a spirit rally — continues well into September. Check out the events, because you won’t want to miss out.