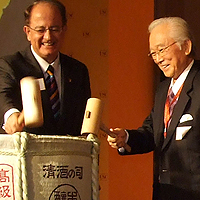 Provost C. L. Max Nikias and USC trustee Toshiaki Ogasawara use mallets to break open a sake barrel as part of a ceremony to kick off the conference in Tokyo. Photo/Courtesy of USC Tokyo Office

The USC Global Conference held in Tokyo Oct. 25-27 turned out to be one of the larger gatherings of USC alumni, friends and faculty outside of the United States. With early expectations of 400 attendees from the U.S., Europe and Asia, organizers scrambled to accommodate more than 500 registrants.

“We were pleasantly surprised by the attendance level, which was higher than we had projected and higher than previous conferences,” said Adam Clayton Powell III, USC vice provost for globalization. “We may be observing a cumulative effect of all the USC Asia conferences, as the university’s reputation and network of alumni, family and friends continues to grow and strengthen. For example, there were several senior executives and researchers who registered who themselves could have been speakers.”

Bookending the two-day conference were dinner events showcasing the diversity and global efforts of the university.

“USC is the first institution out of my hometown that I was able to learn from,” said Valentine in a pre-dinner press conference. “USC has taken a leadership role in trying to build and develop the bridges for interaction around the world.”

Pointing to Major League Baseball’s World Series under way at the same time, Valentine noted that three players with the Boston Red Sox and Colorado Rockies were Japanese. “Baseball is a world game, just as this USC Global Conference is trying to promote global business communications.”

USC trustees also were an important element at the conference, which included participation by Toshiaki Ogasawara of Japan, Yang-Ho Cho of Korea, Ronnie Chan of Hong Kong and Michele Dedeaux Engemann, the current president of the USC Alumni Association board of governors.

Over the next two days, sessions routinely were filled with attendees sitting in on sessions about China and its role in the Pacific Rim, aging in Japan and the future of digital entertainment, among other topics.

Anchoring the sessions were four speakers led by Jim Clifton, CEO of the Gallup Organization, who looked at growing opportunities in Asia. Joichi Ito, chairman of Creative Commons and fellow at the USC Annenberg Center for Communication, spoke of new computer and mobile phone technologies while Prudential Insurance co-president Timothy Feige reviewed Asia’s changing demographics and Julian Lai-Hung, executive director of digital distribution at Warner Entertainment in Japan gave an overview of the movie industry in the region.

Many attendees were first-time global conference participants, such as Jan Yanehiro, a Trojan parent.

“I think this is fabulous,” said Yanehiro, a television news reporter who co-anchored one of the first news magazine shows in 1975. “I really believe in the global issue, that we have to understand our neighbors … but what surprised me was how much I, an outsider, got to learn, and that was the real joy. I wanted to know about baby boomers � I’m a perfect baby-boomer. I wanted to learn about the female workforce because it was my generation that said ‘we’re going to change the world’.”

“With two years to prepare, we look forward to working closely with the thousands of USC alumni in Taiwan and with our many partners and friends in the region to make the USC Global Conference 2009 an even bigger success,” Powell said. “And the USC International Office in Taipei is already gearing up to address long-range logistical issues. But Tokyo has set a high standard for us to try to match!”

And while the glow of the Tokyo conference slowly began to fade in the land of the rising sun, many already were looking ahead to the many global possibilities presented at this year’s meeting.

The university’s biennial leadership event focused on ‘Innovations for a Rapidly Changing World.’

Hundreds of USC alumni and leaders gathered at the official welcome reception and dinner of the 2013 USC Global Conference in Seoul.

The 2011 USC Global Conference opened with a lion’s roar as USC president C. L. Max Nikias and Hong Kong finance secretary John Tsang inaugurated the event with a ceremonial “waking” of a lion in a traditional Chinese dance.