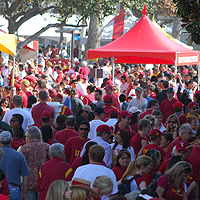 Nearly 70,000 Trojans descended upon the University Park campus to celebrate the annual event.

Homecoming 2007, billed as the biggest Trojan Family reunion of the year, brought approximately 70,000 Trojans back to the University Park campus � and turned Trousdale Parkway, Alumni Park and Hahn Plaza into a sea of cardinal and gold.

The Nov. 3 celebration, presented by the USC Alumni Association, was held in conjunction with the USC vs. Oregon State football game.

Amid the hullabaloo, USC President Steven B. Sample and his wife Kathryn made the traditional “President’s Walk” around campus, beginning with lunch and photographs at the Widney Alumni House. President Sample visited the tents of the various multicultural alumni associations while Mrs. Sample called on the alumnae (women’s) groups selling their wares at the Gold Marketplace alongside the Student Union building.

Afterward, the Samples celebrated Homecoming at the president’s tailgate party in front of Doheny Memorial Library.

Homecoming has been a Trojan tradition since 1924 when the USC Alumni Association first hosted the event. It once featured lavish floats, parades, costumes and Homecoming queens but has now evolved into a less formal occasion dominated by pep rallies, tailgate picnics and class reunions. The Alumni Association’s tent, set upon a red carpet at the feet of Tommy Trojan, featured photo ops with the iconic statue, face-painting for the children and plenty of football-related giveaways.

To cap the day off, the Trojans defeated the Oregon State Beavers 24-3 before a sellout crowd at the L.A. Memorial Coliseum.