As news of the impending pandemic grew louder in early March, mother of three Anabel Cantero stayed fully focused on her work as an assistant nurse manager at USC Norris Cancer Hospital. Then the safer-at-home orders were issued and schools were closed. Like other working parents nationwide, Cantero found her professional and family life turned upside down.

“It caused havoc,” she said. “We didn’t know what we were dealing with. We wanted to protect patients, who are already immunocompromised, and we have to take care of our staff because otherwise there’s no one to take care of the patients.”

With the strength that comes from 20 years of experience near the front lines of patient care, Cantero faced the new reality without flinching. Some patients were transferred. Surgeries, except for those deemed emergencies, stopped. Her workdays lasted until midnight and restarted with an 8:30 a.m. meeting. At home, as schools went dark, dining rooms became classrooms.

“I’m not a teacher; I’m a nurse,” Cantero said. “My son was struggling with pre-algebra. My 7-year-old was behind on reading. I helped as much as I could, but teachers have certain tools they use if a student is having difficulties. In a way, I felt they were being robbed of part of their education.”

For USC health care workers with kids, help was on the way 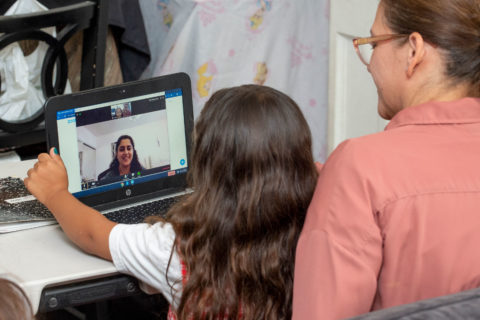 In April, Keck Medicine of USC and USC launched a comprehensive program to ease job and life stress for health care workers fighting on the front lines of the pandemic. The Care for the Caregiver program included access to therapists, meals, groceries and other essentials. Tutoring services were soon added to the list.

The USC Viterbi School of Engineering’s K-12 STEM Center helped get the tutoring part of the program off the ground. Between the center, the Joint Educational Project at the USC Dornsife College of Letters, Arts and Sciences, and the Keck School of Medicine of USC, 84 tutors came forward, ready to help with language arts, math, science and other subjects.

More than 150 young learners were signed up for tutoring services, and Cantero’s three kids were on the list.

“I’ve gotten help from five tutors since we started,” she said, “At first, there was homework help because the kids were still receiving assignments. When the school year ended, we transitioned.”

USC students learn how to tutor during a pandemic

“He’s ambitious,” said Desai, who works with JEP’s Young Scientists Program. “He’s not afraid to ask for help. He knows what he wants to review, and that’s helpful for me.”

Desai, who tutors remotely from her home in North Carolina, said tutoring keeps her connected to USC.

“It helps erase the distance,” she said. “There’s a time difference, so I usually work early in the morning. It starts my day with that connection. I like working with kids, and I want to be involved in the USC community.” 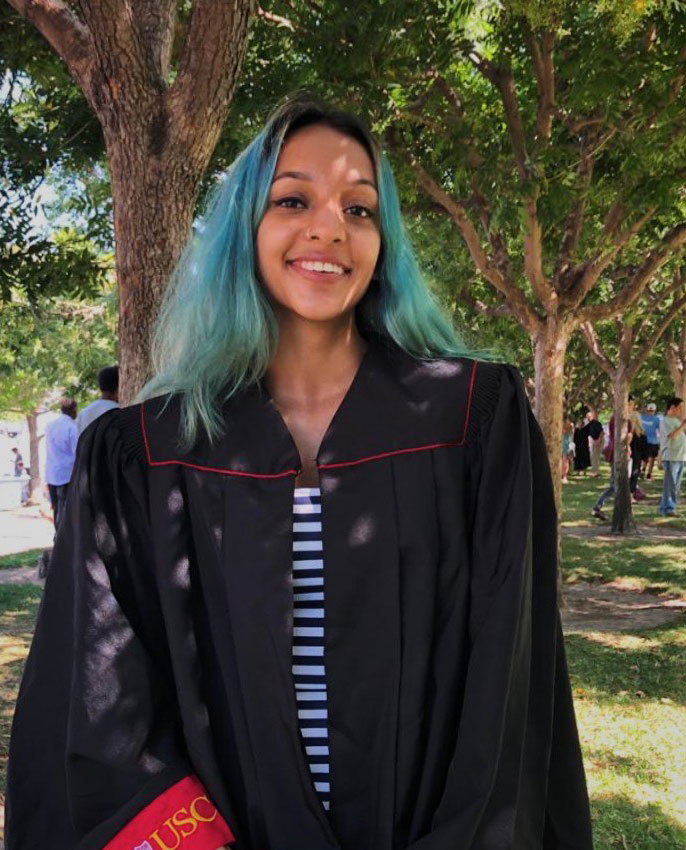 Tania Apshankar, a sophomore studying creative writing, connected with tutoring through the ReadersPLUS program, funded partly through the USC Good Neighbors Campaign. She tutors from her home in Pune, a city in western India.

“The distance can create difficulty,” she said. “Artwork and interactive projects can be tough. But you find solutions, and I’ve seen an upward curve with my two students. I can sense if there’s a distraction and re-engage.”

“I thought Tania was a teacher, she’s so good with my son,” said Lizbeth Gonzalez, a mother who lives near the University Park Campus and has two kids in the tutoring program. Her son Kevin, who attends 32nd Street School/USC Magnet, is one of Apshankar’s students.

“English is a second language for me, so English homework can be hard,” Gonzalez said. “The way Tania teaches — my son enjoys his time with her. I was thinking about summer school and he said, ‘No, I want Tania.’ He’s heading to first grade and he’ll be better prepared as a result.”

Cecilia Nguyen, a first-generation college student and rising senior studying psychology, has been tutoring with the ReadersPLUS program since her freshman year. She’s taught history, physics and astronomy, and she helped prepare neighborhood kids for college with ACT classes and guidance on their essays. The pandemic response provided her first opportunity to work with a high school student.

“I didn’t know what to expect because I’m only about five years older than he is,” Nguyen said from her home in Northern California. “You’re working on harder subjects. We were actually working on things I’m still doing now at USC. It gave me a chance to look through his lens. Since he’s older, I let him direct his assignments. After his English final, he sent me a note thanking me: short and sweet, but it spoke volumes.”

The student is the son of Jennifer Boozer, a Keck School of Medicine assistant professor who’s working at full speed helping patients adapt to telemedicine in the face of the pandemic. Though she’s never met Cecilia face to face, Boozer credits the tutor with providing critical support.

“If you get a little behind, you get a lot behind,” she said. “My son had wonderful things to say about Cecilia. She helped keep him on track, and that took a big burden off my shoulders.”

As the dwindling days of summer pass, parents are anxious about what the fall term will look like. Tutoring support for the children of Keck Medicine medical workers and families in the community will continue in one form or another, providing an element of stability.

“At first, my kids weren’t happy about schoolwork continuing through the summer, and I told them ‘There isn’t anything else we can do, so focus on this,’” Cantero said. “I want to maintain that focus. I don’t want them to lose the skills they know.”

Master of planning students at the USC Price School of Public Policy introduced 100 middle school students to the importance of urban planning as part of a collaboration with the GEAR UP program at the Robert F. Kennedy community schools.

An education can never start too early

It’s been said the early bird gets the worm. So imagine the satisfaction of local parents whose children have received the benefits of an early education through USC over the past four decades.

The popular program builds on the natural curiosity of children, ensuring they don’t fall behind in reading and writing skills.