They’ve been called one of the most junior teams to lead such a high-profile USC collaboration.

“I’m not sure if this is good or bad,” said Sook-Lei Liew of the USC Mark and Mary Stevens Neuroimaging and Informatics Institute. “We took it as a compliment,” she added, meaning Liew, her colleague Judy Pa and James M. Finley of the USC Division of Biokinesiology and Physical Therapy.

These three USC faculty members are working together to solve the unsolvable and think the unthinkable in an effort to combat the world’s most insidious and debilitating neurological diseases: Alzheimer’s disease, Parkinson’s disease and stroke.

They conduct their cutting-edge research at the USC SensoriMotor Assessment and Rehabilitation Training in Virtual Reality (SMART-VR) Center. It’s a multidisciplinary center that brings together world-class investigators across movement science, engineering, neuroscience and rehabilitation to study and develop virtual reality interventions for neuro-rehabilitation. 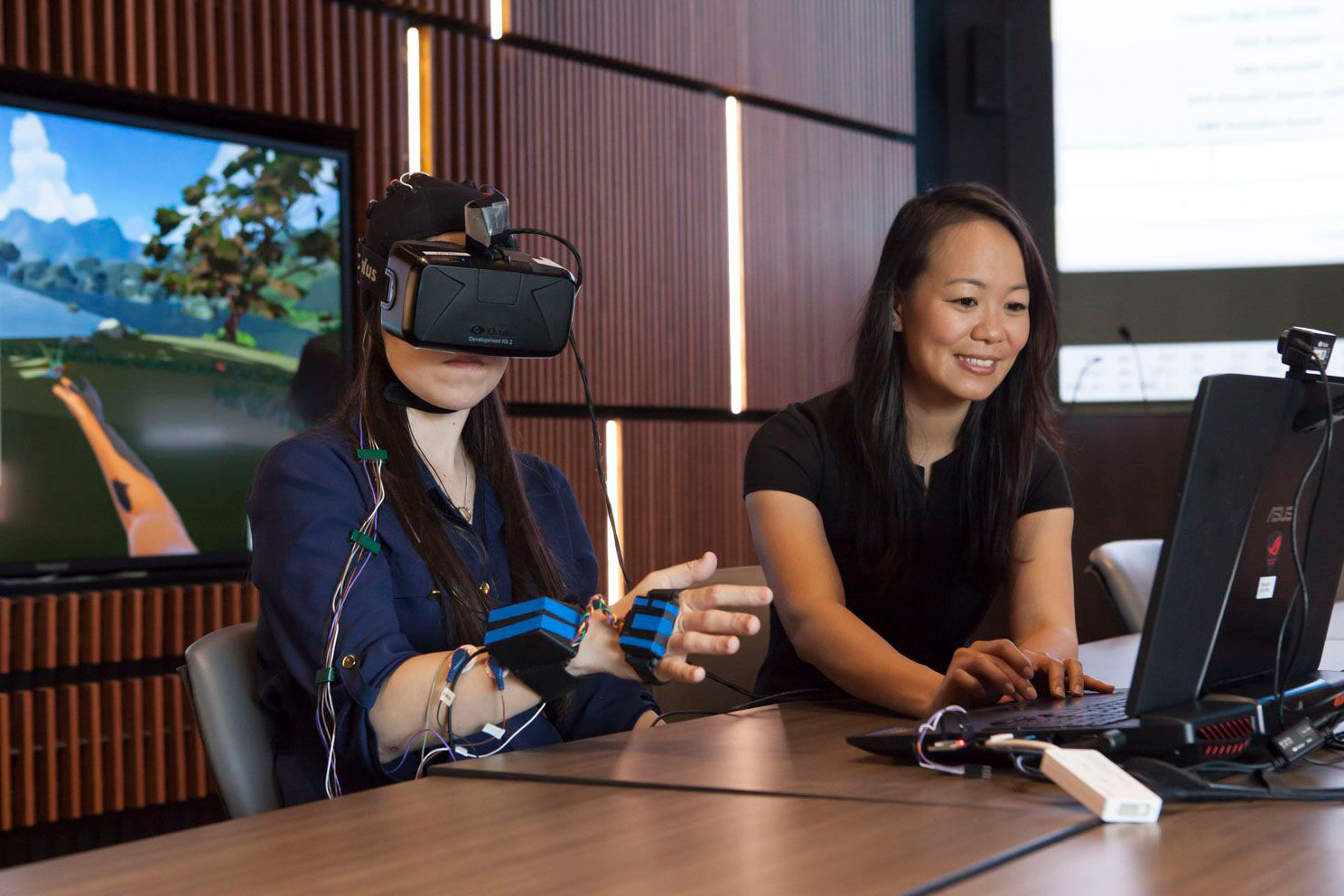 Liew, one of the center’s founders, says her research on stroke aims to personalize treatment because recovery varies greatly from person to person.

“To do this, we’ve been using big data approaches to make models of stroke recovery that account for individual differences across patients based on the individual’s demographics, like age, sex and how long it’s been since stroke,” she said. “From that information, we hope to be able to form reliable predictive models of recovery where, ultimately, you could read someone’s brain scan and get a prognosis for their likely trajectory and how they might respond to different therapies.”

Liew says the key to advancing individualized treatment is to focus her research on the development of low-cost, engaging and accessible methods for personalized therapy.

“This is where VR comes in,” she said. “We’ve developed a brain-computer interface that takes brain signals that indicate the person is trying to move, and we show them in VR a virtual avatar of themselves actually moving. We believe this type of closed-loop neurofeedback tricks the brain into thinking it’s actually moving, and seeing oneself move in VR strengthens the neural pathways that control and will eventually lead to recovered movement.”

“We can recreate challenges that people have in the real world,” he said. “The focus for us, though, is walking, and we are one of the first that I know of to be able to create a virtual environment for walking overground that’s designed to improve walking ability.” 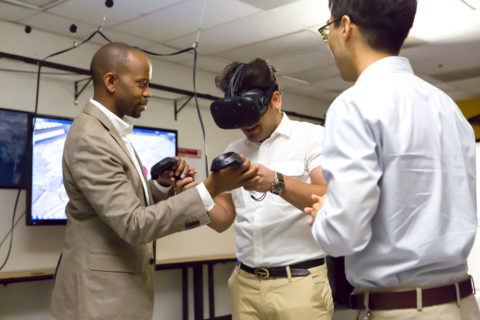 James Finley and his team test a prototype VR experience for people with Parkinson’s disease. (Photo/Courtesy of Nate Jensen)

In addition to impactful medical advancements, Finley says that the very genesis of commonly used VR is a direct result of the work conducted at USC.

“Most of the hardware — the early prototypes that gave rise to low-cost VR — was developed here,” he said. “The origin of a lot of our current consumer VR is USC.”

Also unique to USC’s advancement of VR is the center’s mission to generate new ideas that transform virtual reality into clinically impactful and evidence-based tools to improve human recovery.

Finley is convinced that many of medicine’s unsolved problems lie at the intersection of subject fields.

“People don’t know their blind spots,” he said. “Everybody is really good at what they do specifically, but they often have large blind spots when it comes to other fields of study.”

Finley says a perfect case in point was when he needed to design a virtual reality game for his Parkinson’s subjects — a skill outside of his expertise. He turned the USC School of Cinematic Arts to help him design the computer simulation.

This center is the glue that brings us all together.

“That’s a design challenge. We may know what we want, but we have no training and how to create an environment that is engaging and motivating,” Finley said. “But people in the cinematic arts think about that all the time. They’re always designing sensory experiences for people, and there’s a whole language and set of principles that go along with that.”

“Collaboration creates innovation,” he added. “This center is the glue that brings us all together. Every time we meet, it changes how we think.”

Bringing together great minds to solve common problems appears to be working. Finley recalls a Parkinson’s patient who was inactive and apathetic.

“We had him put on a virtual reality headset for a boxing game, and he was immediately absorbed and started bobbing and ducking, punching against this virtual competitor,” he said. “We had never seen him move that much.

“The exciting and surprising thing about VR is that it actually takes you outside of yourself. For someone with Parkinson’s disease, that’s key to recovery and rehabilitation — to elicit behaviors that people couldn’t normally do has impactful benefits on their quality of life, both mentally and physically.”

“By engaging and challenging spatial memory during moderate-to-vigorous intensity exercise over time, memories for newly acquired information may be stronger and longer-lasting than either physical or cognitive activity alone,” she said. “Results from this work will provide new evidence for the benefits of a novel combined VR intervention that target physical and cognitive health, simultaneously.” 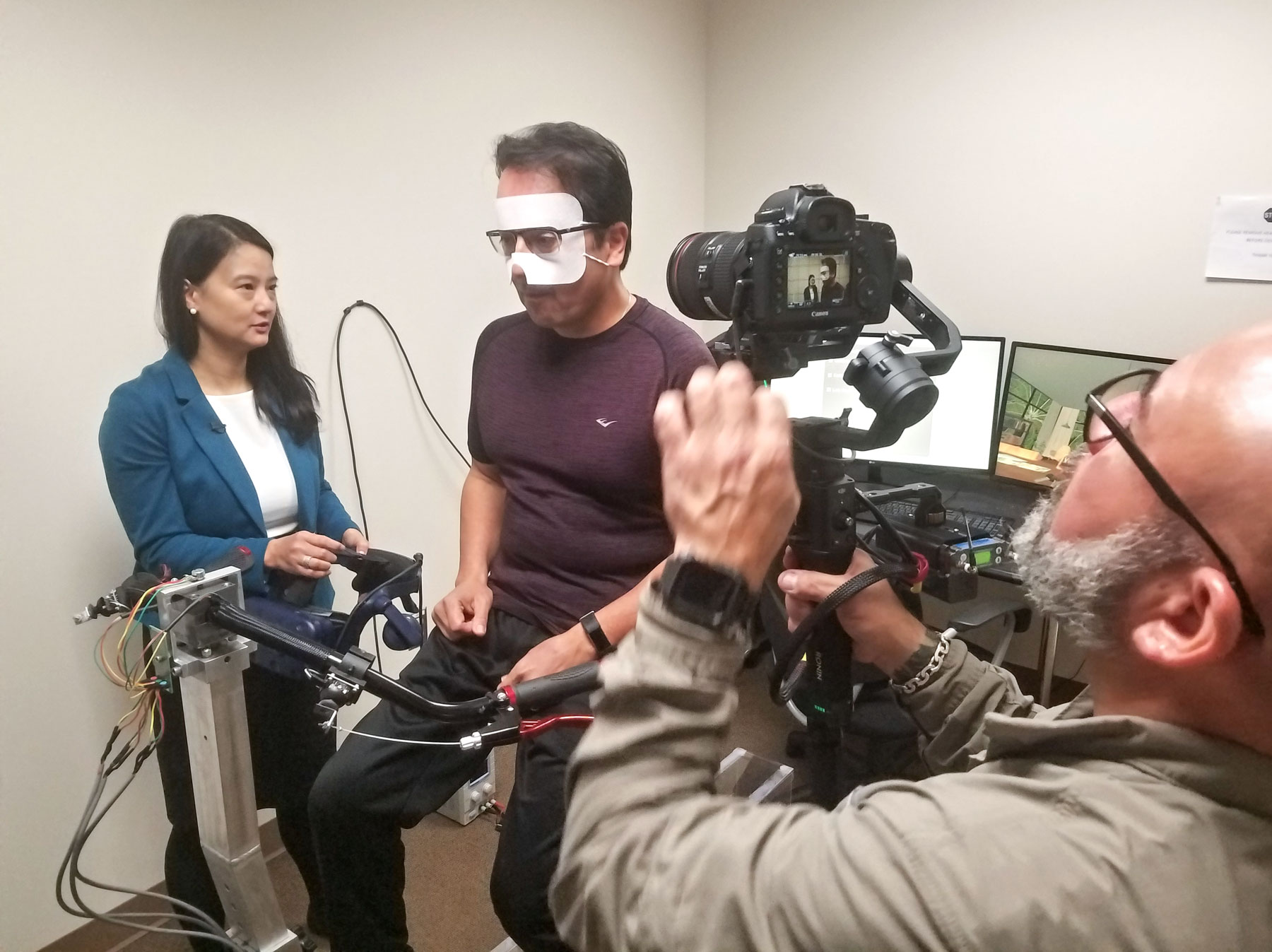 While a large body of literature has found that exercise enhances cognition, very few studies have coupled physical and cognitive activity in a VR environment simultaneously, as is the case inside the SMART-VR Center.

Alzheimer’s disease is the most common cause of cognitive impairment in older adults and affects 36 million people worldwide. Pa aims to decrease those numbers through her research on the disease.

“My research program and the talented members in my lab cut across disciplines in neurology, neuroscience, gerontology, biomedical engineering and psychology,” she said. “By engaging students and colleagues with diverse backgrounds, we are able to embrace innovation and creativity across data types and data analytics where brain meets cognition meets VR meets genetics.”

The National Institutes of Health recently awarded Pa a new VR clinical trial grant: a five-year award worth $7 million from National Institute in Aging. The focus is to investigate the effects of a VR-based brain and body intervention on cognition and brain health in older adults.

The virtual reality research at their center is the subject of great interest and widespread enthusiasm. Liew says in the past five years, the number of researchers using VR in their studies has grown exponentially.

“The USC SMART-VR Center breaks us out of our individual silos and brings together USC researchers from so many different disciplines to talk about how we’re using VR to improve health,” she said. “I’m enthusiastic that these bonds between individuals that might otherwise not have been formed, and that will help make USC a leader in the rigorous and evidence-based use of virtual reality to understand the human brain and to improve the human condition.”

The USC SMART-VR Center is funded by a USC Collaboration Fund grant. To date, the research dollars brought into USC from the combined VR applications by Liew, Finley and Pa total about $8 million.

Sook-Lei Liew builds a prototype with a laptop, an off-the-shelf VR rig, a $9 swim cap and a brain-computer interface system.

A game like no other: Healing Spaces targets Alzheimer’s, dementia patients

The game — alum Gabriela Gomes’ MFA thesis project — is a multisensory experience created to help adults suffering from neurodegenerative diseases to relax and connect with their caregiver.

Doctors rethink how to treat seniors with innovative approaches for evaluating health and fitness.