Osvaldo Cabrales starts his Yale education this fall. As the salutatorian of his graduating class at James A. Garfield High School in East Los Angeles and first in his family to attend college, he’s leading the way for his four younger siblings.

“Yale is paying for most of it,” he said. “If you’re low income and high achieving, private universities really want you there. A school like that could cost $70,000 a year, and they might give you $65,000. On top of financial aid, I received two scholarships for housing and expenses, including two round trips home each year.”

Students like Cabrales — motivated, highly accomplished and economically disadvantaged— have traditionally been underrepresented at top-tier colleges and universities. USC Bovard Scholars is a college preparatory program that helped Cabrales get to Yale, empowering outstanding students with financial needs to dream big.

If you’re low income and high achieving, private universities really want you there.

Administered by USC Bovard College, the rigorous initiative includes individual academic and admissions coaching, personalized test preparation and guidance with financial aid, scholarships, career exploration and leadership development. The yearlong program normally begins with a three-week summer intensive on the USC campus that is designed to make scholars feel at home, though that part of the program is online this year due to the pandemic. There is no cost for participants.

“We designed Bovard Scholars not just to help low-income students get into top-tier schools but to help them thrive once they are there,” said Anthony Bailey, founding dean of USC Bovard College and its signature program. “That includes giving them exposure to professionals and experts in their fields and connecting their academic pursuits to future careers.

“Whether they choose USC or another elite school, they are well-prepared to embrace the opportunities that will come their way.”

Now in its fourth year, Bovard Scholars has achieved remarkable success in addressing undermatching: the tendency of well-qualified, economically disadvantaged high school seniors to shy away from competitive college and university applications and gravitate toward less expensive, less selective options closer to home. 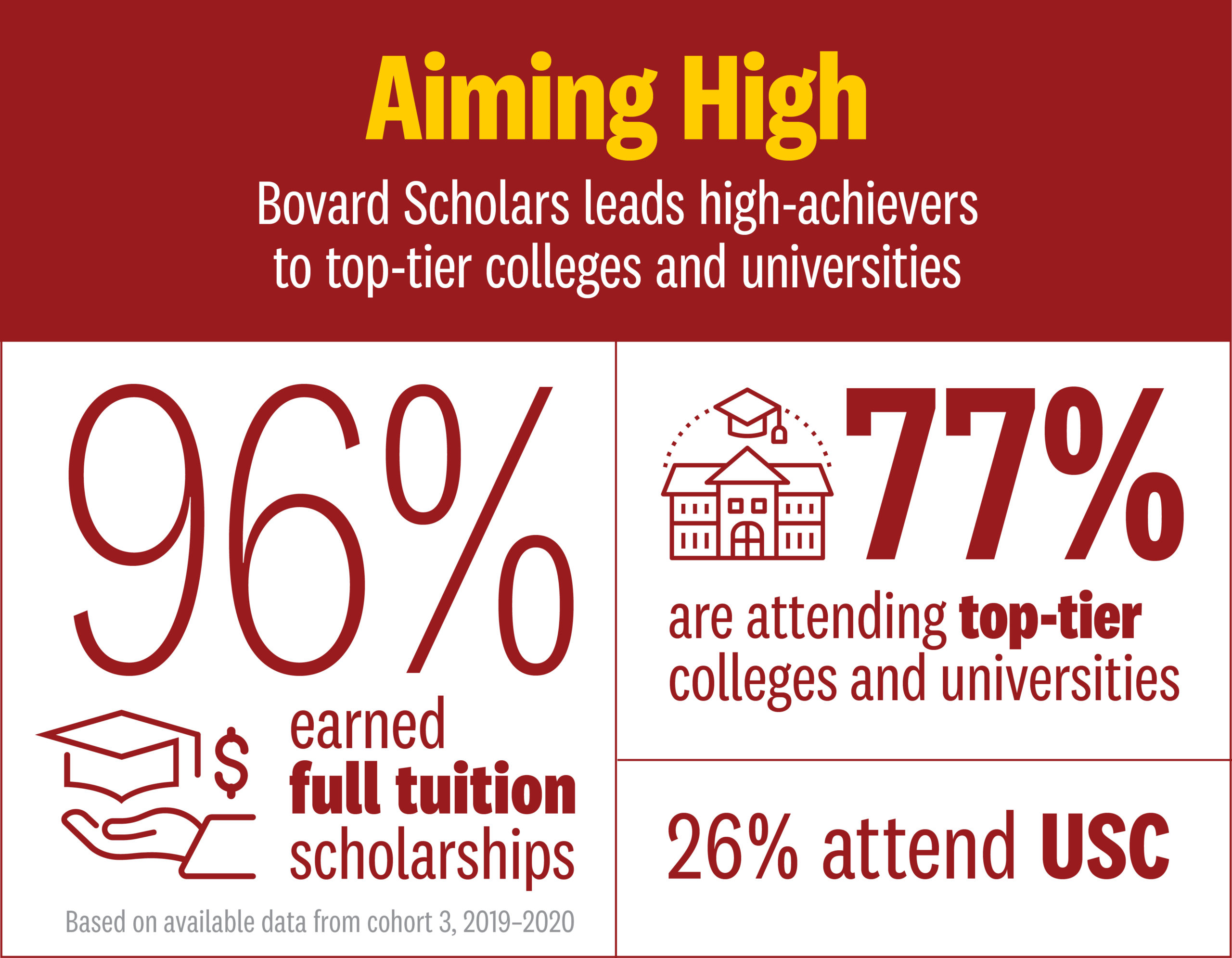 Some attend high schools where graduation rates are low, with relatively few of the graduates applying to college. Black and Latino students are impacted most, and students who undermatch are less likely to graduate college in four years. Unfamiliarity with higher education, the admissions process and the belief that highly selective universities are unaffordable are all contributing factors.

“Our college access program is unique in that we have full access and leverage of all that USC has to offer, yet we’re helping students find, apply and attend competitive colleges and universities across the country that are a fit for them, not just USC,” said Jennifer Colin, executive director of Bovard Scholars and summer programs. “We fully leverage the university’s resources to connect, inspire and support our scholars’ current and future selves.”

The program starts by helping scholars feel at ease with college, then follows through with a full year of admissions coaching.

“The admissions coaches are hired from around the country,” Colin said. “They lead a small group of 10 who bond as a peer group for a year. Those coaches work one-on-one with each of them on all aspects of their college choices, applications, essays and financial aid documents.”

Since Bovard Scholars began in 2017, it has helped almost 400 enter highly selective colleges and universities, such as Cornell, Dartmouth, Oberlin, Baylor and Columbia universities.

“Scholars see themselves and their academically talented peers at competitive schools and know they belong,” Colin said.

Former Bovard grads share how they landed on top

Over 80% of Bovard Scholars are first-generation college students. Paola Ruiz, who comes from Whittier, Calif., is first in her family to attend college. A rising sophomore at Stanford University, she originally set her sights on community college or a state school. After Bovard Scholars, she applied to USC, Stanford and four University of California schools. She was accepted at all six and is attending Stanford on no-loan scholarships and financial aid in tandem with Betsayda Puerta, a fellow student from her 2018 cohort. 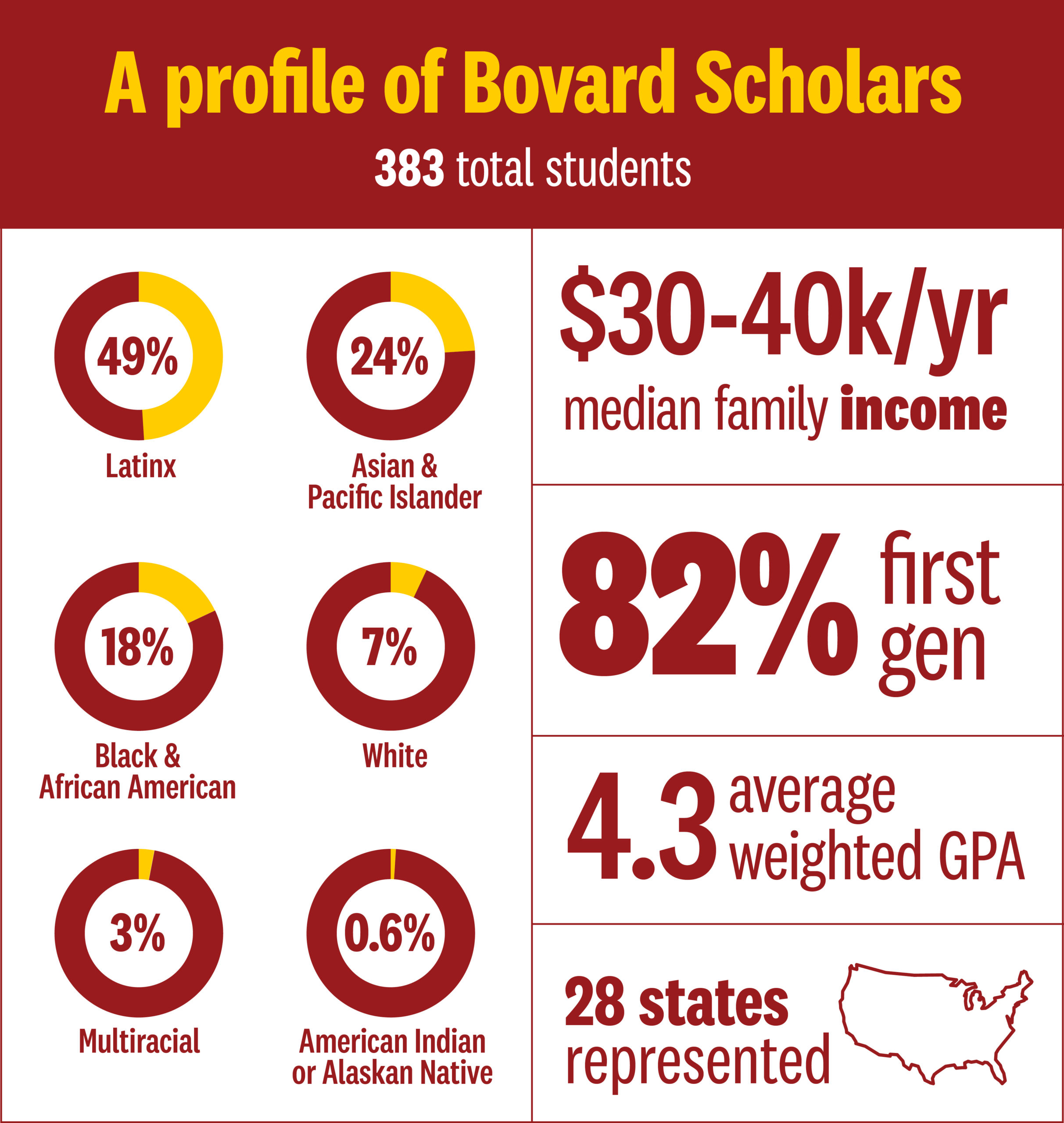 “Whenever I speak to younger friends who ask for advice, I tell them ‘Don’t think of any school as beyond your reach,’” Ruiz said. “I didn’t think I was fit for or would get into a top-tier school. At Bovard Scholars, I was part of a community with others from similar backgrounds. That made the whole idea of college a lot less scary.”

Sabrina Pierre was part of Bovard Scholars’ first cohort in 2017. The rising USC junior from Sierra Vista, Ariz., is still involved, staying in touch with fellow Bovard alumni and helping those from recent cohorts connect at USC.

“I think about undermatching almost every day,” she said. “For students like me, our parents have so much to do and our schools are under-resourced. Top-tier universities aren’t on their radar. We can’t afford summer sessions and private college counseling. When you’re not getting the help you need, you’re on your own, and most people don’t know what to do.”

Though Bovard Scholars come from all over the country, many are from the neighborhoods around USC. Kevin Gomez, who grew up in Boyle Heights and graduated as valedictorian of L.A.’s Roosevelt High School, will become a Trojan this fall.

Though his immigrant parents are unfamiliar with the U.S. college admission process, Kevin was mentored by an older sister who attends the University of California, Berkeley. She helped him find the program.

“Bovard Scholars helped me become more independent,” he said. “It was great to see other students from similar backgrounds from around the nation. I built connections for life.”

Cabrales is counting on those connections to carry him forward during his time at Yale. Though he holds family close, he’s ready to carry out a lifelong ambition to pursue higher ed with a top university far from home.

“From the start of high school, I told my friends I was going out of state,” he said. “I’ve been in East L.A. all my life, and a big part of me wanted to expand my horizons. It’s important.”

USC Bovard Scholar shares her success: ‘If I can do it … you can do it’

A one-of-a-kind program at USC offers year-round support to ensure that high school seniors succeed at applying to and attending top-tier universities.

How USC helps high-achieving, low-income students get into top universities