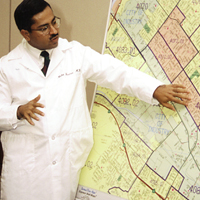 In a study of more than 6,000 Los Angeles-area children � the largest study of its kind � researchers at the Keck School of Medicine of USC found that both strabismus (commonly known as cross-eyed or wall-eyed) and amblyopia (often referred to as lazy eye) were more prevalent in older children than in younger children.

The study is currently available in the online edition of the journal Ophthalmology.

The population for this first phase of the Multi-Ethnic Pediatric Eye Disease Study was composed equally of African-American and Hispanic youngsters, ages 6 months to 6 years, who reside in Inglewood.

The overall prevalence of strabismus was 2.5 percent. While this finding remained constant regardless of gender or ethnicity, prevalence trended upward with increasing age.

The overall prevalence of amblyopia, which was 2.6 percent in both ethnic groups, similarly trended upward with age, although researchers concluded that this trending stabilizes by 3 years of age. As with strabismus, researchers found no difference when amblyopia results were stratified by gender.

“This is the first evaluation of strabismus and amblyopia in these two ethnic groups,” said principal investigator Rohit Varma, professor of ophthalmology and preventive medicine at the Keck School, and director of the Ocular Epidemiology Center at USC’s Doheny Eye Institute.

“What was most surprising about our findings was that the vast majority of children who we diagnosed with either strabismus or amblyopia had been previously undiagnosed and hadn’t received any care. Both of these disorders can be detected by age 3, so this points to a crucial need for early screening and intervention programs that could prevent lifelong visual impairments.”

Said Susan Cotter, the study’s co-principal investigator and a research professor of ophthalmology at the Keck School, “These study results fill an important gap in our knowledge base regarding the magnitude of strabismus and amblyopia in infants and young children, as well as our understanding of age-related differences in these children. The results will likely impact the development of vision screening programs and health care policy.”

This population-based, multiphased study began in January 2004. With the Inglewood portion of the study completed, USC researchers now are conducting vision screenings in Riverside County. When these screenings are completed, children in Monterey Park will be assessed. The population for the Riverside and Monterey Park screenings will be Asian American and non-Hispanic white children ages 6 months to 6 years.

All phases of the study will be completed by 2011, at which time more than 12,000 youngsters will have been screened for strabismus, amblyopia and other vision conditions, including astigmatism as well as near and farsightedness.

“This study provides new information on the development and extent of eye diseases among infants and preschool children from two major ethnic groups in the United States � African-Americans and Latinos,” said Paul A. Sieving, director of the NEI. “The study highlights the importance of early detection and treatment to reduce the burden of visual impairment on children, their families and society as a whole.”

Age a Factor in Detection of Poor Vision