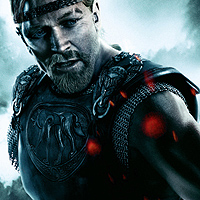 The technology in his adaptation of the adventure allowed Zemeckis to add stature to the frame of actor Ray Winstone.

Brought to the screen using performance-capture technology and opening in theatres this weekend, the film is Zemeckis’ live-action reinterpretation of the classic Old English poem about a sixth-century hero and his battles with the monster Grendel.

“The script was so different and so good, yet we could never get the project off the ground,” Zemeckis told the 400 students who packed the Norris Cinema Theatre. “I bought the script 10 years ago and when I was making The Polar Express, I thought, ‘this is how we need to make Beowulf.’ ”

When asked if he had to invent new technology for the film, Zemeckis said the project hinged on writing new computer programs. As an example, he explained a process in which EKG sensors placed on the skin adjacent to the eyes are connected to a Palm Pilot that reads the electrical signals emitted by the actors’ eye muscles.

Saying how the project “shows what the absolute extreme of the art form is,” Zemeckis referred to the digital enhancement of the film’s lead actor Ray Winstone, who had nearly eight inches added to his frame to transform him into the story’s perfectly built hero.

“I couldn’t think of whom I could cast if I were making this movie in a traditional 2-D way,” Zemeckis said, adding that Beowulf took a year and a half to complete after the actual performance capture was done in roughly 28 days. “With this technology, I was able to get the best actor with the all the power, emotion and essence required for the role.”

Recalling how different it was directing his 1988 hit Who Framed Roger Rabbit, Zemeckis said he doesn’t refer to Beowulf as animation.

“Here, I’m directing actors and with my layout team, I direct the camera,” he said. “I love this art form and I’m committed to it and want to see it stand on its own. You get the best of both worlds and have absolute control over the cinematic arts.”

He added, “I know a lot less about this process than I do about making a traditional movie. Yet, this medium also affords you the ability to use the traditional tools of filmmaking in conjunction.

“Only now, it’s just that I’m in an air-conditioned office instead of hanging off of some ridge in the middle of the night in northern Denmark.”

The Director Who Cried Beowulf