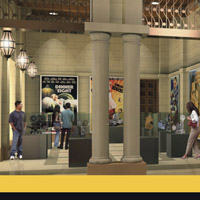 Artist’s rendering of the central exhibition space to be called the Hugh M. Hefner Exhibition Hall

Hugh Hefner, the multimedia entrepreneur and longtime supporter of USC, has donated $2 million to the USC School of Cinematic Arts.

The gift will fund the central exhibition space in the heart of the school’s new 137,000-square-foot complex as well as an archival repository that will house decades of student films, production-related records and other priceless historic resources.

“I’ve always believed that following one’s dreams is very important,” Hefner said. “I’m proud to support the USC School of Cinematic Arts, which offers dialogue and personal interaction between scholars, educators, industry veterans and the students who are pursuing their dreams to become the storytellers of the future.”

The Hefner gift represents the latest industry investment in the school, following the recordbreaking $175 million donation made by alumnus George Lucas’ Lucasfilm Foundation in October 2006. The central parts of the complex are slated to be completed in December 2008.

“Hef’s support is tremendous, not only for the immediate goal of funding the Hefner hall and archive but also for the fact that it underscores how vital this institution is to us all,” Lucas said.

The announcement also represents the latest move made over the past 15 years by Hefner to aid the school. Long a patron of film, film preservation and documentary productions, Hefner gave $100,000 in 1992 to create the critical studies course Censorship in Cinema. In 1995, he provided $1.5 million in endowment for the Hugh M. Hefner Chair for the Study of American Film, currently held by professor Richard Jewell.

“Hugh Hefner’s enduring support for the school makes a powerful statement not only about his love for film but also for his dedication to ensuring we’re successful in preparing our students to become entertainment arts leaders,” Dean Elizabeth Daley said. “This hall and archives will be a key element in that process, by shining a spotlight on the achievements of the past to inspire our men and women as they create the future.”

Located directly off the new facility’s main lobby, the Hugh M. Hefner Exhibition Hall will feature rotating installations and events that can draw from more than 5,000 major pieces in the school’s extensive collection of film, television and interactive media assets.

Among the items are the audio mixer used on the first “talkie,” The Jazz Singer; plaster face castings used to design makeup effects for MGM stars such as Clark Gable and Fred Astaire; and Academy Awards that school-produced films have won as well as Oscars, Emmys and other accolades entrusted to the repository’s care by luminaries such as Frank Sinatra and David Wolper.

The Hugh M. Hefner Moving Image Archive, which is situated in the climate-controlled vaults of the Norris Theatre Complex, houses more than eight decades of student films, including some of the earliest productions of George Lucas, Robert Zemeckis, Jon Turteltaub and hundreds of others. The Hefner gift also supports the Hefner archivist who is dedicated to managing the contents of the trove.

Hefner has had a lifelong fascination with film. In 1971, Playboy Enterprises teamed up with Roman Polanski on Macbeth, which was voted best picture of the year in 1971 by the National Board of Review of Motion Pictures.

The company went on to produce Monty Python’s first film, And Now for Something Completely Different, and The Naked Ape, with Universal Pictures. Hefner also produced many movies for television, including Third Girl From the Left, starring Kim Novak and Tony Curtis.