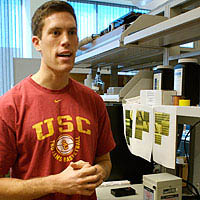 The fifth-year senior, who has never visited England, plans to pack his basketball shoes and tennis racquet for Oxford.

Doucette is one of only 32 Americans to be awarded the honor for 2008. He will join his fellow Rhodes Scholars in study at the University of Oxford in England next year, pursuing a master’s degree in engineering science.

Doucette, from Acampo, Calif., is majoring in aerospace and mechanical engineering at the USC Viterbi School of Engineering and has a minor in business at the USC Marshall School of Business. In addition, the 6’5” Doucette played small forward on the USC Trojans men’s basketball team for four years, joining the team as a walk-on.

In his studies at USC, Doucette has been a presidential scholar, achieving a grade point average of 3.97. He is currently conducting research involving chemistry, physics, engineering and biology to optimize the efficiency of solar cells.

“He’s got that team spirit and he’s intellectually gifted,” said Andrea Hodge, a USC Viterbi School assistant professor who was Doucette’s mentor at the Livermore Laboratory in the summers of 2005 and 2006. Doucette worked with Hodge on methods to improve the efficiency of catalytic converters and the effectiveness of medical implants.

“I call him Sen. Doucette because he is so incredibly focused and has such keen time-management skills,” Hodge said.

As part of his USC Marshall activities, Doucette co-founded Los Angeles Community Impact, an organization that has provided consulting services to more than 30 community projects.

“Reed excels at everything he does and has been a joy to work with,” said USC Viterbi School of Engineering Dean Yannis C. Yortsos. “We are very proud of his accomplishments in engineering and on the basketball court.”

“I’ve always had great educational ambitions and am proud to accept such a prestigious scholarship,” said the 22-year-old Doucette. “It’s a great honor to represent USC and the basketball team in particular. Playing sports is something the Rhodes Scholarship committee values, and my Trojan athletic career will serve me well at Oxford.”

Doucette, the son of Tom and Barbara Doucette, has a sister, Lauren, a junior majoring in business at USC. He said he chose USC not for athletics � “I wasn’t recruited and I had no definite way of knowing if I would make the team” � but for its blend of academics and extracurricular activities.

“I also really liked USC’s emphasis on pursuing several fields of study,” he said. “I don’t know if other schools would have been as willing to work with me on my academic goals.”

The fifth-year senior has never visited England. His first trip to Europe was last summer, on a family trip to Italy and France.

Doucette plans to pack his basketball shoes and tennis racquet in his bags for Oxford, as well as the banjo he recently acquired. Inspired by comedian Steve Martin, he’s teaching himself to play “as a fun way to relax.”

USC has done well in highly competitive scholarships in recent years. Five USC students have won Marshall Scholarships since 2000, and there have been 38 USC student Fulbright Scholars during that time, including a record of nine awarded last year.

The Rhodes Scholarships were established in 1903 by Cecil Rhodes, a British-born South African businessman, mining magnate and politician. He was the founder of the diamond company De Beers. Rhodes hoped that bringing students to study at Oxford would promote international understanding and peace. The scholarship provides two years of postgraduate study.

The California competition for a Rhodes Scholarship is considered to be one of the most difficult, due to the size of the state and the number of top universities here. California’s other Rhodes Scholar this year is Asya J. Passinsky from the University of California, Berkeley.

A complete list of this year’s Rhodes Scholars is at www.rhodes scholar.org

A list of this year’s Rhodes Scholars is at http://www.rhodesscholar.org/