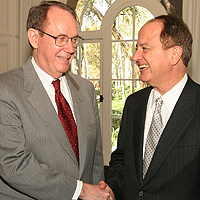 The IEEE, a professional society dedicated to the advancement of electrical and computer sciences, engineering and related disciplines, has tapped USC President Steven B. Sample and Provost C. L. Max Nikias for two of its most prestigious honors.

Sample was named winner of the 2008 IEEE Founders Medal, which recognizes outstanding contributions in the leadership, planning and administration of affairs of great value to the electrical and electronics engineering profession.

In making the award, the IEEE cited Sample’s “leadership in higher education and the engineering profession” as well as his “pioneering contributions to consumer electronics.” Not only has Sample been the driving force behind USC’s unprecedented gain in academic stature since 1991, but he also invented a digital electronic control system that has been installed behind the touch panels of more than 500 million microwave ovens and other home appliances worldwide.

“The Founders Medal represents a wonderful distinction, not just for our president, but for the entire USC community,” Nikias said. “It confers enormous prestige on USC by recognizing President Sample’s unparalleled accomplishments in steadily guiding this university to the forefront of higher education.”

Previous winners of the Founders Medal, which was established by the Institute of Radio Engineers in 1952, include USC trustee Malcolm Currie (1995) and William R. Hewlett and David Packard (co-recipients, 1973).

Nikias, a fellow of the IEEE since 1991, received the organization’s 2008 Simon Ramo Medal. First bestowed in 1982, the Ramo Medal recognizes significant achievement in systems engineering and systems science or technical leadership in a major innovative engineering project. Nikias’ citation called out his “outstanding leadership in engineering systems research and education” and his “pioneering contributions to integrated media systems for the entertainment industry.”

Upon learning about Nikias’ selection, Sample said: “This medal affirms what we at USC have known about Max Nikias for 16 years: He possesses a rare combination of intellectual prowess, visionary innovation and catalyzing leadership. Few engineers have been as productive as Max has, and fewer indeed have demonstrated his kind of path-breaking leadership that inspires people and builds academic programs that are incalculably valuable to society.”

Sponsored by Northrop Grumman, the Ramo Medal is named in honor of Simon Ramo, who helped develop both the electron microscope and the long-range guided missile but perhaps is most widely known as the “R” in TRW Inc., the aerospace corporation he co-founded.

It is particularly apt that Nikias was recognized with this medal, given Ramo’s close affiliation with USC. Ramo and his wife, Virginia ’37, were founding co-chairs of the Board of Overseers of the Keck School of Medicine of USC as well as co-recipients of the 2002 USC Presidential Medallion.