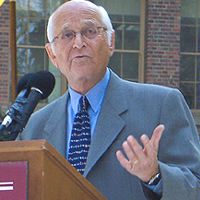 Immediately after USC’s main 120th commencement ceremony May 16, most graduates – along with friends and families – dispersed to the satellite ceremonies of their respective schools.

Buchwald might have seemed an unusual choice for the USC Department of Biokinesiology and Physical Therapy.

In fact, the humorist and USC alumnus knows the field firsthand, after suffering a stroke in 2000 that left him unconscious for 2 1/2 months.

“I had to relearn how to use kitchen utensils; how to get in and out of cars; how to use a computer,” he told the audience at Bovard Auditorium.

“I’m not trying to butter you people up, but going into your profession, you need a lot of patience.”

Buchwald’s quips, which met with applause and guffaws, included one prediction for the class of 2003: “You will inflict pain on your patients. My physical therapist tells me, ‘If you don’t feel any pain, I’m not doing my job.’ ”

But his gratitude was heartfelt as he told the graduates, “At the end of the day, you can say ‘I helped someone who needed it, and I’m glad I chose my job.’ ”

The grads may feel the same about Buchwald, whose closing rang true: “I could have given you a profound speech, but you would have forgotten it in 20 minutes.

“Instead, 20 years from now, when your children ask what you did on graduation day, you can say, ‘I laughed.’ ”

Actor René Auberjonois, who has played roles ranging from Shakespeare’s Richard III to Constable Odo on “Star Trek: Deep Space Nine,” spoke to graduates of the School of Theatre.

“If you’re asking how to become successful, I haven’t a clue. But if you’re asking about the work, do it, do it anywhere you can,” he said. “Stay in shape, keep your instrument tuned.”

Referring to Samuel Beckett’s exhortation to “try again, fail again, fail better,” Auberjonois said, “There is no doubt that you will sometimes fail, but you must never doubt your right to do so.”

Speaking at the Shrine Auditorium, Motion Pictures Academy president Frank Pierson told graduates, “Go and make cinema and TV that express our history and our ideas, and that foster respect for a civilization in real danger of self destruction.

“Be decision makers with dreams and hopes instead of raw ambition. Tell stories that illuminate our times and our souls. That waken the sleeping angel inside the beast.

“We need this from you as we need clean drinking water and roads, green parks and libraries. It is as important as the breath of democratic life,” Pierson said.

Television pioneer Norman Lear, quoting writer George Bernard Shaw, told Annenberg School for Communication grads that “true joy in life is being used for a purpose recognized by yourself as a mighty one.”

Be a ”force of nature instead of a feverish, selfish little clod of ailments and grievances complaining that the world will not devote itself to making you happy,” he said.

“…Leave this place to share, to share the self you have in abundance – your talents, time, energy, thoughts, dreams, feelings, plans, friendship and love. …Tilt at windmills, … but know that joy in life comes from sharing.”

And on May 18, Sen. Dianne Feinstein delivered a strong attack on America’s current foreign policy strategy in her address USC Law School graduates.

In the Bush administration’s pursuit of a war against Iraq, Feinstein said the administration’s “policy of unilateralism and preemption” is undermining international law, increasing our reliance on nuclear weapons and squandering the global goodwill spurred by the Sept. 11 attacks.

“In the long run, I deeply believe that this new strategy undermines U.S. security and may well make the world more dangerous, not safer,” said Feinstein, a member of the Senate Select Committee on Intelligence.

She also said the administration was developing a new policy on the first-use of nuclear weapons that includes the possibility of preemptively attacking a non-nuclear nation with nuclear weapons.

Calling her remarks “a sober address for a bright, young law school class,” Feinstein said, “this great nation needs your guidance and your participation … the voice of reason and restraint can still prevail.”