Almost two months after the first Skid Row arts packages were organized, USC Arts in Action and the Skid Row Arts Alliance are ready to build upon the success of their first effort and begin distributing the second round.

Though improvements have been made, USC Arts in Action Lead Producer William Warrener said the core content of the packages has remained roughly the same: pens, colored pencils, sketchbooks and a zine with activities and information. Perhaps more importantly, the mission behind the packages has stuck as well. In a time of uncertainty and isolation, art can be a lifeline for Skid Row residents.

“It’s a lesson in how art and design can contribute to public health and community building, especially in a year of a pandemic,” Warrener said.

In mid-April, students from the USC Roski School of Art and Design and a group of arts organizations around Skid Row started putting the 170 packages together. The packages consisted of sketchbooks, pen and pencil kits, fabric bags, in-ear headphones, hand-sewn masks and a zine designed by USC Roski students that contained offerings from several prominent organizations in Skid Row. Though assembling that many materials seems difficult, Clancey Cornell said the challenge was actually in the physical distribution.

Warrener said this time that number would be around 120, after the first round saw leftover packages.

Cornell, the archival projects manager at the Los Angeles Poverty Department — a Skid Row arts and performance group that curates the Skid Row History Museum & Archive — said that despite starting to distribute the packages in late April, it took until June to finish handing them all out due to the variety of residents’ locations. During the first round of distribution, the group realized that a portion of the artists no longer lived in the community, which contributed to the excess packages, Cornell said. 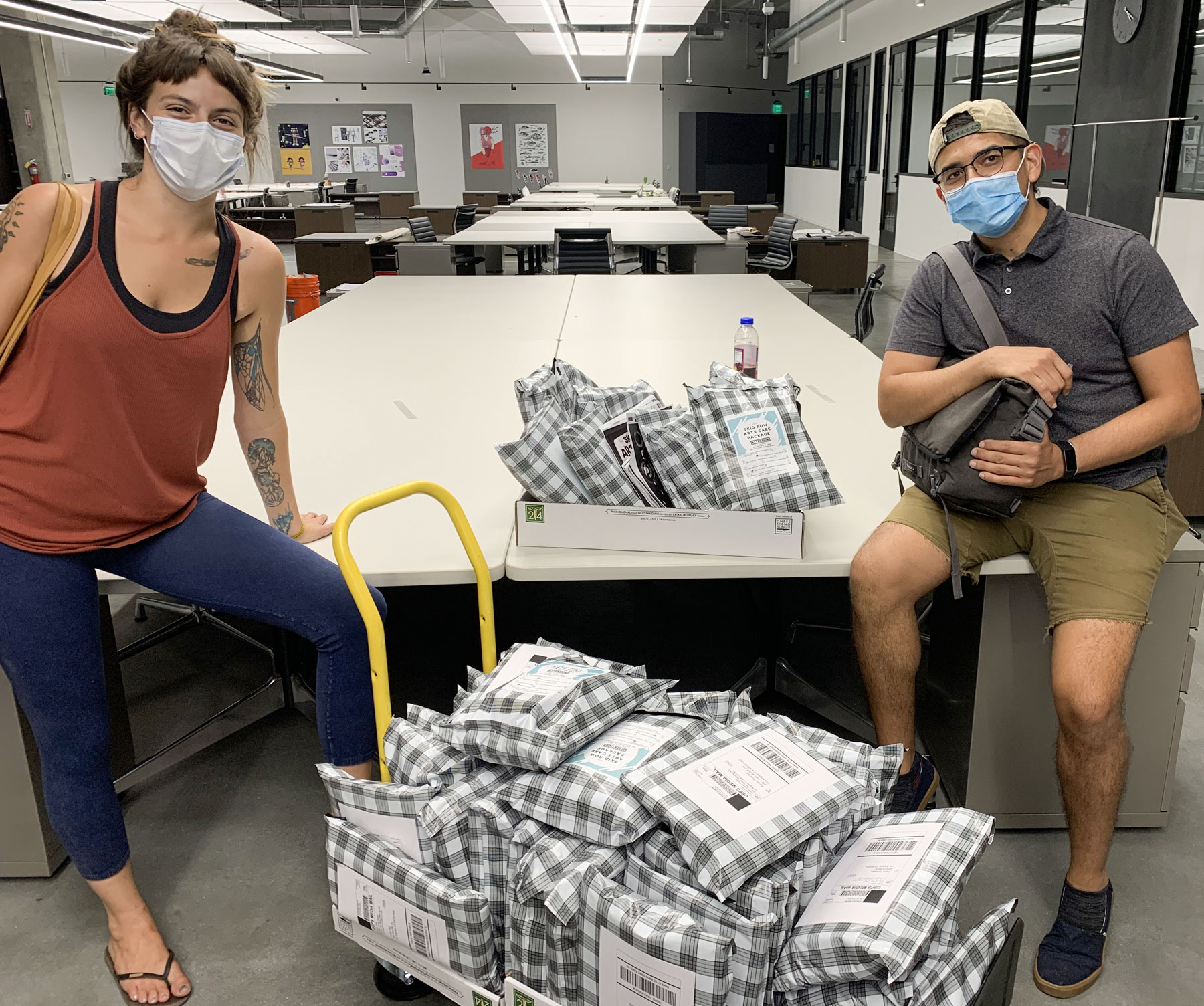 “It took a lot longer than expected, but we have some awesome volunteers who are really committed to making sure the packages make it to the artists,” she said.

Cornell added that she anticipates the second distribution will go much smoother and only take around two weeks.

As far as the actual content of the packages, Cornell said the main feature is the expanded Skid Row Arts zine with maps of COVID testing sites, port-a-potties and hand-washing stations, as well as a schedule of arts programming still offered during this time and activities artists can do where they are.

She said this round also includes a range of high-quality art supplies like acrylics, watercolors, fabric pens, colored pencils and mini canvases, as well as sketchbooks donated in bulk by Art Supply Warehouse in Westminster, Calif. The team has also included collections of donated PPE masks and totes from the larger L.A. community.

“It’s all on us to make sure that everyone who receives the packages knows exactly what they’re getting, how cool it is and what’s really in it,” Cornell said, “as opposed to just, ‘oh here’s a bunch of supplies.’”

Leeav Sofer is the artistic director and co-founder of the Urban Voices Project, an organization that uses music to create a supportive community space for vulnerable individuals. As someone who has worked closely with the Skid Row community and this particular project, he also shared excitement for this next round of packages, particularly the high-quality art materials and sketchbooks.

Many of the residents and program participants that Sofer sees don’t have access to top-quality tech. Devices that a majority of people take for granted are not always widely available. 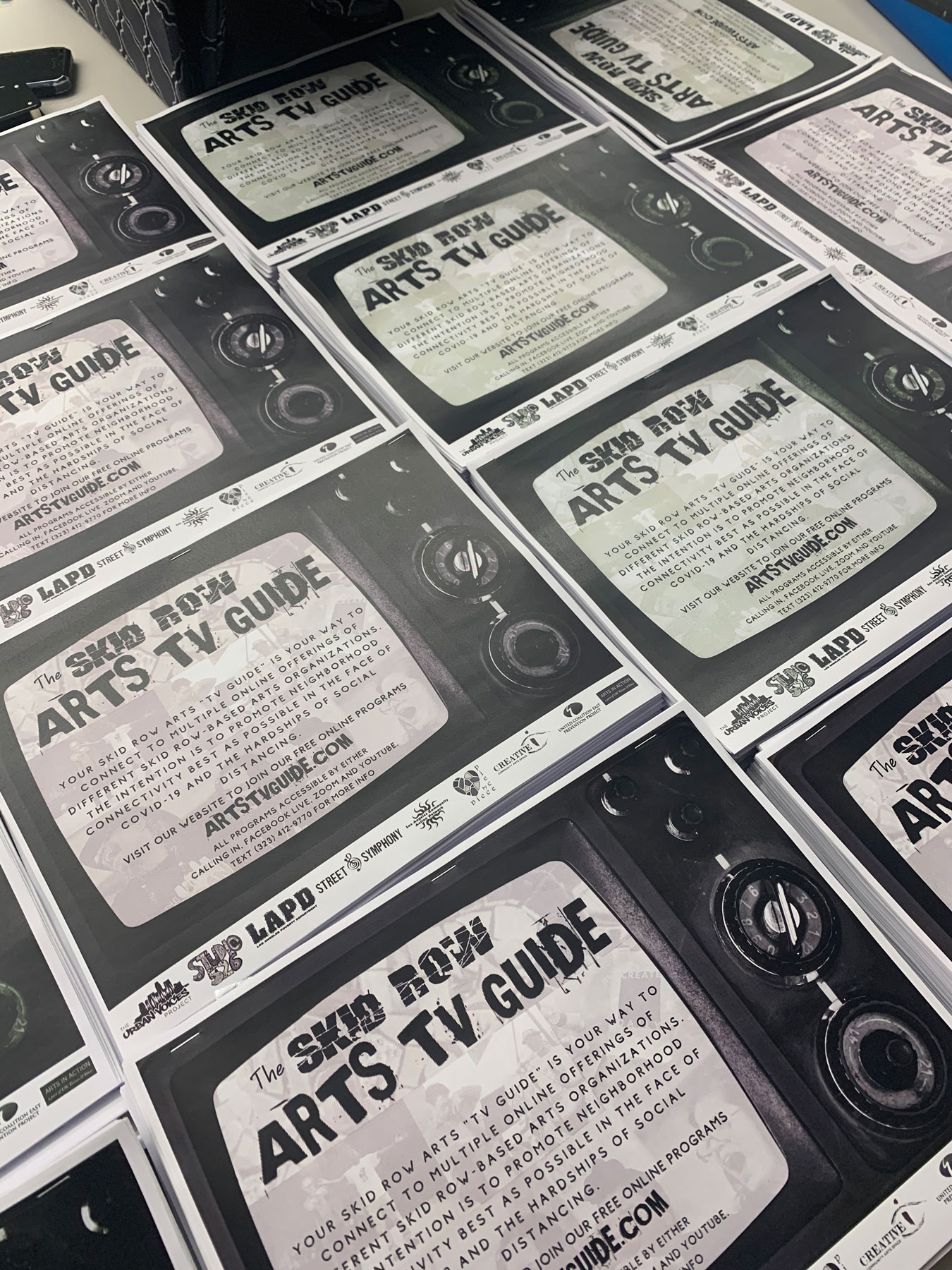 The expanded Skid Row Arts zine includes maps of COVID testing sites, port-a-potties and hand-washing stations, as well as a schedule of arts programming and activities. (Photo/Courtesy of William Warrener)

“Sometimes we take advantage of how much it means to just get quality paper,” Sofer said. “The world has gotten so used to moving towards smartphones and tablets that we’ve left a lot of people behind that we don’t think about.”

Ana Riera-Pepe understands that from both a personal and professional perspective. She currently serves as the choir manager of the Urban Voices Project, but at one point in her life she was also a Skid Row resident.

In addition to participating in the various arts programs around Skid Row, Riera-Pepe also helped distribute the first round of packages. She said they’ve been an enormous help hygienically with the masks, artistically with the actual supplies and structurally with the zine full of activities and resources.

“The packages keep people’s minds on something positive, fun and pleasant for a period of time,” she said. “Just to be able to leave a stressful moment for even a little bit is very much a blessing.”

Moving forward, Sofer encourages those who live around the Skid Row community or work within it to value what it means to truly be able to “go home” at the end of the day. Now that working from home has become a mainstay for anyone who has the ability, Sofer said it’s important to remember that for people who don’t necessarily have that option, art supplies can truly mean so much.

“This [arts package] keeps people from feeling abandoned. For some people, their livelihood was coming to our programs; it was the thing that got them out of bed,” Sofer said. “We’re going to just keep pushing through and see what other opportunities arise to keep the arts alive.”

Sofer and Cornell are continuously looking for bulk art supplies, PPE and tech access donations (headphones, portable chargers, etc.). They plan to keep the program going throughout the COVID-19 pandemic and hope to have capacity to expand the list of Skid Row artists in need. For those interested in supporting, email at sraa.tvguide@gmail.com.

These health care professionals treat some of L.A.’s most vulnerable on the streets they call home.