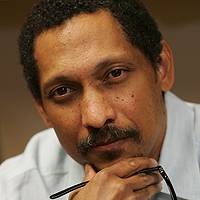 The USC College Distinguished Professor’s new novel tells is a rumination on the state of the country.

Percival Everett never set out to tell the tale of a lunatic who repeatedly tortures a man.

In Everett’s 20th book, The Water Cure (Graywolf Press, 2007), the narrator is Ishmael Kidder, who binds a man with duct tape, locks him in his trunk, then drives from downtown Los Angeles to his isolated second home in the mountains of New Mexico.

There, Kidder keeps the man in his basement and continually waterboards him � a technique once referred to as “the water cure” in which the victim is strapped to a board while water is poured over his face to simulate the feeling of drowning.

“It’s not a place I planned to go,” said Everett, a Distinguished Professor of English at USC College. “It was mostly a reaction to the sadness and state of our country and our culture and what we seem to be capable of.”

In the novel, Kidder makes no secret that he waterboards his prisoner � a technique used to interrogate suspects during the war on terror � because his country has “taught me to torture.”

But Kidder, a divorced and broken romance novelist, has other reasons for his lunacy. Driven by the anguish of grief, he becomes a vigilante after the rape and murder of his only child, 11-year-old Lane. Some of the novel’s most stirring moments center on the father’s bond with his daughter, whose favorite color was blue and who had “a head full of wild dark hair.”

In one reflection, a sharp-minded, 5-year-old Lane becomes concerned about the fate of her goldfish, Goldie, and asks her father whether people eat goldfish. He tells her no.

Kidder feels he is forced to take action when police lack enough evidence to hold Reggie, the prime suspect. Inside Kidder’s damp basement, he ponders the man’s claim of innocence:

Deciding that Reggie is lying, Kidder proceeds to torture him, nicknaming him W, renaming him Art and later Frenhofer.

Weaved throughout the grisly plot, there is no mistaking the “death of innocence” theme. The innocent child’s tragic death appears to represent the reported abuse in the Abu Ghraib prison in Iraq, Guantanamo Bay, Cuba and elsewhere � and the death of this country’s innocence once again.

In an interview, Everett conceded that he did make that connection but said that each reader will interpret the work differently.

“The reader is going to make whatever meaning she or he wants to make,” Everett said. “Or they may not make any meaning of it at all.… It’s exciting to find at some point along the way what it does mean to someone else. And it could mean something that I never intended. That’s the beauty of art.”

Art, it turns out, is a major aspect of the book, which reads like the diary of a deranged, highly intelligent and introspective man � an odd bird so paranoid he brings his own food (stew he made with elk he hunted) to restaurants and pays $30 for a plate.

On other pages, Kidder’s childlike scrawl relays messages such as “Each child is an innocent,” with some of the letters backwards.

The simple drawings and hand-scrawled messages are juxtaposed against pages of ancient philosophical arguments Kidder has with himself, as he evokes the voices of Aristotle, Socrates and Plato. Peppered throughout the prose are word puzzles, jokes, poems, limericks and linguistic theory musings.

In one of several conversations Kidder has with dead people, he exchanges barbs with the cantankerous ghost of Thomas Jefferson, who has joined him on his reckless ride to New Mexico. Again, Kidder contemplates the meaning of words, when Jefferson asks, “Tell me friend, what do you think cruel and unusual punishment is?”

“I suppose I’d have to know first what is not cruel and what is usual. If not cruel is kind, then is it in fact punishment? And it seems to me that kind punishment sounds a bit unusual.”

Everett plays with structure. Equally important are “the talk of meaning and how words come to make meaning and how they can be meaningless,” he said. “To me, it becomes more important on a rudimentary level about logic and connections that my mind makes.”

The interruptions serve to shift a reader’s awareness from the emotional to the logical, moving the subject of torture from the heart to the head. For the reader, the shifts create a kind of detachment, and Kidder’s cool detachment somehow begins making sense.

But don’t kid yourself if you think you have the book figured out. Just ask the author what it all means.

“If I tried, I would be pretending,” Everett said. “I can’t tell you what it’s all about, either.”

A Writer Who Takes No Prisoners