A new analysis of USC’s Understanding Coronavirus in America Study has found that women, particularly those without a college degree, suffered more job losses than men and bore significantly greater responsibility for child care during the COVID-19 pandemic.

Scientists at the Center for Economic and Social Research (CESR) at the USC Dornsife College of Letters, Arts and Sciences, which conducts the study, found one-third of working mothers in two-parent households reported they were the only ones providing care for their children, compared to one-tenth of working fathers. Higher levels of psychological distress have also emerged among women with children, compared to women without children and to men with or without children.

First, the pandemic has devastated service-oriented sectors that employ more women like restaurants, hotels and hospitality, leading to more job losses, she said. Secondly, as schools and daycares closed and as stay-at-home orders made it difficult for family members like grandparents to help, child care needs soared. 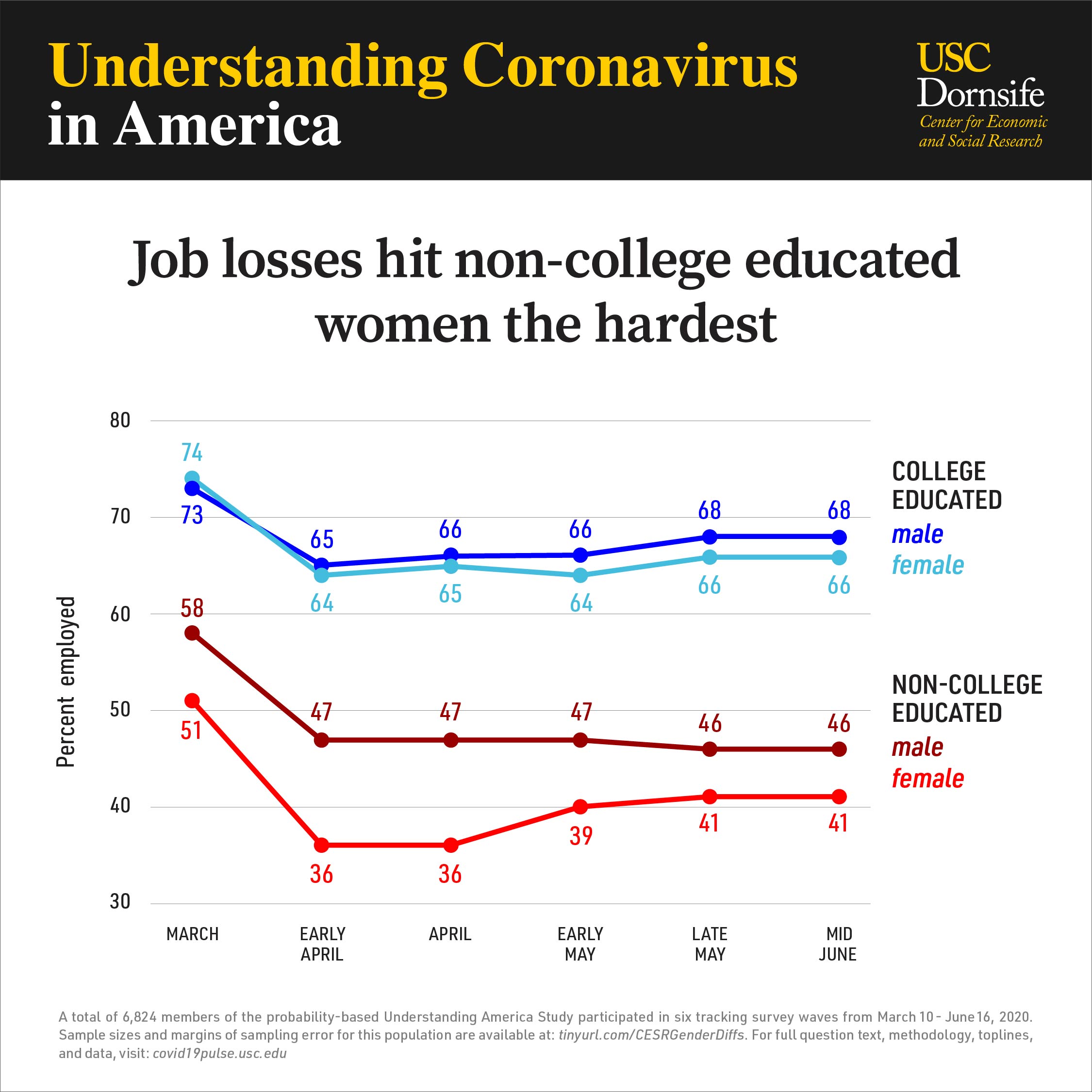 “Considering women already shouldered a greater burden for child care prior to the pandemic, it’s unsurprising the demands are now even greater,” said Zamarro, who is also a professor at the University of Arkansas. “While men are more likely to die from infection by COVID-19, overall the pandemic has had a disproportionately detrimental impact on the mental health of women, particularly those with kids.”

Since the start of the pandemic, less educated women have suffered the greatest job losses, the results show. They suffered a 15 percentage-point drop in employment in early April compared to March, while men without college degrees during that same period experienced an 11-point drop.

Although states, counties and cities are reopening, as of early June, just 41% of non-college-educated women and 46% of men were employed.

Meanwhile, college-educated men and women are experiencing job losses at similar rates: employment for both dropped from about 74% to 67%. 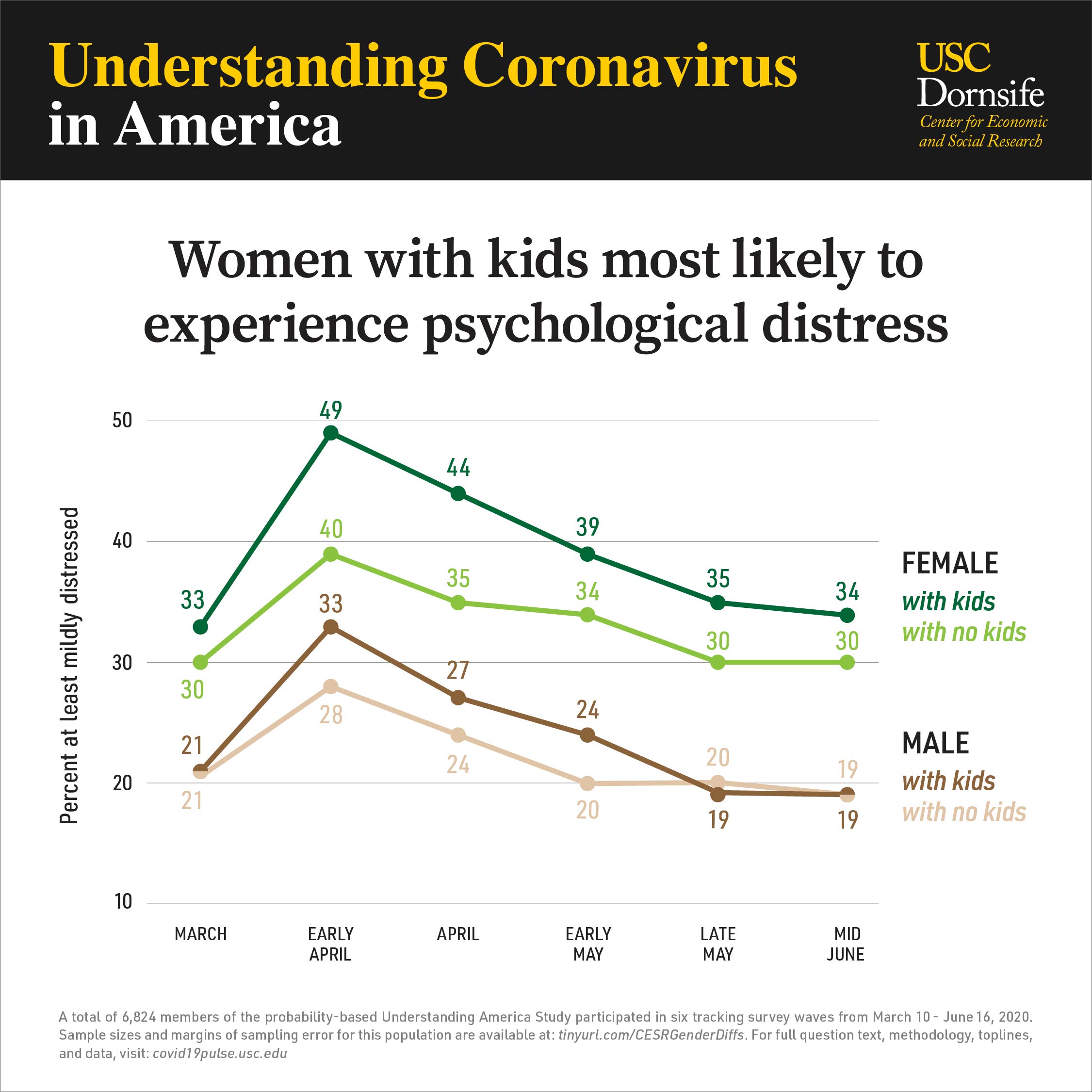 Women have long reported higher levels of psychological distress than men, but the COVID-19 pandemic is associated with even greater feelings of anxiety and depression among women with children.

Moms reported a huge spike in psychological distress in early April, compared to women without kids and to all men. The level steadily eased through early June to pre-pandemic levels, but women remain disproportionately impacted.

The analysis found more women than men took on child care duties after schools closed in response to the coronavirus: 44% of women in early April reported being the only household member providing care, compared to 14% of men.

The disparity was notable among working parents, including those working from home: 1 in 3 working mothers in early April reported that they were the main caregiver compared to 1 in 10 working fathers.

About the survey: Since mid-March, CESR’s researchers have surveyed a panel of around 7,000 U.S. adults regarding their perceptions and attitudes about coronavirus and the impact of coronavirus on their lives. Graphs from the biweekly tracking survey, which is supported in part by the Bill & Melinda Gates Foundation and USC, are updated daily and available to researchers and the public.

A total of 6,824 members of the probability-based Understanding Coronavirus in America study participated in six tracking survey waves from March 10 through June 16, 2020. Sample sizes and margins of sampling error for the populations in this release are available in the full study report.

Coronavirus survey finds that only 45% of L.A. County residents still have jobs

People of color are more likely to suffer financially and mentally from the COVID-19 pandemic, according to USC Dornsife’s Understanding Coronavirus in America study.

Bracing for coronavirus, U.S. residents are changing their behavior

A new USC survey offers a snapshot of how coronavirus has changed behavior in America, from stockpiling emergency supplies and food to hygiene.