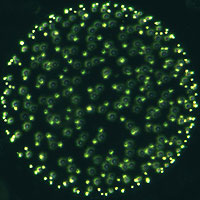 Many people think the species called Phaeocystis is too undesirable to fit into the regular diet of marine creatures.Courtesy of Peter Countway

Faculty and doctoral students from the USC College’s Wrigley Institute for Environmental Studies will sail to Antarctica early next year to see if and how small unpalatable algae turn into building blocks for the marine ecosystem.

USC College biologist David Caron will lead the research trip, and the crew will include five members of his research lab as well as USC biologist Karla Heidelberg.

Together, the group will spend much of January and February aboard a ship in the Ross Sea running experiments to determine what organisms feed on local phytoplankton, including a species called Phaeocystis that many people think is too undesirable to fit into the regular diet of marine creatures.

The two-month trip will be supported by the National Science Foundation.

Caron said the research voyage will focus on a section of the polar food chain that lies between tiny marine plants at one end, with birds, fish and marine mammals at the other.

“In the Antarctic, a lot of work has been done at the very base of the food chain looking at the phytoplankton � how those populations change during the spring and summer, how much production takes place and how the species composition changes,” Caron said.

“And a lot of work has been done on the other end of the food chain looking at populations of marine mammals and seabirds � penguins, seals and whales, the larger ‘charismatic macrofauna’ that get a lot of attention,” he continued. “But the middle of the marine food chain is poorly known in all polar environments � in Antarctica and in the Arctic environment as well.”

Caron, Heidelberg, four doctoral students and one technician will fly to New Zealand on Jan. 4 and sail on a research ship toward Antarctica on Jan. 9. On the first leg of the trip, they will take plankton samples and run experiments in the Ross Sea along the continental shelf at Terra Nova Bay. At the end of January, they will spend two days at McMurdo Station and then head into the Ross Sea to conduct similar sampling and experiments further from shore.

The open waters are different, however. They are dominated by another form of algae that may be unpalatable for copepods and krill, and that raises a question about what, if anything, is eating this stuff and how it might factor into the food chain.

The algae Phaeocystis is known for its ability to form floating colonies in which each cell of phytoplankton is embedded in a matrix of mucous-like gel.

Caron and his researchers are working on a hypothesis that the unpalatable algae is being eaten by voracious single-celled organisms known as protozoa, and that the protozoa are in turn eaten by other organisms � especially krill and copepods. If that proves to be the case, the protozoa are transforming unpalatable algae into food that is essential to the entire marine food chain.

“We are expecting to see that change,” Caron said. “And that would make a fundamental shift in how we conceptualize the food web in some of these polar environments.”