While George Floyd was laid to rest in his hometown of Houston on Tuesday, just over 1,500 miles away the USC community held its own vigil online for Floyd, Breonna Taylor, Ahmaud Arbery and all of the Black lives lost at the hands of racism and oppression.

The vigil, “Say Their Names: Honoring Black Lives,” featured speeches from USC administrators, faculty members and a 2020 alumna, as well as 8 minutes and 46 seconds of silence — the amount of time a Minneapolis police officer pressed his knee against Floyd’s neck until he died.

Dismissal and denial are deeply embedded in our culture.

As the vigil’s first speaker, USC President Carol L. Folt called on the Trojan community to “honor the Black lives lost, the protests, the sacrifices and pain, with enduring commitment to dismantling forever structural racism.”

“This means not just saying good things, but really opening our eyes to see that at USC — in spite of all our strengths — dismissal and denial are deeply embedded in our culture,” Folt said. “It means listening to our Black students, faculty, staff and neighbors, and admitting that we have been blind to and actively ignored what is happening to them, right in front of us — that we, even those with best intentions, have been complicit.” 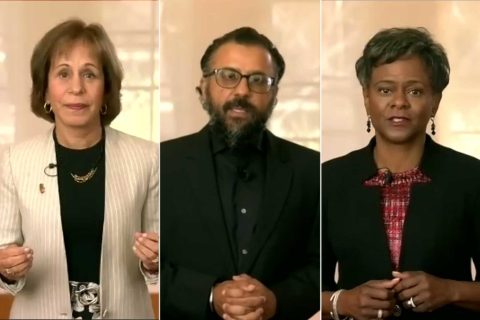 Folt finished by encouraging the USC community to be at the forefront of change in two ways. The first is listening to the Black community on and off campus and figuring out more and better ways to add our strength to it. The second is finding the courage to see ourselves, our culture, our nation and our own USC community more clearly — and to take responsibility for anti-Black racism.

Varun Soni — whose Office of Religious and Spiritual Life sponsored Tuesday’s vigil — noted that even during a pandemic, the video of Floyd’s death sparked a reinvigorated movement against injustices faced by Black Americans.

“Several months ago, a new plague drove us all indoors and away from each other. And several weeks ago, an old plague drove us all outdoors, into the streets and back towards each other,” said Soni, dean of religious and spiritual life and vice provost of campus wellness and crisis intervention.

The old plague of anti-Blackness demands that we socially reengage and spiritually reconnect — right here, right now, with each other.

Soni emphasized the impact of anti-Blackness and how it “continues to infect virtually every discipline and domain of American life,” before issuing a call to the USC community to take up the challenge of the moment. Soni said the names of 34 Black lives taken by racism and oppression, before proceeding to the 8 minutes and 46 seconds of silence.

Despite recent horrors, protests illustrate power of the people

Renée Smith-Maddox, clinical teaching professor in the USC Suzanne Dworak-Peck School of Social Work, then spoke about the suffering Black Americans have endured in the country. She also noted that despite recent horrific incidents, she is optimistic.

“I am humbled by these times, yet remain energized by the possibilities ahead,” Smith-Maddox said. “The diverse crowd of protestors around the country illustrates the power of the people.”

Joelle Ferguson, a 2020 graduate of the USC Annenberg School for Communication and Journalism, spoke on grief and how — despite feelings of sadness, anger and confusion — it can also awaken a sense of hope, purpose and opportunity. 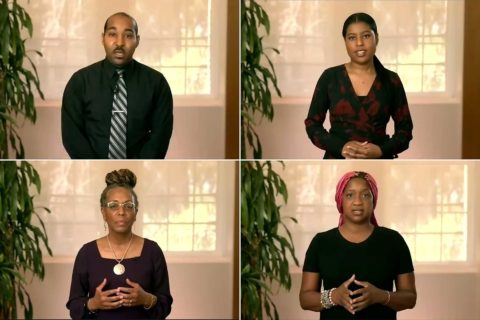 “I want to take this time to applaud the Black community for consistently and swiftly turning suffering into hope, from taking the senseless killings of millions and turning it into an opportunity for reform, unity and love,” Ferguson said. “But just because we know how to turn grief around doesn’t mean we should be forced to do it nearly every day of our lives.”

Greedley F. Harris III, director of the Center for Black Cultural and Student Affairs, spoke about ending the need for “preparing” Black children to confront racism.

The Rev. Najuma Smith-Pollard, program manager of the USC Cecil Murray Center for Community Engagement, spoke about her calling to do the right thing, at the time and for the right reason. It’s an idea that Smith-Pollard said doesn’t seem radical until it’s “juxtaposed with vitriol, hate, injustice, pain, anger and evil.”

I refuse to believe that we’re helpless and can’t change this.

“Sometimes the most radical thing we can do corporately, but more important individually, is to do just that: the right thing,” she said.

The final speaker, Senior Vice President for Human Resources Felicia Washington, focused the vigil’s closing remarks on the aftershocks of these instances of brutality, oppression and racism. Though these issues have been talked about in the past, she said, now is the time for action — at a national, local and individual level.

“I refuse to believe that we’re helpless and can’t change this,” Washington said. “I’m challenging myself, and I’m challenging each of you to figure out what our personal commitments will be. What will they be to end racism?”

USC has organized a number of online discussion events in the wake of Floyd’s death, and university leaders have issued strong statements of support.

Coronavirus deaths and those of George Floyd and Ahmaud Arbery have something in common: racism

Stress from racial discrimination could partially explain why African Americans are at higher risk for severe COVID-19 outcomes.