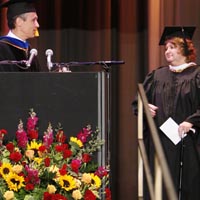 The Peter Stark Producing Program in the USC School of Cinematic Arts will mark the end of an era this month when 23-year veteran Kathy Fogg �long revered for her warm, personal attention � retires from her post as associate director.

“It’s hard to imagine not being here, because I remember saying to myself when I first started that I would leave when I stopped falling in love with the students and that never happened,” Fogg said, reflecting on the program that has groomed business and creative leaders for more than a quarter century.

“Kathy has been the heart and soul of the Stark program,” said Stark Chair Larry Turman. “By her example she has taught more important things than film/TV � that is compassion and dedication.”

From early on, Fogg has always had a driving interest in film. Taking cinema classes with contemporaries like George Lucas, Fogg graduated from the USC film program in 1967. Her parents, however, were none too keen on her entering that field, so she focused her talents on public relations.

Getting married, raising a family and with a successful P.R. career to her credit, Fogg once again felt the USC allure when the program’s founding director Art Murphy � whom Fogg called “a great curmudgeon and everybody’s most unforgettable character” � needed a right-hand person in 1984.

Over the course of the past 23 years, the industry has grown and so too has the Peter Stark Producing Program. Fogg is quick to point out that “we have to keep changing the curriculum to stay cutting-edge. We don’t ever want to be last year’s news. We’re always asking what we can give the students so they can succeed. When you think about it, that very first class was pretty brave to try something that’s never been done.”

Asked about the continued popularity of the program, Fogg said that word of mouth and the graduates themselves have been the best publicity. And with the only advertising done in Stark’s early days by an ad in Variety that Murphy placed, Fogg recalled a conversation she once had with a student from Germany telling her about the program’s popularity in Europe. “How did we do that?” Fogg said with a laugh.

Part of the success no doubt stems from the intense personal attention Fogg has shown the students over the years.

“Kathy’s a mother figure in an office that’s overwhelmingly male,” said 2007 Starkie Iram Parveen Bilal, who credited Fogg as not only instrumental in bringing her to the school but also quickly pointed to numerous occasions where Fogg went above and beyond what one would expect, including the time the associate director made herself available at home the weekend before thesis films were due to “make sure everyone was doing well.”

Echoing her fellow Starkie’s praise of Fogg, Bobette Buster ’89 recalled how amid a setting where Murphy “purposely had this persona of keeping everyone at a huge distance,” it was Fogg’s “true quiet force” that kept the program going.

“There are so many unstated and unheralded things that Kathy observed and took on,” said Buster, who is also an adjunct faculty member. “She became the soul of Stark. I really believe that the program is indebted to her vigilance. All of us � from my class on � owe her a huge debt because she chose us to be here.”

In contact with nearly every one of those graduates, Fogg can tell anyone the commencement year of any Starkie without looking at a database.

“The personal attention is what makes my job so meaningful,” said Fogg, who admitted that she’s been stumped only once � by two people she didn’t recognize at the Stark 25th anniversary celebration in 2005. They were, however, immediately identified as soon as she heard their voices.

“I want everyone who contacts Stark, whether they walk through that door, e-mail us or call, to have a good experience.”

Fogg’s departure from the office is hardly the end of her Stark experience: She’s already hard at work writing a book that documents the program’s history.

“I want to be sure to capture the collective graduate voice on paper,” she said, mentioning that when she’s finished, she plans to rework and publish compositions first written by her mother.

And before turning back to the business at hand � interviewing potential candidates for the 2008-09 academic year � Fogg merely smiled at any mention of praise.

“I don’t need accolades for what I’ve done,” she said. “Even with the tough love I’ve had to occasionally administer, I’ve enjoyed every minute.”