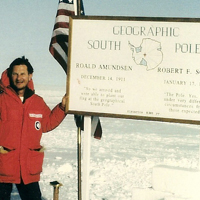 USC professor Lawrence Palinkas was part of a 1993 expedition to the South Pole. His most recent visit was in 2004.

While most enjoy the challenges posed by the extreme conditions of the Arctic, a new study suggests as many as half of the hardy adventurers may experience periods of depression, sleep disruption, memory loss, anger and conflict with fellow participants. Five percent suffer symptoms severe enough to warrant treatment with medication or therapy, the researchers said.

In a paper published in The Lancet, USC School of Social Work professor Lawrence Palinkas and Peter Suedfeld of the University of British Columbia examined the psychological effects of long stays in polar regions, documenting the mental health impact of isolation, harsh environment and light changes on polar explorers.

“Some people may have difficulty adjusting to the light-dark cycles, and so they can never get a decent night’s sleep and experience a sleep disorder,” Palinkas explained. “Some people can get clinically depressed, either due to changes in levels of thyroid hormones as the body adapts to cold temperatures or to the prolonged separation from family and friends. Some people just can’t handle the confinement, seeing the same people day in and day out for extended periods of time.”

The authors pored over decades of published data and personal diaries, interviewed those living and working for extended periods in the Arctic and Antarctic, and scrutinized information from countries maintaining permanent polar research stations. They found that members of some of the earliest expeditions to these regions experienced what was often referred to as “polar madness,” resulting in mutiny, lunacy, cannibalism and suicide.

The researchers believe the negative emotional effects resulting from long polar missions can be minimized using a variety of methods, including more rigorous psychological screening of applicants and providing mental health counseling via telephone or satellite. Many of those who may not cope well in polar settings had no previous history of mental disorder, Palinkas noted.

Surprisingly, the authors emphasized that alongside the psychological and physical demands, polar stays often boost well-being and self-esteem. In fact, a survey of Australian explorers in Antarctica suggested that although there were plenty of negative reactions, it was far more common for the expedition members to have a positive experience.

Many people felt a strong sense of accomplishment after having successfully completed a trip, volunteering to return in the future.

The authors found numerous references to the beauty and grandeur of the land, the camaraderie and mutual support of the team, the admirable qualities of their leader and the thrill of conquering nature. Many expedition members expressed pride in having learned to cope with or adjust to some of the very problems highlighted in the research.