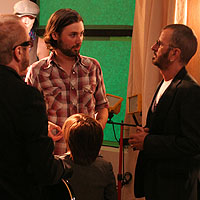 USC alum Seth Dalton, with co-director Dave Stewart at far left, goes over the video’s concept with Ringo Starr and a youngster who plays the musician as a boy.

If anyone doubts whether the “USC mafia” is alive and well, they need look no further than a new video from music legend Ringo Starr.

Starr’s new single, “Liverpool 8,” was co-directed by Dave Stewart of the Eurythmics and Seth Dalton ’06. The nostalgic track, which was co-written and co-produced by Stewart, is from Starr’s upcoming album and features four USC production alums in key roles as well as 12 other Trojans in various crew positions.

The video was a production of Stewart’s company, Weapons of Mass Entertainment.

“It’s funny, but I felt more stressed during my time at ’SC than I did working on this video,” said production MFA candidate Paolo Borraccetti ’07, who along with Chase B. Kenney ’07, served as the video’s producers.

“We had one day to shoot, and through the entire day I kept thinking to myself, ‘I’m working with Ringo Starr and Dave Stewart,’ ” he said.

Dalton found himself working for Stewart after applying for a part-time editor position posted by the Eurythmics legend on the USC School of Cinematic Arts job board.

“You get this idea that you need to work as someone’s assistant when you leave school, but I had a skill set as a cinematographer and an editor, and that’s where I wanted to focus my energy,” he said.

“A year ago this time, I was literally directing furniture in commercials.”

Since joining Weapons of Mass Entertainment, Dalton has been very busy, editing everything from Stewart’s 2007 concert DVD to commercials for Nokia’s content-sharing Web site MOSH. He and Stewart currently are developing a feature-length documentary, and Stewart’s company has two other features slated over the next 18 months.

“This is such a unique opportunity,” said Borraccetti, who produced Dalton’s thesis film.

Dalton said, “I brought Paolo on because we’ve worked well together in the past. He was the ringleader in getting all USC folks. Even the casting director was recommended by someone we knew from school.”

Dalton developed a few treatments based on Stewart’s basic concept of Starr paying homage to his hometown amid a kaleidoscope of images and a child who plays the young Ringo. He had two weeks of pre-production with his team before the former Beatles drummer arrived for a mere six hours of shooting time.

With classic footage donated from Apple Records, the video was made entirely in WME’s fifth-floor office space, which was turned into a mystical warehouse lit by Matt Egan ’06. Dalton said he never felt “more confident as a director than I did on this set.”

“He asked, ‘Who’s the man?’ and when I said I was co-directing with Dave, he laughed and said, ‘Then you’re the man.’ Ringo Starr is waiting for me to tell him what to do,” Dalton recalled. “And he just called me the man.”

Both production grads credit their time at USC for giving them a “seamless transition from school to the real world.” They said that the video experience has accelerated their learning curve. Having Starr approve the first cut within a week after filming was “just incredible,” and the video is now set for release this month.

Although the two friends admit that the worlds of film and music have “totally different vibes,” both men look at their experience with Starr and Stewart as a chance of a lifetime.

“Dave makes people like me better,” said Dalton, who hopes that “this will be a long-term partnership.”