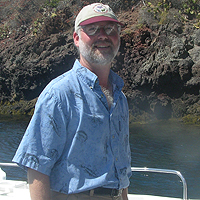 It is difficult to store large amounts of carbon for long periods of time in the ocean, according to Michaels, the director of the USC College’s Wrigley Institute for Environmental Studies.

As the discussion of global warming becomes more serious, there is more talk about options for dealing with the carbon dioxide already in the atmosphere.

Some people say we could store millions of tons of carbon in the ocean if we encourage the growth of microscopic marine plants by “fertilizing” the water with dissolved iron.

A perspective in the current issue of the journal Science states that the idea is intriguing, but it would require solid verification before it entered the market for carbon credits. The authors say that the verification research would have to show that the mechanism is effective and environmentally safe and that any negative impacts were balanced by the positive effect of reducing greenhouse gases in the atmosphere.

Anthony Michaels, director of the USC College’s Wrigley Institute for Environmental Studies, said the point of the paper is not that ocean iron fertilization is a bad idea, but rather that it requires more proof, both as a general idea and each time it is tried in experiments.

Michaels is one of 16 authors on the article, which appears in the Policy Forum of the Science issue published Jan. 11. He said the paper reflects a consensus among scientists of many different perspectives about the research that would need to be done to prove that ocean iron fertilization safely stores carbon.

The concept appeals to some entrepreneurs because there might be a big market for companies that can show they removed carbon dioxide from the atmosphere and stored it in the water. Companies that did this might be able to create “carbon credits” that they could sell in states and countries that use cap and trade markets to curtail overall net emissions of carbon dioxide.

Michaels said such a market for carbon credits would require scientific documentation of how much carbon was sequestered in the water and how long it would stay there.

“Our paper makes a simple hard statement: You shouldn’t sell carbon credits until you know how much carbon is stored,” Michaels said. “That’s the key point. You can’t just sell these credits because you guess that carbon is going to be stored. In our opinion, you must actually demonstrate that it did happen. However, if this practice can be shown to predictably store carbon, it could be an important tool for managing greenhouse gases in the future.”

Adding iron to the ocean can encourage several biological processes that sequester carbon dioxide. Iron spurs the growth of microscopic plants and bacteria: These organisms remove carbon dioxide from the water during photosynthesis, by growth on existing nutrients or by the conversion of nitrogen gas to organic nitrogen. However, that is only one step toward carbon sequestration. Long-term storage only will occur if the carbon that’s absorbed into this organic matter at the surface then settles into deeper water or falls all the way to the ocean floor.

Michaels said this last point is critical to proving the efficiency of ocean iron fertilization. The oceans already “breathe” billions of tons of carbon dioxide in and out every year. Michaels said much of that CO2 is absorbed only into the surface water, and so it is easily released back into the atmosphere.

“It would be very easy to store huge amounts of carbon in the oceans for very short periods of time,” Michaels said. “It’s much more difficult to store large amounts of carbon for long periods of time. The oceans can take gigatons of carbon out of the atmosphere every year if we don’t care if it comes back in a few years or a decade. Removing carbon and storing it in the ocean for longer than 100 years � which is the ‘canonical number’ for marketing carbon credits and offsets � is a trickier thing to do. The question of how to do it is something science must address to create a responsible market.”