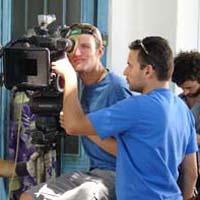 Both will receive honorable mentions for the society’s Laszlo Kovacs Heritage Award during the society’s annual gala in Hollywood.

“As a filmmaker you’re constantly questioning where you stand and where your talent is,” said Eisenhardt, whose work on Paperboat earned him the recognition.

Steeped in the roots and inspiration of the Greek homeland of writer/director Daphne Lambrinou ’05, the film about love, security and the nostalgia of a sweet memory also earned a Directors Guild of America Student Film Award last January.

“Receiving this recognition helps push you a little further toward your next project,” he said.

“It’s pretty exciting,” said Wang, who worked on China with director Jacob Hatley ’06. The film, shot in black and white, follows the story of a cowboy seeking to prove he still has what it takes to track down an escaped prize bull. “To have something so well made in every aspect be recognized outside of school feels great for me and for everyone who worked on the film.”

Established in 1998, the Heritage Award � which is rededicated annually to the memory of a different cinematographer � is given either to a student in his or her final year of film school or a recent graduate. Both Eisenhardt and Wang are two of five filmmakers receiving the honorable mentions.

Shooting their films on location � Eisenhardt on the island of Crete and Wang in North Carolina � both cinematographers agreed that their time at the school “prepared us to be ready to improvise.”

For example, Wang never saw the dailies while she was shooting because there were no firms near the location that could process the black-and- white film stock they were using.

“I had no clue what it would look like and that’s scary and stressful, but I felt confident the footage would turn out well,” she said, explaining that the exposed reels could only be processed at the Kodak facilities in Los Angeles. “I love the mystery that shooting on negative film can bring to the final look.”

From one part of the world to the other, the shooting experiences of both cinematographers could not have been more varied.

With temperamental cows, horses and the South’s natural elements, Wang remembered China’s set as “insane but really fun.” For Eisenhardt, one of the toughest choices he had to make with the picture-perfect days in Greece was to “decide if we wanted to wait for the sun to come out from behind this tiny wisp of a cloud.”

While the filmmakers said that becoming cinematographers felt like a good fit after exploring all that school had to offer, both added that they were well prepared once they stepped on the set of their respective short films.

“Even now, when you meet other USC folks, you know what they’re going to bring to their work because you know how the school trains its students,” Eisenhardt said.

Throughout their experiences, both said that the energy and “gung-ho” attitude they had on China and Paperboat were something they hope to never lose as they pursue their careers. While Eisenhardt continues his short films and promotional videos, Wang is putting the finishing touches on her thesis film and currently is looking to shoot her first feature.

And while “it’s a treat to see our films in a theatre and talk about our movies,” Wang said for now she’s concentrating on just what to wear for the gala event.

With his tux already cleaned, Eisenhardt simply shrugged and smiled. “For me, it’s easy.”