Before deciding to come to USC, Isabella Hauptman found herself in a predicament. The Los Angeles native knew she wanted to become an epidemiologist but didn’t quite know which specific degree path — or even which specific university — would help get her there.

Despite growing up less than 20 miles north of USC’s University Park Campus, being a Trojan was not always on Hauptman’s mind. It wasn’t until she took a closer look at the progressive degree program offered at USC — along with a scholarship — that Hauptman decided to stay home.

After four years of classes, several internships and countless volunteer hours, Hauptman will graduate on Friday with her bachelor’s degree in cognitive science and a minor in public health from the USC Dornsife College of Letters, Arts and Sciences. The 22-year-old has already started working toward her master’s degree and was named USC’s valedictorian for the Class of 2020.

When looking at Hauptman’s academic and professional experience, it’s clear that the 22-year-old has a passion for helping others. She has a particular fondness for helping children, probably because she can relate to being in the hospital at a young age.

As a child, Hauptman suffered from a neurological disorder known as complex regional pain syndrome. The disorder consists of chronic arm or leg pain that can randomly develop after an injury. When she was 12 years old, Hauptman said she stepped out of bed one morning only to feel excruciating pain in her foot — enough to where she couldn’t support any weight. As a softball player, she had suffered previous leg injuries but nothing recent.

“It’s not dissimilar to phantom limb pain,” she said. “Something happened in my nervous system where it kind of tripped the wires, and I was getting all the signaling of pain and injury.” 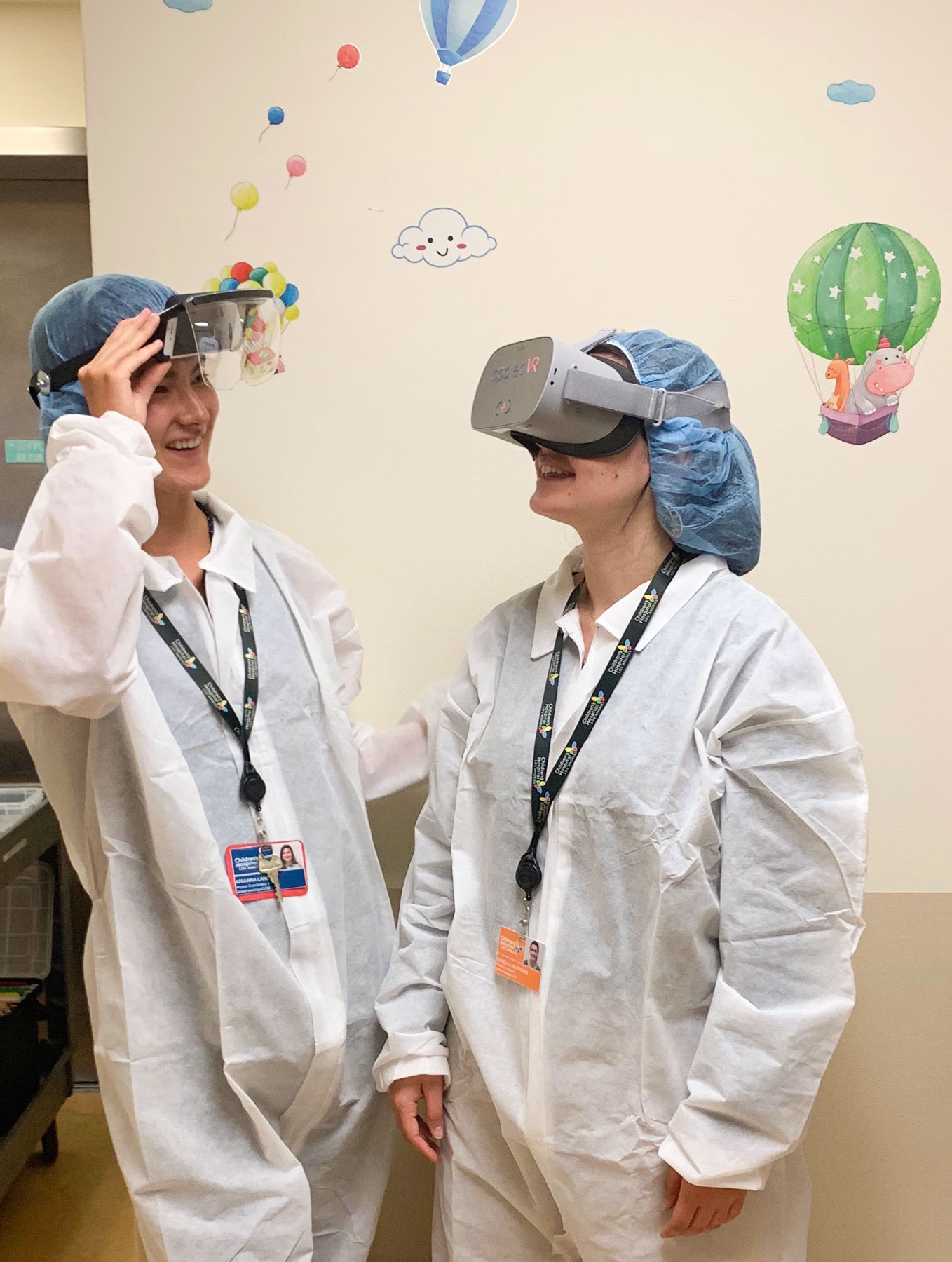 Hauptman, right, tries on virtual reality equipment before entering the Ambulatory Surgical Center at Children’s Hospital Los Angeles, where she worked as a research assistant in the Biobehavioral Pain Laboratory. (Photo/Courtesy of Isabella Hauptman)

Hauptman ended up spending two months at Lucile Packard Children’s Hospital at Stanford University, which had a specialized program that dealt with the disorder. There, she underwent rigorous physical and occupational therapy, as well as hydrotherapy, biofeedback therapy and even hypnotherapy.

“I was basically retraining my body to recognize that my foot was OK,” she said.

Fortunately, the treatment worked, and she was able to get back to her athletic routine. That experience is what Hauptman credits as the driving force behind pursuing cognitive science. Starting in 2018, she began working as a research assistant at the USC-affiliated Children’s Hospital Los Angeles in the Biobehavioral Pain Laboratory. Her primary focus was pain management — the perfect area given her personal experiences.

“Being exposed to all of the things that you would be exposed to in a children’s hospital was really sobering,” she said. “I knew — based on the relationships that I created and the things that I’d seen — that I wanted to make a difference in health care, so that was really motivating for me.”

Hauptman’s passion for helping others has extended beyond academics. Throughout her time at USC, she has been involved with Kesem National, a nonprofit that provides support to children through and beyond a parent’s cancer. Every year, Kesem provides a free weeklong summer camp — Camp Kesem — as well as year-round events for kids ages 6 to 18. 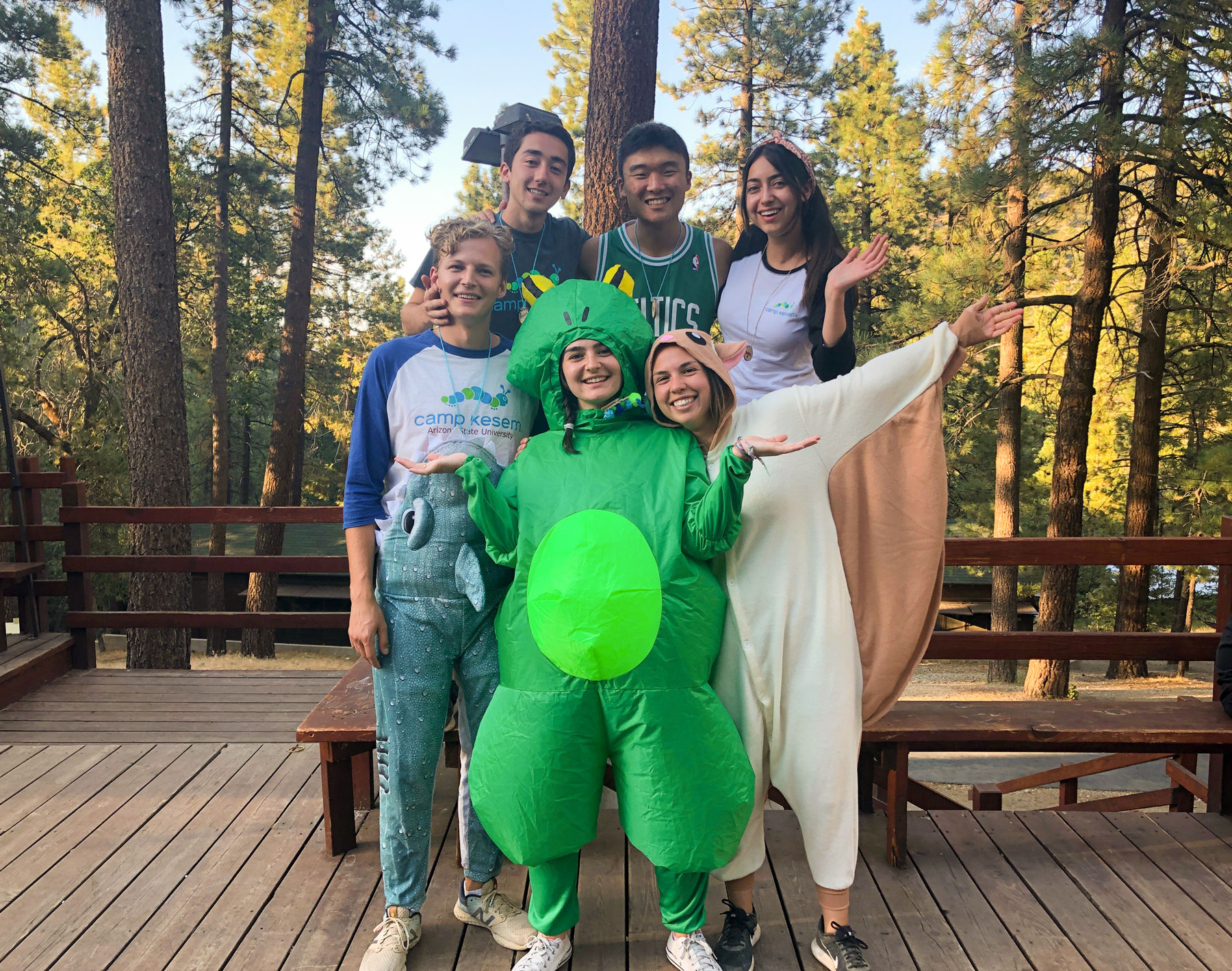 Hauptman in a frog costume representing her camp name, “Ribbet,” poses with her co-counselors at Camp Kesem last summer. (Photo/Courtesy of Isabella Hauptman)

She first learned about Kesem as a freshman at USC’s Involvement Fair and said the organization immediately struck a chord with her: She knows firsthand what it was like to be a child with a parent with cancer.

“I immediately was drawn to this because I had a personal connection,” she said. “I wish I had an organization like that when I was that age, just to know that I wasn’t alone, that other kids were going through similar things and that I had a community to support me.”

Hauptman’s mom is now in remission, but USC’s 2020 valedictorian said she still understands what it’s like for the kids at Kesem and how difficult even talking about cancer can be. Through her work with the organization, she hopes kids feel they can share whatever is bothering them — and that they don’t have to stop being a kid.

“Most of camp is just fun and games and giving kids that space to be kids,” Hauptman said. “They have people to talk to, and there are kids who are going through similar things.”

Due to COVID-19, the summer physical camp has been canceled, though Hauptman — who is on the organization’s executive board — said Camp Kesem will move online. Though she said she’s not quite sure how the camp is going to look, the important part is that the community that these kids rely on will still be there for them.

“It’ll be good, whatever form it takes, just to let them know that there are people there,” she said.

USC’s 2020 valedictorian is more committed than ever to epidemiology

As with just about every student at USC, Hauptman’s world moved online in the wake of COVID-19. Her organization, classes and internship at CHLA have all been replaced with emails and Zoom calls. Even her summer internship in Boston in a pharmaceutical clinical trial has moved online.

Not being able to see classmates, friends, coworkers and the Camp Kesem kids has been difficult. She said that as a student — and especially as a senior — it’s been a weird experience knowing that the last in-person class of her undergraduate career was in March. But she also views everything going on in the world from an epidemiology and research perspective — and if there is a silver lining, it’s that the field she has decided to go into is more important now than ever.

“If anything, it is more reaffirming because now it is out in the public,” she said. “For a long time, I’ve known that this type of work is just so critical, and now I think people finally understand that. But I wish these weren’t the circumstances for many reasons.”

Next year, Hauptman will graduate with her master’s degree in applied biostatistics and epidemiology from the Keck School of Medicine of USC’s Department of Preventative Medicine. Past that, she said she’d like to gain work experience for a few years before returning to get her PhD and eventually conducting her own research. She admits she isn’t quite sure what she wants to focus on, where she wants to get her doctorate from or even what she wants to research — she’s thrown out ideas like cancer or infectious disease. Right now, she’s focused on her master’s degree, her upcoming internship and graduation.

“I’m just so honored and grateful to USC to have the opportunity to get such an amazing education,” she said. “Just to be honored with this distinction … I have no words.”

Gavin Kress’ road to Los Angeles consisted of thousands of miles and a stop at another school but ended with him being named salutatorian for the Class of 2020.