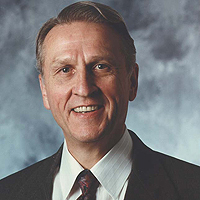 Staudhammer served as director and chief operating officer of the USC’s Mann Institute from 2003 until 2007.

Peter Staudhammer, who led a breathtaking variety of interdisciplinary scientific and engineering projects in both commercial and academic realms, died Jan. 14 after losing his battle with cancer. He was 73.

“Pete Staudhammer was an extraordinary engineer and a wonderful colleague and friend,” said Yannis C. Yortsos, dean of the USC Viterbi School. “His experience and leadership helped speed the process of technology transfer from the lab to the marketplace. More importantly, he helped catalyze new technology development in the school and in the biomedical engineering area.”

At TRW, Staudhammer was the chief engineer and one of the principal architects of the lunar descent engine for NASA’s historic Apollo missions to the moon, including the successful rescue of Apollo 13, which was accomplished with the lunar lander.

“Pete Staudhammer was an engineer’s engineer � a broadly competent engineer both highly analytical and innovative,” said Simon Ramo, co-founder of TRW. “He was such a nice man. Everyone � young engineers and senior experts � would come to consult him, as did all of the top executives. He will be greatly missed.”

He managed development of classified systems used today in national defense and was responsible for TRW corporate technology transfer that led to successful product lines. Among these was automotive electric steering with sales of more than $1 billion per year.

He pioneered hydrazine-fueled rocket engines, now a standard of spacecraft propulsion and developed space instruments for the exploration of Venus, Mars, Jupiter and Saturn. The most notable of these was the Viking Biology Experiment, the first such instrument to search for life on Mars.

When he retired as TRW’s chief technical officer and vice president for science and technology in 2002, he had been overseeing the efforts of 17,000 engineers and scientists worldwide.

He next served as director and chief operating officer of the USC’s Mann Institute from 2003 until 2007 when ill health forced him to resign.

“Peter was a very competent and very human person whose last years were devoted in large part to trying to make a difference in this world,” Mann said. “He was an effective leader at the Al Mann Institute and a great friend to all of us.”

Staudhammer continued to act as an industry consultant for Northrop Grumman, the U.S. Department of Energy and was a member of the General Motors Corporate Technical Advisory Committee. Early in his career, before going to TRW, he performed fundamental research on the combustion characteristics of rocket fuels at the Jet Propulsion Laboratory.

Staudhammer was a member of the National Academy of Engineering where he was cited for “fundamental contributions to space systems, plasma and microwave processes, instrumentation and its application to commercial systems.” He chaired or served on several of that organization’s committees.

He was a member of the President’s National Security Telecommunications Advisory Committee, the Magnetic Fusion Advisory Committee to the Secretary of Energy and served on numerous National Research Council committees. He was a member and/or chair of industrial advisory committees to engineering schools at UCLA, UC San Diego, UC Riverside, the University of Michigan, Case Western Reserve University and USC.

He was a devoted follower of opera who served on the board of the Palm Springs Opera Guild.

A resident of La Quinta, he is survived by his wife Marie, three daughters, three stepchildren and six grandchildren.