When Thomas Kim arrived at USC in 2016, he didn’t have his next four years specifically mapped out. One of the reasons he chose USC was because he was allowed to enter without choosing a major. Don’t think for a second that he had no goals, though.

Growing up around music, the San Diego native played piano and saxophone as a child and was a member of his high school marching band. So, when he arrived in Los Angeles, he set his sights on the Trojan Marching Band. He eventually worked his way up to squad leader, but before all of that, a small detail from his freshman year set the tone for his collegiate career.

As he picked up his uniform from the band office, he read a handout about a USC 2014 salutatorian who was in the band.

“At the time, I was of the mindset that I just needed a decent GPA to go to grad school,” Kim said. “But that flyer is what told me, ‘You can be the top of the top and still do [band] for four years,’ despite what people say about the time commitment.”

Kim also understood that he didn’t have to lose sleep, be constantly stressed or sacrifice his health to accomplish his goal. That mindset worked, as Kim was named one of two salutatorians for the Class of 2020, graduating with a bachelor’s degree in international relations and a minor in environmental studies from the USC Dornsife College of Letters, Arts and Sciences.

“Everyone has the potential to reach their highest academic heights,” he said, “as well as explore their full set of non-academic extracurriculars.”

The path of this 2020 salutatorian was shaped abroad

For Kim, he began developing his USC identity at an early age, before even thinking about becoming a Trojan. Growing up Korean American in San Diego, he said he could only really find Korean culture — outside his home — in a few spots around town.

“I clearly remember many times in elementary school feeling almost too Korean to be a full American,” he said.

Then his father’s job sent the family to South Korea for four years, where he found himself in the opposite situation.

“Living in Korea showed me that, even though I am 100% ethnically Korean, my social identity as a Korean American is drastically different from being a Korean in [South] Korea,” he said. “Living in Korea, I was too American to be Korean.”

Upon moving back to San Diego for high school, Kim found himself again feeling “too Korean.” However, this time he had a new appreciation for his situation — and that position of living between two cultures is what he said really set him up for his path at USC.

“If I didn’t have that experience, I don’t know if I would have been an international relations major,” he said. 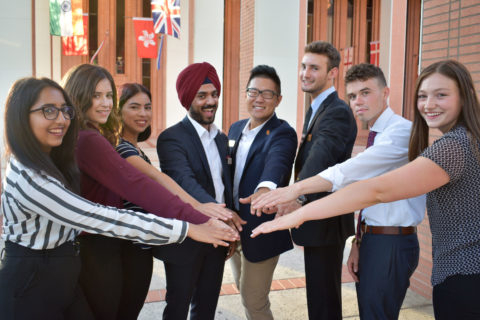 Fast forward to his time at USC: Kim said his first actual international relations experience in college came during the summer following his sophomore year. Kim was awarded a fellowship to conduct research in the Arctic for his “Problems Without Passports” class. The course focused on how climate change affects the regional politics of the Arctic as well as global politics in general.

The three-week course allowed Kim to travel to Finland, Norway and Iceland to research unsustainable tourism and policy solutions. That experience allowed him to tackle bigger issues while bringing together different voices, and it also reassured him of his career choice.

“Not only do you see the different players and perspectives, you see the various narratives that are shaped across governments, and across different sectors and industries,” he said. “That to me was incredibly eye opening and told me that this is what I want to do.”

Once Kim gets started talking about the Trojan Marching Band, it’s not easy for him to stop nor to pick just one favorite memory. The band kept him focused and organized, allowing him to travel across the country and turning him into quite the football fan.

“It awoke an obsession with American football that I didn’t know I had,” he said.

It probably didn’t hurt that, his freshman year, the Trojans went 10-3 and capped off the season with a last-second win over Penn State in the Rose Bowl.

Then, during his sophomore year, USC won a key matchup with Texas — a game at which Kim found a way to take a playful jab at one of Hollywood’s biggest stars.

“As with all Texas games, Matthew McConaughey was there,” Kim said with a laugh. “I just remember walking up to him and saying, ‘Mr. McConaughey, I love your work, but Fight On.’” 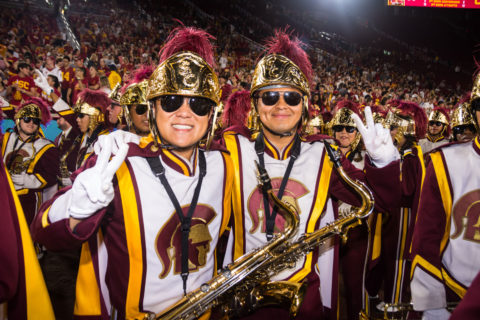 Kim, left, plays the tenor saxophone. He was a member of the Trojan Marching Band during all four years at USC. (Photo/Ben Chua)

Aside from big games and celebrity encounters, the band served as a motivator for academics. He credits his four years of band in high school for giving him experience multitasking before he got to USC. Between being a squad leader, having a full course load and serving as president of Delta Phi Epsilon — the international relations fraternity — Kim had enough to keep himself busy. Though, the way he views it, each of those helped with the other.

“I’m not the kind of person where I am just a member of several different organizations,” he said. “My personality is the kind where I really devote 100%, which helped me avoid spreading myself too thin.”

Perseverance, the final stretch and the next step

Looking towards his next step, Kim said he is still debating whether he wants to attend law school in a few years. In the meantime, he’ll study for the LSAT, but as evidenced by his undergrad career, he still wants to stay busy during the upcoming “gap years.” He has started looking at various graduate programs to hopefully further his education in public or environmental policy.

“I really just want to explore how I can bring together my interests of international relations, environmental studies and this aspect of the law, and use that to help the most amount of people,” he said. 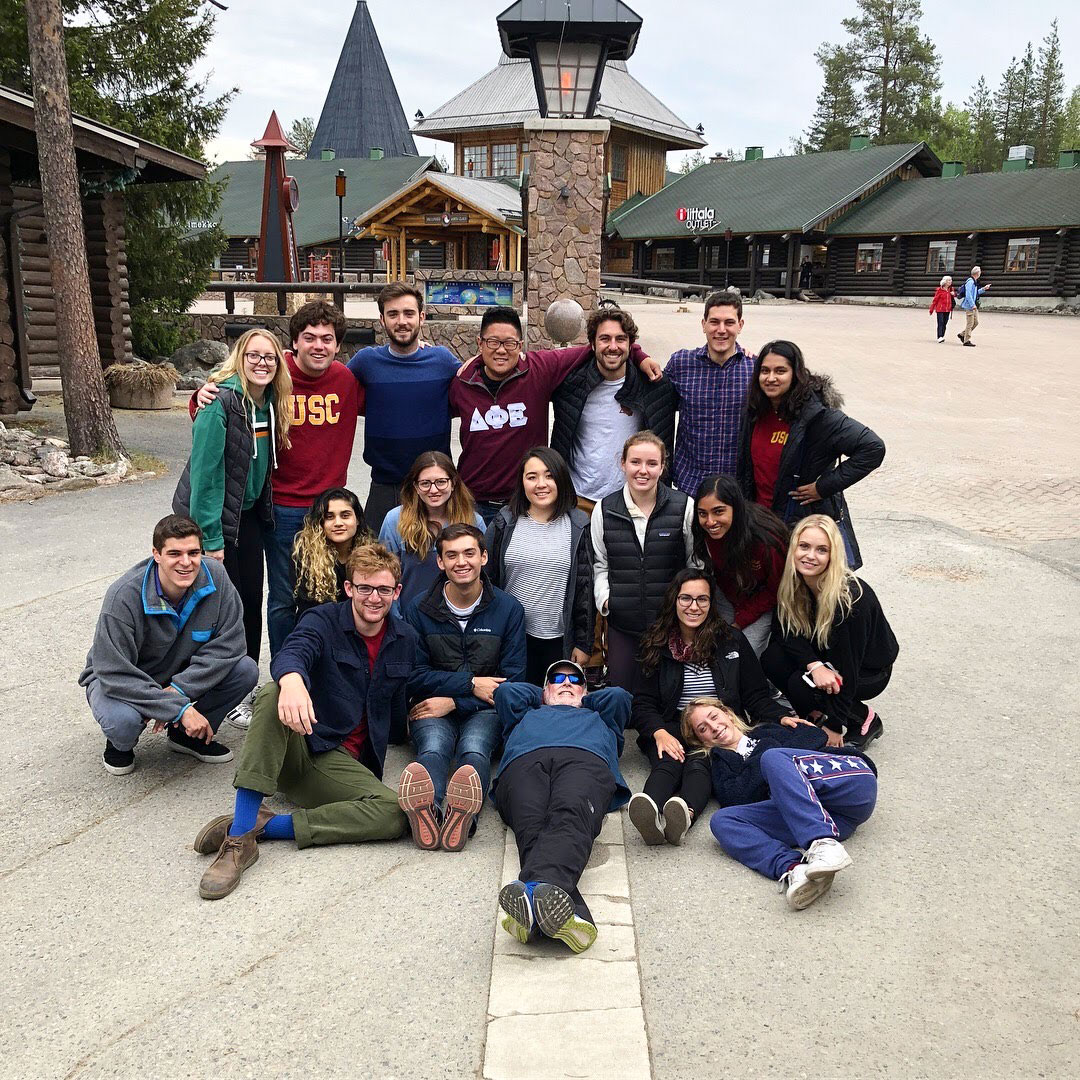 As he reflected on his collegiate experience, he has a special appreciation for those high points because he remembers his lowest moments just as well. Much like many college students, Kim had his struggles with mental health, so those academic achievements and big games mean a lot more to him considering what he went through to get there.

His first major low point came during one of his fondest memories. On the same trip to the Arctic in May 2018, a day after he had landed in Finland, Kim was told that one of his closest friends had passed away from depression.

“I personally felt a lot of guilt because I had spoken to her on the phone the night before I flew to Helsinki, and I couldn’t even tell,” he said. “From that point on, I realized mental health is not just a buzzword thrown around these days, but an incredibly real topic that is really not being addressed.”

The following fall, the still-grieving Kim began leadership roles in both the fraternity and the marching band — but perhaps his biggest accomplishment came after he admitted to himself that he needed help. At the encouragement of a class friend, he began seeing a therapist.

Kim said that step made him a better leader and mentor in both his fraternity and band and also helped him handle his tough academic schedule. He learned when to admit he wasn’t OK and understood that he had a support system that would help him get through anything.

“The most important value to me [from college] was I got to build a community first,” he said. “I would not be where I am now without my friends or my families on campus, and that to me has been the most important part of college.”

Gavin Kress’ road to Los Angeles consisted of thousands of miles and a stop at another school but ended with him being named salutatorian for the Class of 2020.