It took Mahagoney Borrayo-Gilchriest a while to figure out that, even when it doesn’t seem like it at the time, life can put you exactly where you’re supposed to be.

As the oldest of six — now a graduate student who will earn her master’s in postsecondary administration and student affairs from the USC Rossier School of Education next week — she admits that this was hard to see while growing up a “transient student” in Southern California.

“I was bouncing around between six different elementary schools after my mom remarried and moved to Pasadena and my dad stayed in South Central,” she recalled. “Instability was my stable and my normal.”

She applied to USC after high school in 2007. When she didn’t get in, she tried for a fresh start far away from home at the University of Central Missouri.

“That went terribly,” she said. “I was a black and Guatemalan girl in the middle of Missouri, and this was a pre-pronouns era when you had to choose your box and sit in it. I had a difficult time with that.”

It was also the period when startups like Mark Zuckerberg’s Facebook had convinced some in her generation that college wasn’t necessary for success. Borrayo-Gilchriest dropped out, moved to New Jersey and began working in retail.

But something was always tugging at her to return to school: “I love history. It’s my weird thing. I wanted to be an art museum curator or teach kids to love museums.”

Striving museum curator instead finds her calling in education

At age 24, Borrayo-Gilchriest was ready to chase that dream. Her husband was driving a supply truck for Caldwell University in northern New Jersey and managed to get her a meeting with its president. “I still wasn’t sure what I wanted to do so I was intimidated, but she connected me with the non-traditional transfer unit,” she said. 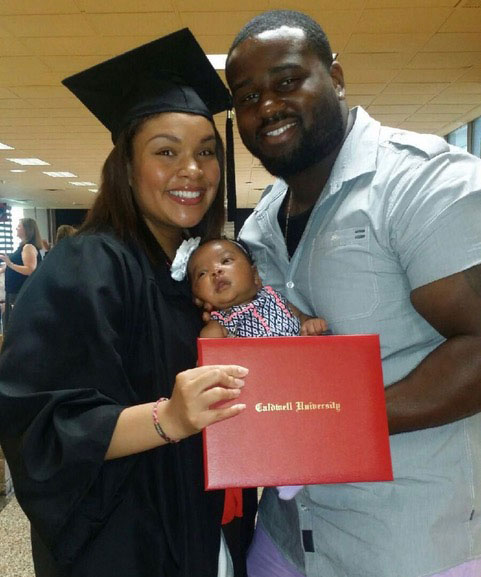 Borrayo-Gilchriest finished her undergraduate degree in New Jersey, where she taught for five years before coming to USC for her master’s degree. (Photo/Courtesy of Mahagoney Borrayo-Gilchriest)

In a little over a year, Borrayo-Gilchriest had finally earned her bachelor’s degree in history and walked across the stage at graduation with her new baby in her arms. During the subsequent five years, she taught history at an urban New Jersey high school.

She still reflects on how she found her calling in education, shaping and inspiring young minds.

“I may not have become an art museum curator, but I realized I do curate museums of life all of the time,” she said. “These students are walking pieces of art that I got to be a part of. I’m not the only artist, but a part of me is in the canvas.”

While teaching was rewarding, she missed her family — all of whom were in California. She decided to give USC another shot, this time for a master’s degree.

“I decided if I got in, it would be a sign from the universe for us to go home to California,” she said.

On February 28, 2019, she says, the universe had spoken: “My life had come full circle. I had a new appreciation for being stable and I was ready for USC. At the age of 18, I was not ready for ‘the Harvard of the west.’ With everything I’d gone through as a nontraditional student, a wife and a mother, I realized I was prepared for that moment.”

Returning to L.A. — and USC — let Borrayo-Gilchriest embrace being a student

Borrayo-Gilchriest brought her family back to L.A. While studying at USC, she worked in the Office of Residential Education, developing positive communal relationships for USC students, designing programs that build their emotional intelligence and learning new tactics to bridge the gap between high school and the new generation of minds entering college.

Her favorite aspect of being a student at USC, though, may have been just being a student. It is an identity the 31-year-old was given permission to explore in USC cultural centers like the Center for Black Cultural and Student Affairs (CBCSA) and La CASA Latinx Chicanx Center, where she also embraces the intersections of her cultural heritage.

Now I recognize that I can do this, and this is exactly where I am supposed to be.

“As a professional graduate student, it’s been a refuge and a comfort for me to come into CBCSA and hear, ‘Be a student, relax, write your paper,’” she said. “And I’m a frequent flyer at La CASA. I’m like the freeloading aunt; they’re always offering me a coffee or tea.”

“I don’t see boxes with the young people today; there’s so much intersectionality,” she added. “I can live with all parts of me and not feel that I’m disconnecting with any other part. Students today and these centers taught me that.”

Borrayo-Gilchriest, who once thought college wasn’t in the cards for her, notes with glee that she recently learned she was accepted into USC Rossier’s doctorate in education program.

“I didn’t get the four years I’d wanted in 2007, but now I am going to get four years at USC,” she said. “This was never the plan or the end goal. It was always, ‘Maybe one day I’ll get a doctorate.’ Now I recognize that I can do this, and this is exactly where I am supposed to be.”