On April 29 and May 1, the graduating high school seniors of the USC Leslie and William McMorrow Neighborhood Academic Initiative gathered online to celebrate their college decisions. The year 2020 was a big one for the program, as it marked the first graduating cohort from the neighborhoods surrounding the USC Health Sciences Campus.

“We have been anticipating this day since many of you were in the sixth and seventh grade. This has been a journey,” said Kim Thomas-Barrios, senior vice president of educational partnerships. “Undeterred even by a pandemic, you have done it.”

The university’s premier college prep program watched its graduating class double in size. Nearly 100 scholars — 96, to be exact — made their college decision, and universities throughout California were well represented. USC NAI scholars revealed their college choices, from Stanford and UCLA to a variety of schools in the University of California and California State University systems.

The program also exceeded the number of acceptance letters to USC.

“This year represents the highest ever amount of scholars accepted to USC from the NAI program since 1997,” Thomas-Barrios announced glowingly during the Zoom celebration. The USC NAI class of 2020 received 39 acceptance letters from USC, with 36 expected to accept their offers and attend the university in the fall on full scholarships. 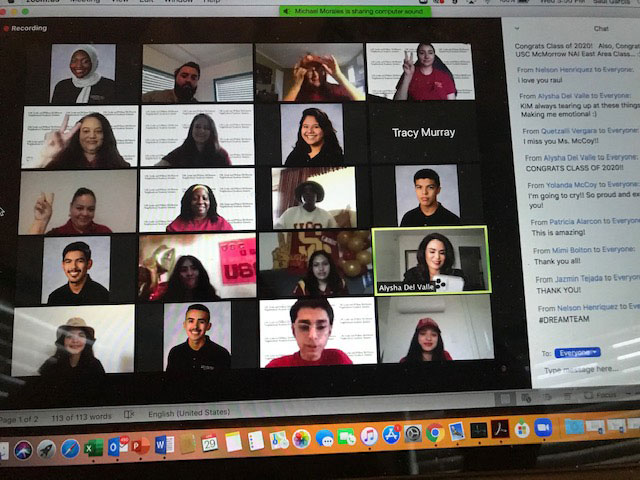 “The path that you walked to get here — working with you from sixth grade to now — has blown me away,” said Lizette Zarate, USC NAI program director. The majority of the students that will be attending USC will focus on STEM education.

Not lost in the celebration was the first graduating cohort from the eastern area of Los Angeles.

“It has been quite a journey, being the pioneers of this path in the eastern L.A. area,” said program manager Ivonne Rodriguez.

Nelson Henriquez Jr., who will graduate from the USC Leslie and William McMorrow Neighborhood Academic Initiative this month, has medicine on his mind.

Parents and graduating students from South and East L.A. shared breakfast and reminisced about their seven-year path through USC’s premier college prep program.