Between the three of them, they speak nine languages. All have family ties to Asia and grew up in the United States. On May 15, they’ll graduate and commission in the U.S. Air Force, launching military leadership careers in the midst of COVID-19.

Inkoo Kang, Sean Liew and Jong Su Kim are among a handful of USC Air Force ROTC cadets that comprise the Class of 2020. The three friends are so close that they can make each other laugh with just a gesture or an expression. They share a worldview that is both positive and realistic, yet each has his own story to tell. 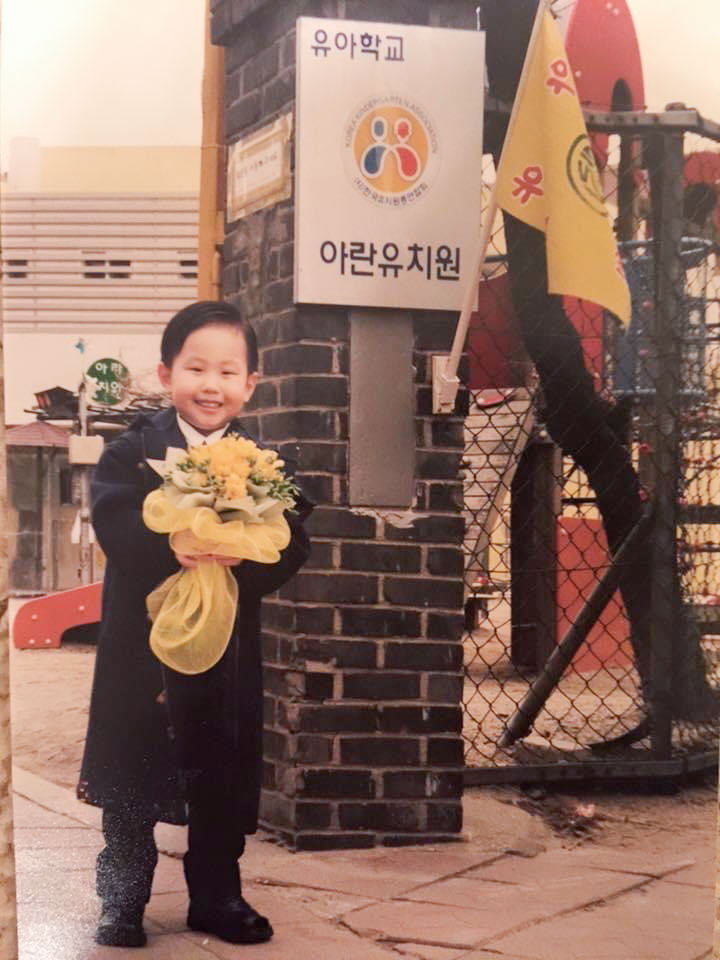 Inkoo Kang’s family emigrated from South Korea when he was 4 years old. (Photo/Courtesy of Inkoo Kang)

Pembroke Hill High School in Kansas City straddles the border of Missouri and Kansas, though you’re not likely to notice that as you walk across campus. The school’s unusual two-state property was never on Kang’s mind when he’d make the 45-minute commute each way between home and school.

“It’s a great place to grow up. There’s a magic to that place,” he said. He describes his young life as a “happy suburban bubble.”

“My family achieved the American dream after we came here from Korea,” he added, “and we were among the fortunate few who went through a simple immigration process.”

When he was 4, Kang’s parents brought their son and daughter from South Korea to New York, then Kansas City. When he was 13, his father returned to South Korea for professional reasons.

“That sort of ripped the Band-Aid off, made me grow up fast and forced me to lead from a young age,” Kang said. “Before he left to go back to Korea, my dad told me I was the man of the house. I couldn’t let the family down, and that still resonates.”

A talented high school football player, Kang received offers from Division II and III colleges. Though he loves the sport, he chose to channel his energies into other pursuits. 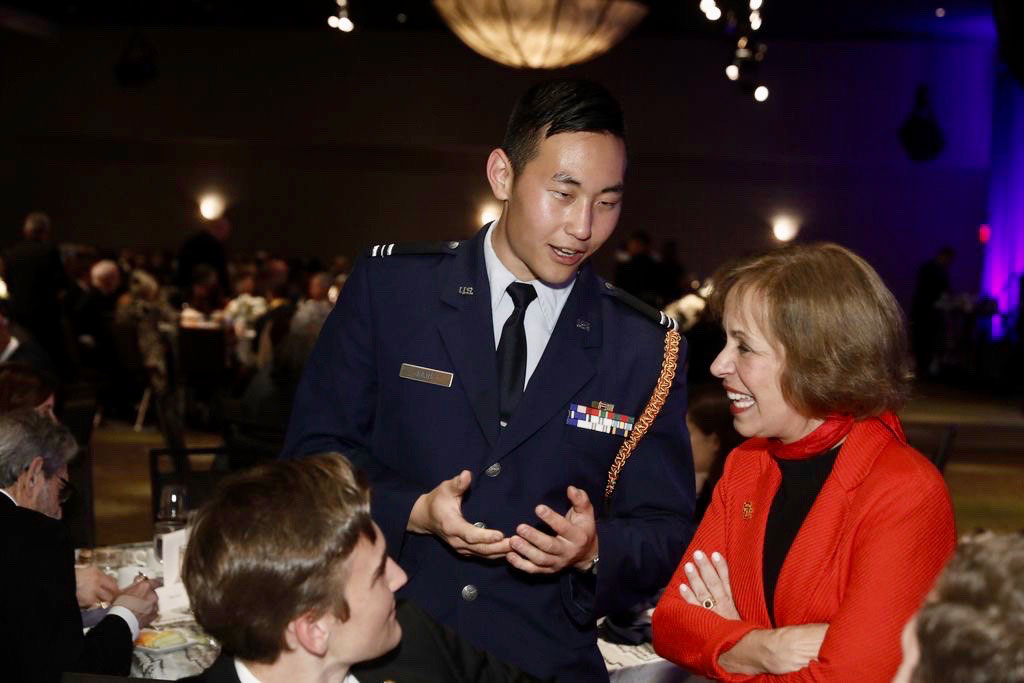 Admitted as one of the first ROTC Warren Bennis scholars at USC in 2016, Kang is modest about his list of impressive accomplishments. He is fluent in three languages and recognized as a distinguished graduate of Air Force ROTC, an honor reserved for the top 10% of all graduating cadets in the United States. He has a slot to become an intelligence officer, and he will head to San Angelo, Texas, after he’s commissioned.

“I’m curious, I’m ambitious, but I’m also very grateful,” he said. “Very few have the education I’ve had or the parents I’ve had. I’m going to serve the greatest military in the world. It’s something I believe in.”

Sean Liew: Piloting in a time of instability 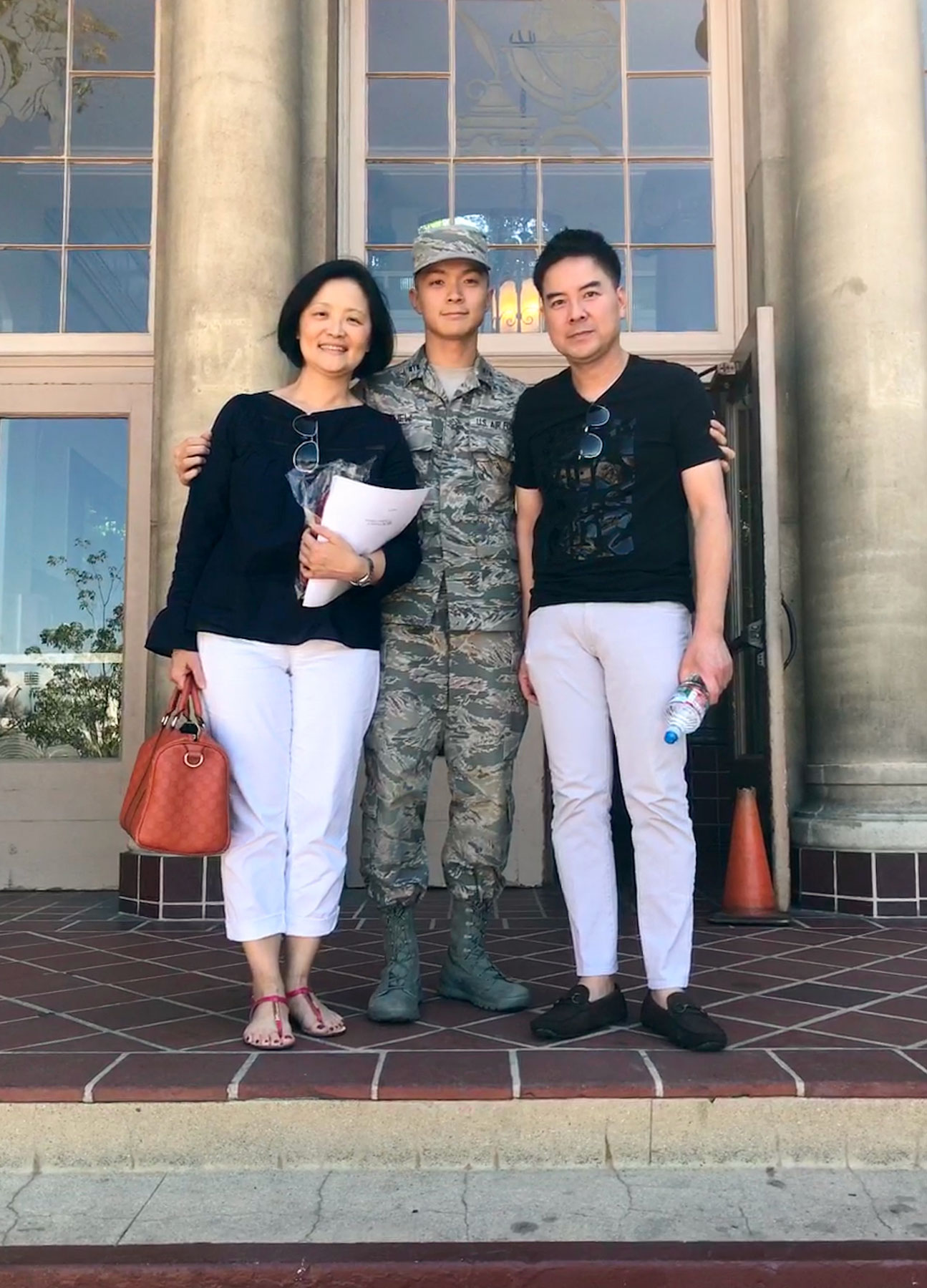 Sean Liew will begin training as a pilot in the fall. (Photo/Courtesy of Sean Liew)

“I’m always looking for the next thrill, and my parents had to put up with that,” Liew said as he prepares to graduate. The first in his circle of relatives and friends to join the military, he honors commitments to family and the Air Force.

“It’s natural for parents to worry about your safety, so you need to pull them in and bring them on board,” he said. “It’s not just the person who’s serving that’s involved. The whole family is in it. You can’t just push them away and say, ‘You wouldn’t understand.’ Their No. 1 goal is to have me doing what makes me happy.”

Born in Hong Kong, Liew emigrated with his family when he was 4.

“I struggled growing up. Kids made fun of me, as kids do, because I didn’t speak English. That sort of thing allowed me to become the person I am now,” he said.

Liew joined Air Force ROTC after he enrolled in a community college. Two years in, he transferred to USC.

“It brought together the best of both worlds: USC and my dream of flying,” he said. “It had seemed far off, something you only see on TV, and then I found a path to do it. It’s mind-blowing, the opportunities that are here if you are willing to work and have the vision for yourself.”

It brought together the best of both worlds: USC and my dream of flying.

After Kang served as Air Force ROTC wing commander during the fall semester, Liew took over the position and led 82 cadets for the spring semester. There was no way he could know what was coming.

When stay-at-home orders suddenly took effect, Liew jumped into action. Vital Air Force ROTC training had to continue. It’s dependent on practical application and close interaction, with upperclassmen leading underclassmen. There was no precedent to take that process into a virtual space, and Liew had to do it in a matter of days.

“There was no playbook, and nobody handed him a plan in a pretty white binder,” said Lt. Col. Reid Wynans, commander of Air Force ROTC Detachment 060. “It’s a hard job anyway, and he was thrown into this uncertain environment. He had to find a way to keep the cadets in his charge eager and hungry to continue their training. And he had to build cadet resiliency during this pandemic, because that resiliency underpins everything we do. As great leaders do, Sean adapted and excelled from Day 1.”

The only one of the trio who will train as a pilot, Liew starts training in the fall. He believes the COVID-19 pandemic has forever changed both the world and his future as a service member.

“It’s more than just a disease or a virus,” he said. “It will have long-term destabilizing effects. Being in the military, we’ll be at the forefront of that, making sure the United States stays safe, and we take that very seriously.”

Jong Su Kim: At a young age, understood the value of the military

Unlike his two colleagues, Kim began life in the U.S. Born in Yuma, Ariz., he moved with his family to San Diego as a child. His father worked in Mexico, and the two saw each other only about once a week. 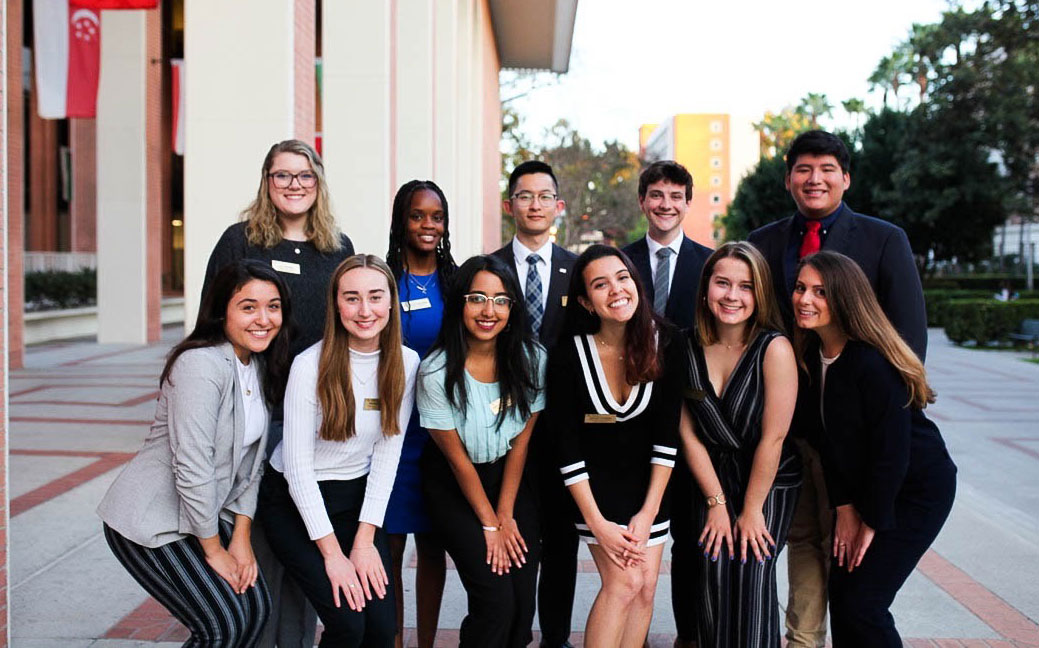 “Growing up, my dad would say, ‘Repeat after me: I’m joining the military,’” Kim said. “That sort of thing can have the opposite effect on a kid. But my parents’ view of the military is a bit different because service is obligatory in Korea. It’s not viewed the same way, not valorized like it is here.”

A bit more reserved than his two colleagues, Kim spent his first year at USC “ROTC free.” He started his college career with an interest in public service and diplomacy, then started considering Air Force ROTC after talking with a friend in the Naval Academy.

“She said it was hard but not impossible,” he said. “I started thinking about military service. It’s something I can begin now, not something I can start later in life. I either hop on as a young man or I never do. So I did.” 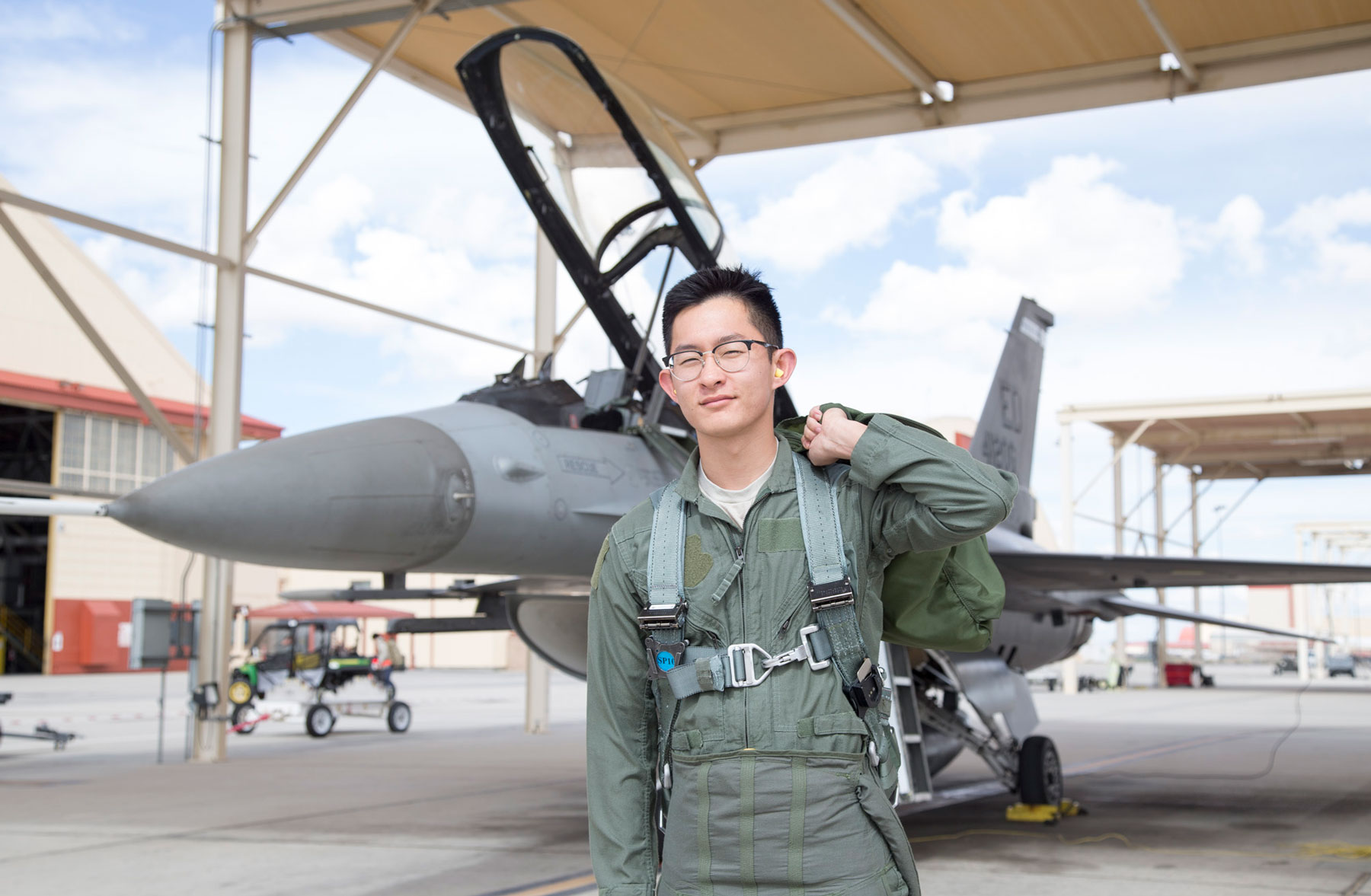 Kim and his colleagues are preparing to commission during COVID-19. (Photo/Christopher Okula, U.S. Air Force)

Like Kang, Kim is headed for Goodfellow Air Force Base in Texas to train as an intelligence officer.

“Most of my graduating friends are scrambling, and they don’t know if or when they’ll have jobs,” he said. “Commissioning in the midst of COVID, we’re entering one of the more secure workforces because it’s tied to national security. This is what we signed up for.”

Kang, Liew and Kim are graduating with degrees in international relations from the USC Dornsife College of Letters, Arts and Sciences. Kim has also earned a master’s in geospatial intelligence. All three plan to join the virtual conferring of degrees on May 15 and will return to campus for the postponed commencement ceremony if they can.

“I won’t be able to share that with my parents, that moment of gratification when you thank your family for all they’ve done to get you to this point,” Liew said. “There are worse things, and we’ll have some kind of celebration, but that’s what disappointed me the most.”

Kang, who describes the situation as a bump in the road, is aiming for a makeshift commissioning ceremony at Fort MacArthur with Lt. Col. Wynans.

“We’ll practice social distancing, and we’ll Zoom the family in,” he said. “We’ll see what we can make of it.”