A simple T-shirt aimed to unify members of USC’s football team who are scattered across the country. But the “We Fight as One” shirt grew into much more. 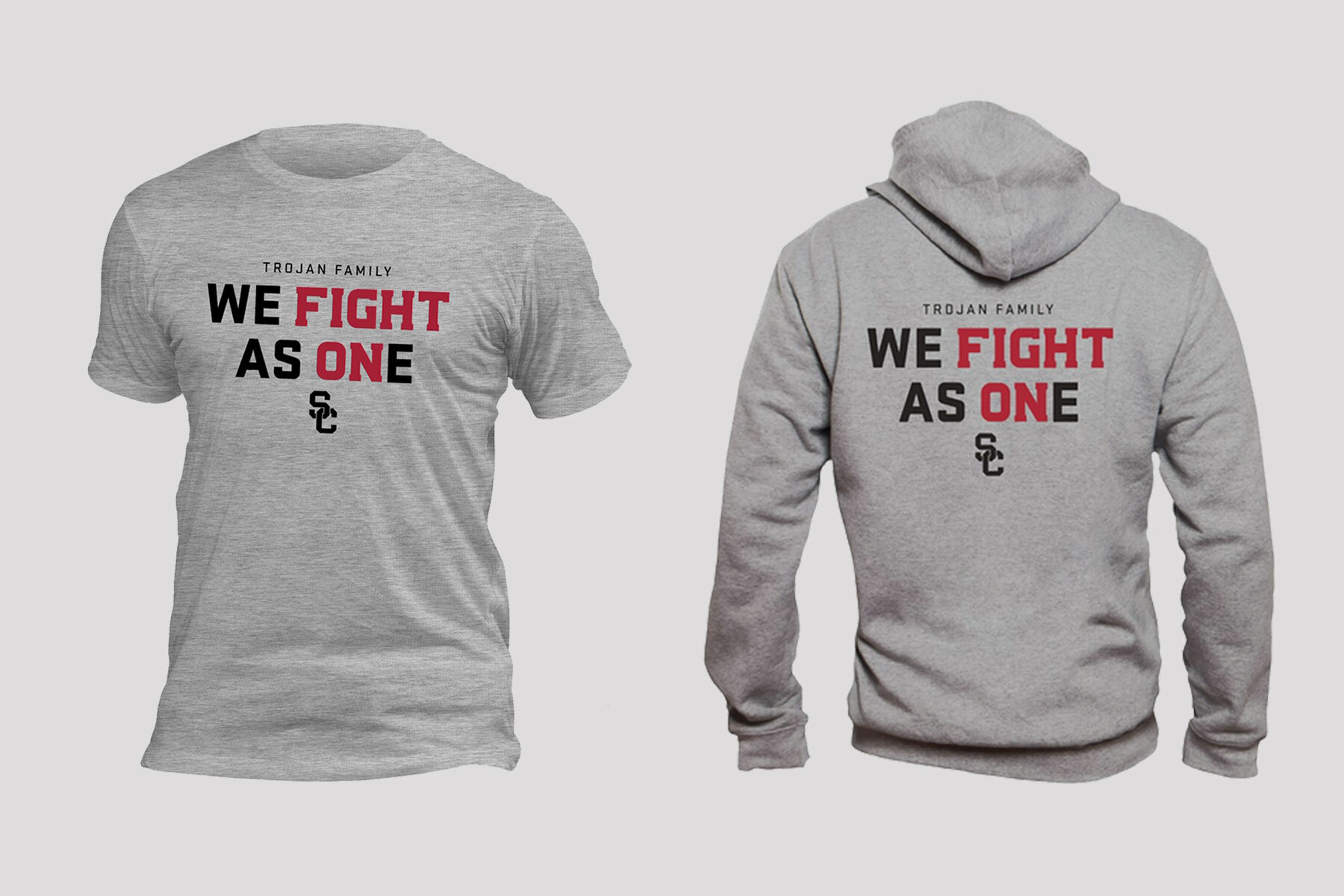 The We Fight as One shirts aim to build spirit and unity among the Trojan Family. (Photo/Courtesy of USC Athletics)

Last Friday, boxes stuffed with nearly 2,500 T-shirts and sweatshirts bearing the We Fight as One slogan and a USC logo landed at Keck Medical Center of USC in east Los Angeles. Hospital staff will distribute them to Keck Medicine of USC health care professionals just in time for Nurses Week from May 6-12. And thousands more are coming.

For each We Fight as One T-shirt sold through USC Bookstores, one tee goes to a Keck Medicine caregiver — from respiratory therapists and physician assistants to doctors and nurses. It’s a way to say thanks during the COVID-19 pandemic.

“Keck Medicine always takes great care of our student-athletes,” said Jeff Fucci, associate athletic director. “So this slogan became a rallying cry to express our support. We’re so appreciative of their dedication and courage.”

We Fight as One USC shirts catch on

The effort started in early April and aimed to build spirit and teamwork among football players thousands of miles apart. A designer in USC Athletics created the artwork, and Athletic Director Mike Bohn had a larger vision for the shirts to go to all student-athletes, coaches and staff in USC Athletics.

On April 16, a local vendor mailed the shirts from Burbank to more than 700 addresses across the country and world. Each packet contained an uplifting letter of support from Bohn. It was the first time USC Athletics created the same shirt and unifying message for all 21 sports, coaches and staff, Fucci added.

USC athletes and coaches appeared on social media wearing the gear and using the #wefightasone hashtag. Soon, fans wanted to know where to get the shirts. The message and enthusiasm got the attention of Darren James, director of USC Bookstores, and Dan Stimmler, vice president of USC Auxiliary Services.

“The bookstore is uniquely positioned to express the emotions we feel as Trojan Family,” James explained. “We really are about expressing pride.”

Over the last 18 to 24 months, USC Bookstores — part of USC Auxiliary Services — has looked for ways to build products based on the creativity of USC’s students and community. One such merchandise line is a collection of products designed by Macki Alvarez-Mena, a graduate of the USC Jimmy Iovine and Andre Young Academy.

A promise to help others during pandemic

But USC Bookstores also holds an ethical commitment. All proceeds from the sale of merchandise related to the COVID-19 pandemic must support a worthy cause. James cited the example of another popular T-shirt sold through the store: the Fight Online tee. Two USC Marshall School of Business students designed it as part of a grassroots campaign. Its profits go to support struggling Figueroa Corridor businesses.

The We Fight as One tees offered a similar chance to make a difference.

The logistics of a T-shirt campaign are no comparison to what the team at Keck Medicine does every day.

When USC Bookstores staff and Athletics aligned in supporting Keck Medicine caregivers through the shirts, that “kicked everyone into high gear,” Fucci said. “People jumped through hoops to get this done. Athletics staff and bookstore team members collaborated to advance this quickly. It was a great team effort.”

In addition to the T-shirt sales, each sweatshirt sold sends a T-shirt and a sweatshirt to Keck Medicine. Customers have bought nearly 3,000 shirts since the campaign started on April 22. Organizers expect to send more T-shirts and sweatshirts to Keck Medical Center in time for National Hospital Week on May 10-16.

Putting the project together so fast challenged the USC Bookstores and Athletics staff, but Fucci said it was worth it.

“The logistics of a T-shirt campaign,” he said, “are no comparison to what the team at Keck Medicine does every day.”

Wide receiver Michael Pittman Jr. told young students at an elementary school near USC that he wasn’t always the big man on campus, until reading helped him gain confidence.

From coast to coast and throughout China, an extended Trojan Family is gathering on apps like WeChat to leverage their contacts and collect much-needed supplies for USC’s medical professionals.

The USC-led study examined the shoulder assembly of Little Foot, an Australopithecus that lived more than 3 million years ago, and may have confirmed how our human ancestors used their arms.