A subtle and carefully orchestrated dance is taking place on USC’s University Park Campus: the slow exodus of thousands of students from university dorms and apartments. 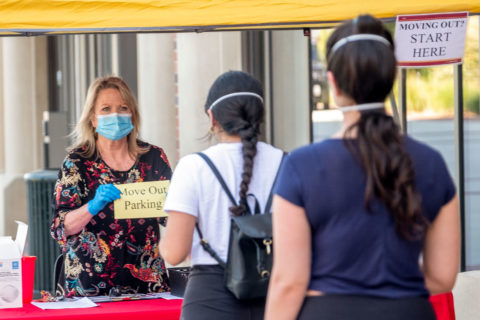 Heather Dunn checks in students on the first day of move out at USC Village. (USC Photo/Gus Ruelas)

The massive operation is almost imperceptible. A student rolls a bin of her belongings down the sidewalk to a waiting car. A parent pauses at a checkout table to ask a gloved-and-masked staff member how to drop off his son’s keys. If a line forms at an elevator or stairwell, residents take care to keep a safe distance apart and wait until the way is clear.

It’s precisely the kind of low-key affair Chris Ponsiglione and a dedicated team of housing and health and safety employees had hoped and planned for.

Many students will return to the University Park Campus in May to pack up and move out of university housing, but nearly a fifth never left — and some will remain after the semester ends.

About 1,500 people stayed in student housing under exemptions through the end of the spring term.

Many are graduate students and families who rely on USC housing as their primary residence. Others are international students unable to return home due to travel restrictions.

Those students are encouraged to review their summer housing options, as outlined on USC’s coronavirus information website.

“So far, so good,” said Ponsiglione, director of USC Housing. “We’ve had 200 people move out on one day this week. If you didn’t know what you were looking for, you wouldn’t have noticed.”

When thousands of USC students left campus for spring recess in mid-March, they likely had no idea they wouldn’t be allowed back for a month and a half. But the rapid spread of COVID-19 — and the need to reduce that spread by keeping people apart — changed everything.

It also left USC Housing officials with a vexing problem: how to let 4,000 students safely return to collect their belongings. After consulting USC health and safety experts, they devised guidelines and an online appointment system designed to protect everyone’s health and well-being. On April 27, the first students returned to their rooms to pack up everything from sweatshirts to surfboards.

“Following the protocols put out by the state and county, we’ve been posting signage at all building entrances that you need to have face coverings, practice social distancing and make sure hand hygiene is being followed,” said Dick Sun, deputy director of USC Environmental Health & Safety.

Added Ponsiglione: “We have all the doors open during move-out hours for low touch, all the social distancing markings on the floor and heightened cleaning by our custodial staff that has been ongoing since March. The idea here was to meet the demand while doing our best to maintain safety.” 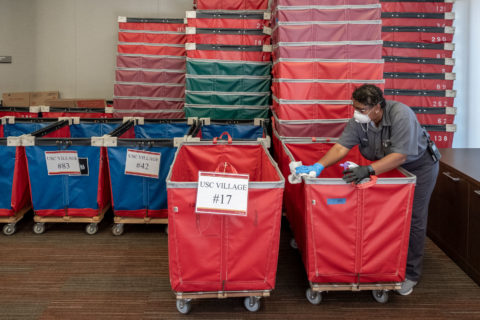 Other preventive measures include an array of hand sanitizer stations around campus. Express checkout forms and envelopes ensure students avoid contact with housing workers as they drop off keys and keycards. Housing staff members monitor the process and encourage everyone to comply with safety guidelines. And only one family member or friend is allowed to accompany each student inside to help with the move.

Thoughtful planning pays off with safe move-out process at USC

In a normal year, USC Housing helps 4,000 to 6,000 students move out during the final week of exams in early May. This year, officials are spacing out the process over a month, through the end of May.

The appointment system ensures no more than 25 people move their belongings from any one of USC’s 51 housing facilities per day. Ponsiglione said appointments are also scheduled to ensure people aren’t leaving the same floor at the same time to further limit possible crowding. 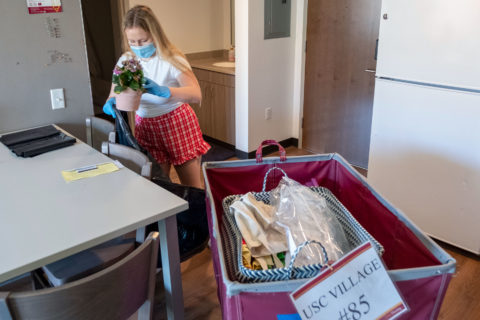 “So far, the compliance is good,” Ponsiglione said. “People seem happy to come and get their stuff, so they are following the rules. A good indicator is we’ve had very few people, if any, show up without an appointment in the first few days. That’s rare.”

Those unable to travel back to campus can request their belongings be packed and stored until they can safely return to collect them. That process will begin once move-out appointments end. Students can send an email to housing@usc.edu for more information.

And even as they cautiously shepherd thousands of students out of university housing, USC leaders are considering the future.

“We’re developing protocols for restarting campus,” Sun said. “We’re going to have to do more cleaning once we open the campus again and students and employees start coming back. There’s a lot of planning with action lists we’re already putting together.”

Amid stay-at-home order, USC to host virtual career fair for students and alumni

The online fair, which will take place Thursday, allows job-seeking Trojans to maximize their time with multiple employers from around the world.

Students, professors and staff members flock to Mindful USC online to learn to meditate and build compassion and kindness. The goal: easing strain spurred by the new coronavirus.