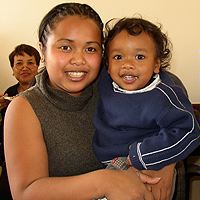 During the week of commencement, receptions dotted the USC landscape, all celebrating academic milestones.

One special gathering of graduates and their parents marked an educational journey of not four or six years, but something that began when they were 12 years old.

As seventh-graders, these students enrolled in USC’s Neighborhood Academic Initiative, an intensive college prep program for students in USC’s family of local schools. It’s not for straight-A students who will succeed without help, but for motivated kids who have the will but need a support system.

When a seventh-grade student signs a contract with NAI, so does the family.

Completion of the six-year NAI program with competitive grades and SAT scores earns admission to USC and a full scholarship for 4 1/2 years.

“Many of the students take the full 4 1/2 years, so they’re off the graduation cycle and don’t all graduate at once,” said Abi Ingleton, who has organized the first NAI Scholars reception. “There was never any formal ceremony acknowledging the accomplishment.”

Ingleton is the director of USC’s Undergraduate Success Program. This collegiate arm of NAI provides academic advising and special counseling for the students, who often are the first in their families to attend college.

Jasmine Tigolo, who earned her general studies degree from the Rossier School of Education, addressed the group at the reception. She concluded with a round of thank-yous to her mentors and family: “Thank you, Mom, and sorry for the white hairs I put on your head.”

Tigolo entered USC with a plan to major in biology but didn’t take to it.

“I was like, ‘I’m ready to drop out, I hate this major,’ “ she recalled. “My adviser asked, ‘What’s in your heart of hearts?’ And I knew I wanted to work with kids and to be a teacher.”

The birth of her son, Romell, now 2, led to a leave of absence for Tigolo.

“Everyone else made me come back,” she said, laughing. “ [The birth] wasn’t going to stop me.”

Another honoree, Gloria Campos, just received her B.A. in political science and will be applying to law school: a traditional-sounding end to a hard-earned degree.

Campos, now 21, withdrew from USC when she became pregnant with daughter Vanessa, now 2 1/2. During her pregnancy, Campos contracted lupus, for which she has been hospitalized.

“They did my paperwork for the medical leave,” Campos recalled. “The ‘team,’ that’s what I call them. They shaped my life.”

Her mother, Marta, added in Spanish, “The program gave a great opportunity to the people who really wanted it. They didn’t have to be the smartest, but they had to really want it.”

Tobey has known the students since they matriculated. “They’re very special to us, because they’re first-generation college students,“ said Tobey, herself the first in her family to attend college.

She credits the parents and USC faculty for the students’ success, but most of all the students themselves: “They persevered,” she said.

Also recognized was Johnny Toledo, who is scheduled to graduate in May 2004. Toledo is one course shy of his cinema-television degree, a required class that will not be offered until spring term.