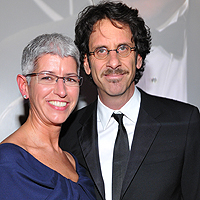 The event, sponsored by the Friends of the USC Libraries, drew a crowd of more than 300 to Doheny Library. Tony Award-winning actor Jason Alexander served as emcee for the evening, and a number of luminaries were on hand to honor the winning writers.

Alexander said, “2007 was a fruitful year for adaptations. More films than ever before were eligible for Scripter consideration. We had sweeping war epics, polar bears with magical armor and a phalanx of Calvin Klein models fighting for the honor of Sparta.”

Dean Catherine Quinlan of the USC Libraries said, “The art of adapting a novel into a screenplay � and in turn, creating a film � is an apt expression of the discovery and creativity that the library makes possible. For the act of adapting transforms one type of writing into another … one way of understanding the world into another.”

Glenn A. Sonnenberg, president of the Friends of the USC Libraries and a member of the USC Board of Trustees, co-founded the award with Marjorie Lord in 1988.

“The talent of writers like Cormac McCarthy, the Coen Brothers and Steven Zaillian is the real magic that lends Scripter its significance,” Sonnenberg said.

Gyllenhaal said, “Adapting a book for the screen is a delicate process, an art form. No Country for Old Men is a screen adaptation of great skill and precision by Joel and Ethan Coen, who have asked us to look at ourselves through their unblinking lens.”

In accepting the award, Joel Coen said, “With this film, we had the advantage of starting with a great novel by a great American writer, Cormac McCarthy. We would like to thank the selection committee and the Friends of the USC Libraries for this honor.”

Marking the award’s platinum anniversary, the USC Libraries honored Academy Award-winning screenwriter Zaillian with the inaugural Scripter Literary Achievement Award. The Friends of the USC Libraries created the prize to recognize writers who have made significant, sustained contributions to the art of adaptation.

“Screenplays based on books can be strange, schizophrenic creatures,” Zaillian said. “In successfully adapting a work of literature, we respect that which came before us � the book and the author � as we imagine what we as screenwriters would like to see on film.”

“No Country for Old Men is a powerful book and a powerful movie,” Zaillian said. “They’re both literature, and the screenplay is a literary accomplishment as well.”

The USC Libraries’ Scripter Award was created to recognize both the author and screenwriter behind the year’s best film adaptation of a book while raising visibility and support for the USC Libraries. Proceeds from the black-tie gala will support the creation of new spaces for instruction, collaboration and materials preservation.

Past Scripter winners include the authors and screenwriters of Children of Men, Capote, Million Dollar Baby, The Hours, A Beautiful Mind, L.A. Confidential, The English Patient and Schindler’s List.