When Hong Zheng looked at the photo, she knew she had to act.

The USC alumna and staff scientist saw a picture of Keck Medicine of USC staff members on the front lines of the fight against the new coronavirus and her heart went out to them.

“I knew I had to do something,” said Zheng, who first came to USC in 2014 as a visiting fellow from China. Wanting to keep the caregivers safe, she became one of a team of Trojans of Chinese heritage who delivered gowns, masks and other protective gear to USC medical workers.

By using social media, especially the WeChat app, hundreds of Chinese parents, staff members and alumni mobilized to help. They formed a network that stretched from Philadelphia to L.A. and across China, from Shanghai to Beijing.

As the volunteers began their quest, hospital officials nationwide were worried whether they had enough equipment. The expected surge of COVID-19 patients might outstrip their supply. In mid-March, Keck Medicine of USC put out a call for the community to contribute backup protective equipment, just in case it was needed.

After posting the photo on her Twitter feed, Zheng asked her South Pasadena parents’ group for support. The response was overwhelming: More than 200 volunteered to contribute. Some of them were alumni, others just friends of alumni, still others just wanted to help. 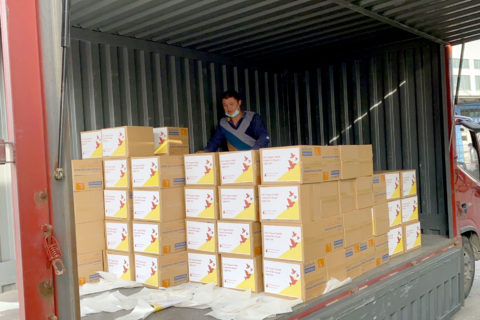 A nonprofit group in Wenzhou, China, donated thousands of masks to Keck Medicine while the group in Zhejiang sent hundreds of medical supplies of their own. (Photo/Courtesy USC Verdugo Hills Hospital)

The goal was to find and acquire protective equipment that adhered to the FDA’s strict standards and guidelines and then deliver it to USC faculty physicians and fellow health professionals at Keck Hospital of USC and Los Angeles County+USC Medical Center. These masks, gowns, gloves and other items could expand the medical centers’ overall inventory of protective equipment.

Zheng, who is a researcher at the USC Stevens Neuroimaging and Informatics Institute, soon became part of a broader online network of Chinese parents — many of them Trojans themselves — who wanted to help.

As word spread, Zheng also heard from two nonprofit groups in China that wanted to help — one in Wenzhou and the other in Zhejiang. China is the world’s largest producer of N95 masks.

Wei Gao, whose daughter is a sophomore studying animation at the USC School of Cinematic Arts, has been working as hard as Zheng for the same reasons — but from the East Coast.

Gao belongs to the WeChat group known as 2022, a reference to her daughter’s graduating class year.
The 2022 parents soon joined up with another USC WeChat group, 2023. Both groups were created by USC’s Chinese Students and Scholars Association to help keep Chinese first-year students and their parents informed.

I feel really proud and really lucky to have sent my daughter to USC.

“I feel really proud and really lucky to have sent my daughter to USC,” Gao said. “I know USC has a very strong alumni group, and alum parents are a very strong group, too. What we did was build a grassroots network.”

By April 13, this grassroots network had delivered 3,950 respirators, 370 surgical masks and 160 pairs of gloves, as well as a handful of medical gowns, safety glasses and goggles.

The 2022 group started by donating small packs of supplies to Keck Medicine, a few parcels at a time, and Gao says that will continue until the need subsides.

And with the help of Xiudi Li, another 2022 parent who lives in Shanyang, Gao created a new WeChat group to help funnel donations to Keck Medicine from many different WeChat groups. Members of these groups include Trojan parents of juniors, seniors and doctoral students.

WeChat is China’s largest and most popular messaging app. But few could have predicted how well the WeChat groups functioned in this battle against COVID-19 or how far their reach could extend.

Michelle Wang, who lives in Shanghai and whose daughter is a first-year student at the USC Dornsife College of Letters, Arts and Sciences, took the same path as Gao, coordinating the support effort through the 2023 group.

How to support USC’s health workers

Much-needed items include the following:

Keck Medicine of USC’s dedicated coronavirus website includes instructions on how to donate supplies or funds.

A third WeChat group was created for donors and given the name USC Fight On! Overall, 176 parents joined the money-raising effort, most of them living in China.

“So many parents had ideas and advice,” Wang said. “A few helped organize everything. The WeChat groups are private, but we got the word out to fellow USC parents. We then created a leadership group, and everyone had tasks. My job was to find resources. One volunteered her expertise as an accountant.”

Wang’s group next focused on how they could acquire and export the protective gear in a speedy manner. Their solution: Call USC’s Shanghai office, one of nine international offices the university operates through its Office of Strategic and Global Initiatives.

Evelyn Gong, the associate director in Shanghai, and her staff members were ready to help.

“A lot of parents here in China wanted to do something to help get essential protective equipment to Keck Medicine,” Gong said. “I brought it up with our head office in Los Angeles, and they arranged to have a colleague at Keck [Medicine] to be on the receiving end.”

Anthony Bailey, vice president for strategic and global initiatives, sees this effort as a unifying force.

“We are warmed to see the depth and dedication of the Chinese Trojan Family as they provide needed support to the USC community,” he said.

Wenting Wu, a USC Price School of Public Policy alumna, became the Shanghai office’s point person for the 2023 parents. The 2011 master’s graduate is the office’s director of employer relations and China career services.

“We’re very lucky to have Michelle and the other parents doing great things for the university, making things happen,” Wu said. “We make a good team — parents, alumni, university staff. We’re all really proud to be part of the Trojan community.”

Wu turned to a member of that community for help: USC Marshall School of Business alum Steven Du, whose company CY Group is based in Shanghai and was already approved to export medical goods. Du graduated from USC Marshall’s Executive MBA program in 2017.

In the latest shipment, 75,000 pairs of FDA-approved medical gloves destined for Keck Medicine left Shanghai on April 10 and arrived at Los Angeles International Airport over the weekend.

“We’re very proud of our Chinese parents’ group,” Gong said. “USC is thrilled to have so many parents reaching out to help. They’ve been doing a wonderful job of supporting our university at a very difficult time.”

The Pasadena museum turned its parking lot into a drive-thru donation center to protect Keck Medicine of USC health care staff on the pandemic’s front line.

Hundreds of faculty and staff members, students and volunteers are building face shields and respirator masks to answer the call from USC’s medical leaders.

USC-supported community network is ready to respond in South L.A.

The Community Response System of South Los Angeles supports local organizations and provides long-term resources to assist with the COVID-19 pandemic and beyond.