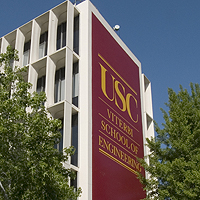 Under the tenures of deans Nikias and Yortsos, the USC Viterbi School’s graduate engineering program has consistently ranked in the top 10 in U.S. News & World Report.

USC Provost and Senior Vice President for Academic Affairs C. L. Max Nikias and USC Viterbi School of Engineering Dean Yannis C. Yortsos have been elected to the National Academy of Engineering, the highest professional distinction that can be accorded to an engineer.

The announcement comes on the heels of other distinctive honors for two USC engineers. Late last year, USC President Steven B. Sample and Nikias won the 2008 Founders Medal and Simon Ramo Medal, respectively, from the IEEE, a professional society dedicated to the advancement of electrical and computer sciences.

“This is a great day for USC, for USC engineering and for two of USC’s finest leaders, Provost Max Nikias and Dean Yannis Yortsos,” Sample said. “National Academy memberships not only testify to the superb achievements of individual scholars, they also serve as indicators of excellence for an entire university. Their election to membership in the NAE is a credit to them both, but it is an honor to the entire USC community as well.”

Nikias, an electrical engineer, is USC’s chief academic officer and the second-ranking officer under the president. He was cited for contributions to the development and diverse applications of adaptive signal processing and for leadership in engineering education.

Yortsos, a chemical engineer who is the Chester F. Dolley Professor of Petroleum Engineering and holder of the Zohrab Kaprielian Dean’s Chair, was cited for fundamental advances in fluid flow, transport and reactions in porous media applied to the recovery of subsurface resources.

Nikias has been on the USC Viterbi faculty since 1991, serving as dean of the USC Viterbi School of Engineering from 2001 to 2005. Before becoming dean, he was the founding director of the Integrated Media Systems Center, USC’s first National Science Foundation Engineering Research Center and the sole engineering research center for multimedia and Internet research.

Yortsos succeeded Nikias as dean of the USC Viterbi School in 2005. During their tenures as deans, the school’s graduate engineering program has consistently ranked in the top 10 in U.S. News & World Report.

As dean and senior associate dean, Yortsos conducted an impressive overhaul of the undergraduate curriculum, and the school has enjoyed significant gains in student strength and in the quality of academic programs for undergraduates.

Among the 65 new members elected to the NAE are Alexis Livanos, president of Northrop Grumman Space Technology and member of the USC Viterbi School’s board of councilors; Wanda M. Austin, president and CEO of the Aerospace Corp., who received her Ph.D. in industrial and systems engineering from USC in 1988; and John C. Martin, president and CEO of Gilead Sciences Inc., the father of one of Yortsos’ students.