A team of USC researchers has devised a simple but effective way to sterilize medical equipment in response to the urgent need for more safety gear for doctors and nurses treating COVID-19 patients.

Health officials report acute shortages of personal protective equipment (PPE), which becomes infected and needs to be replaced in order to treat patients safely. In the absence of new gear, they are searching for solutions to reuse existing equipment so they can prevent the disease from spreading.

Enter Andrea Armani and her lab team from the USC Viterbi School of Engineering. They specialize in the interaction of light and biology, especially biomedical devices, and also develop advanced materials and integrated optical devices for portable disease diagnostics.

Tasked by the Keck School of Medicine to find a solution, Armani’s team developed a virus-busting PPE disinfectant method that utilizes UV light to monkey-wrench the genetic code of coronavirus so it can’t replicate itself.

“Think of it as reimagining disinfection,” Armani said. “We’re using off-the-shelf items you can get at Lowe’s or home improvement stores to make a device that can kill bacteria and viruses.”

Armani is the Ray Irani Chair in Chemical Engineering and Materials Science at USC Viterbi. She also holds an appointment at the USC Michelson Center for Convergent Bioscience and the Lawrence J. Ellison Institute for Transformative Medicine of USC.

At its core, the method they devised relies on the widely known understanding that UV-C light kills bacteria and viruses. It’s the part of the light spectrum from the sun that is exceptionally efficient at destroying genetic material in almost any living thing. In nature, it doesn’t harm humans much due to the Earth’s protective ozone layer, which was a topic of great concern when a hole in the layer was discovered in the 1980s. 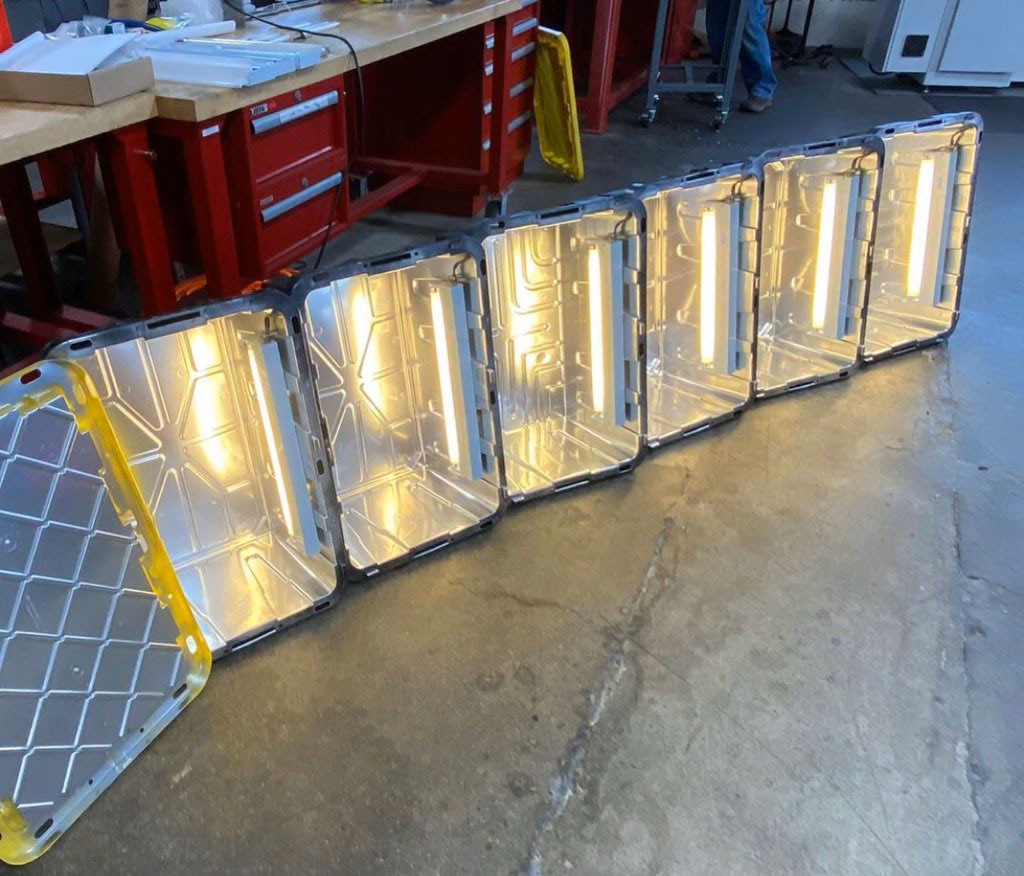 To expedite the effort, USC partnered with SMP Engineering, a Glendale-based firm, to build the boxes that USC designed. The public-private partnership — and the participation of the Keck School of Medicine — was key to moving the project from conception to completion in just a few days. In the end, it resulted in a product designed to reduce costs and expedite mass production.

“We distilled this project to its essential components, then looked for parts that were readily available,” said Andreas Schubert, chief executive officer at SMP Engineering. “Using this approach, we were able to build a system using plastic storage boxes spray-painted with a reflective coating and mounted with a 15-watt UV-C bulb.”

The researchers found that, within one minute, most of the bacteria colonies exposed to the light were totally destroyed.

“We used a hardy organism [B. cereus] because if that organism is disinfected, then you’re probably going to be able to destroy the viruses,” She said.

The findings are significant because the PPE disinfectant worked so well that it meets the FDA disinfection requirement of a 3 log reduction — about 1,000 times less microbes. 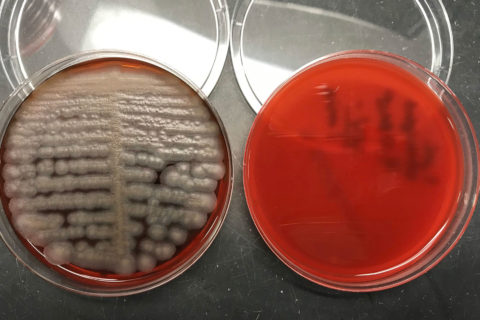 During tests of the sanitization boxes, the researchers found that, within one minute, most of the bacteria colonies exposed to the light were totally destroyed. (USC Photo/Andrea Armani)

So how does UV-C light affect viruses?

That particular spectrum of light alters the nucleotides, or building blocks, of DNA and RNA, the former found in bacteria and the latter contained in viruses. In RNA, the UV rays force the uracil and cytosine nucleotides to form dimers, or bridges, which disrupt the ability of a virus to replicate itself and spread. Ultimately, it’s a fatal blow to the microbe.

“This system is a perfect synergy of biology and physics,” Armani said.

The advantages of this technique are it’s fast, it’s simple to do and it uses off-the-shelf equipment for low cost. It can also be deployed at multiple locations quickly, making secondary disinfection a decentralized process.

However, the technique has only been tested for face shields, not other types of PPE. Armani said they focused on face shields because there’s an urgent need for that sort of disinfection and it was easier to work with hard, plastic surfaces. More testing on other materials would be needed before the technique could be considered for wider uses.

“Unlike masks that degrade and rely on filters for performance, face shields are a solid barrier that completely blocks particulates,” Armani said. “So, face shields provide complete protection, but are in very short supply.”

To benefit other hospitals, the research team has posted the schematic design for the technology and a summary of the research on an open-access website so it can be widely used. Armani said she’s already fielded calls from universities and hospitals around the world.

But as the saying goes: Do not try this at home. Armani cautions that UV-C light is dangerous and direct exposure can burn skin and mutate human DNA, which can lead to other health risks.

Coronavirus: Strategic National Stockpile was ready, but not for this

A USC Dornsife professor examines why the stockpile does not have nearly enough of needed supplies like ventilators and protective masks.

From virtual reality and machine learning to smartphone apps and supercomputing power, researchers are determining which technologies will be the most useful in the battle against the coronavirus.

USC Viterbi researchers join the global effort to develop a vaccine against the new coronavirus that could halt the pandemic.